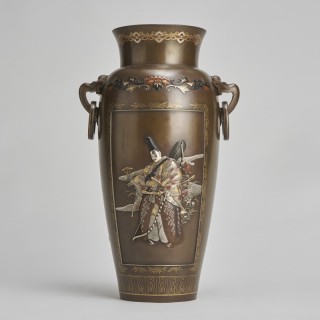 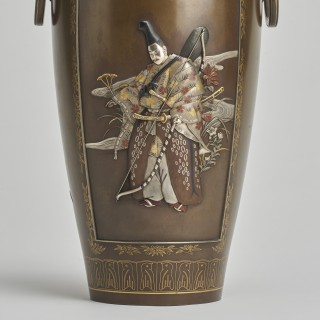 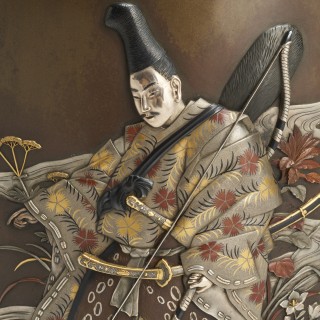 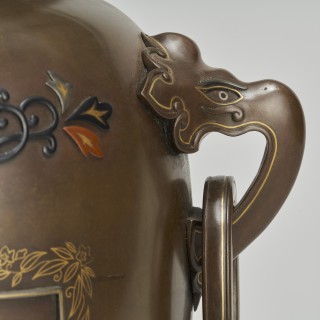 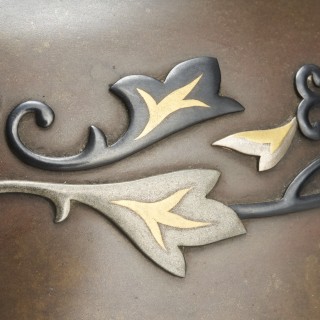 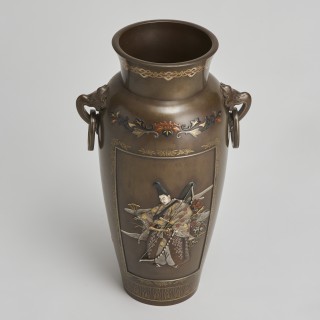 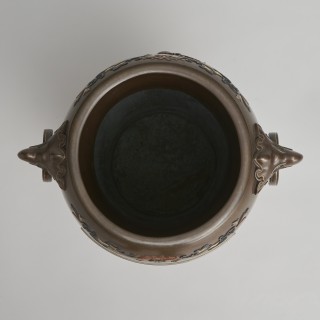 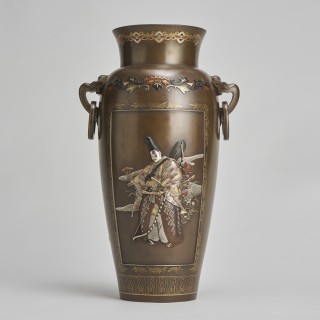 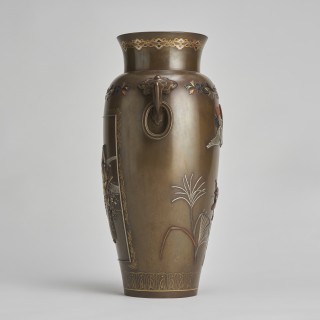 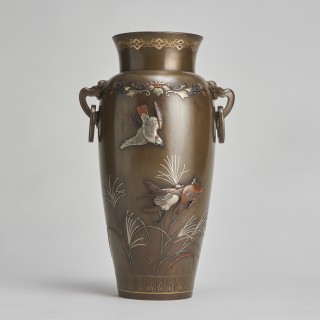 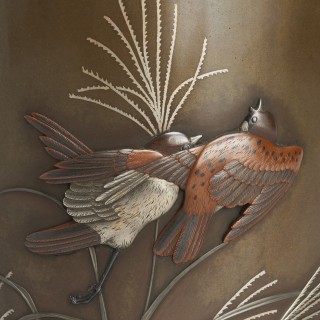 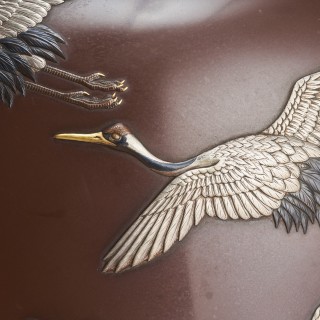 An exquisitely detailed Meiji Period (1868-1912) Japanese Bronze vase with inlaid and onlaid multimetal decoration.
One panel shows a wealthy and fashionable high ranking samurai archer, he is identified as a samurai from the pair of swords worn at his waist. He wears a Hikitate-Eboshi on his head, a hat adopted by the warrior classes as they rose to power, and deer skin can be seen around his waist, a popular and fashionable material in the 17th and 18th centuries.

The opposing side is decorated with an artistically accomplished scene of three sparrows in flight, the unusual angles and scientific accuracy of the portrayal makes it one of the best examples we have seen of this common subject.

Sparrows are a popular motif in Japanese art, birds in general represent longevity, but the popularity of the sparrow is probably due to the traditional fable of the tongue cut sparrow.

It tells the story of a kind woodcutter that finds an injured sparrow, so he takes it home and cares for it, the farmer goes out one day and asks his greedy and jealous wife to feed the bird while he is away. She does not, and while she is out the sparrow eats the store of rice, she is so angry on her return she cuts out the bird’s tongue and sends it flying back to the mountains where it came from.
The woodcutter returns and is very upset and goes looking for his friend, the other sparrows lead him to the Sparrow’s Inn where he finds the little, they sing and dance for him and offer him a choice of two baskets as a reward for his kindness, he is a humble man and chooses the smaller, and when he returns home he opens it to find it is full of treasure.
Once his greedy wife learns of the existence of the larger basket she returns to claim it, and opens it before she returns home, to her surprise it is full of dangerous snakes, it scared her so much she fell all the way down the mountain to her death.

The baku is a mythical Japanese chimeric creature which loosely resembles an elephant, it is said they eat nightmares and protect from pestilence and evil.

The famous samurai of Japan were a hereditary military nobility caste who help to shape and rule Japan from the 12th Century to their abolition in the Meiji period. In Japan samurai are known as bushi (meaning warrior) they we’re usually associated with a clan or lord and were highly trained officers in combat and strategy. They lived by the code of bushido (way of the warrior) which was Confucian in origin, and taught loyalty, self discipline and respect. They used many weapons including spears, bows and arrows and later on guns, but they are most famous for their swords. The Japanese Samurai blade is made by laminating metal (repeatedly folding) to create a very sharp but brittle edge which could then be combined with a central strip of stronger metal to create a blade. Despite being the best known use of this technique Japan only adopted it in the 1200’s, Western civilizations such as the Celts had been using this method 2000 years before. The right to own and wear swords in public was a privilege granted only to the Samurai, they would usually wear a Daisho (pair) of swords, one larger than the other, there are many sizes and classes of samurai swords but the most common pairing would be the Katana and the Wakizashi.