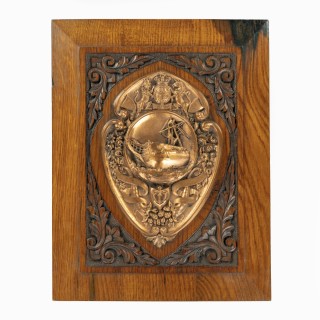 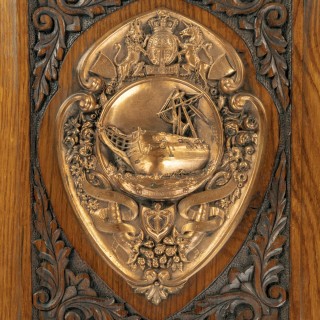 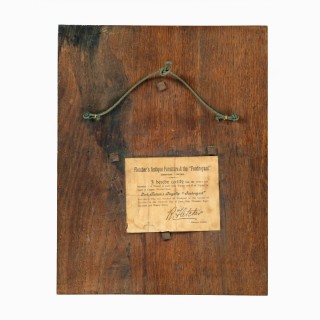 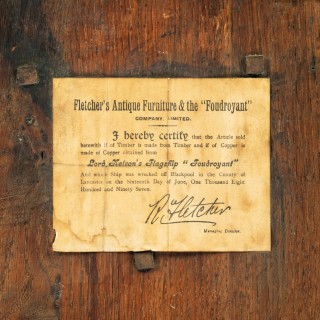 An H.M.S. Foudroyant copper shield, the embossed copper plaque with the coat of arms of Great Britain flanked by two shields, reading ‘Launched Plymouth 1789’ and ‘Wrecked Blackpool 1897’ above a central roundel showing the bow of the famous battleship, all against a field of flowers with four ribbons incised ‘Made from the Old Foudroyant’ and set on an oak panel, also from that ship. The reverse with a statement of authenticity from ‘Fletcher’s Antique Furniture & the Foudroyant Company Limited’. English, circa 1897.

Footnotes: H.M.S. Foudroyant (meaning ‘lightning’) was the 80-gun flagship of Admiral Lord Nelson from 1799-1800. Although a relatively short command, this was the period when he was involved with the King and Queen of the Two Sicilies against the French and when he met Emma, Lady Hamilton. The Foudroyant later served in many capacities, including four years in Rio de Janeiro. In 1892 she was due to be broken up, but instead was saved and restored at considerable cost to the Nation. In an attempt to recoup some of these expenses she toured the country as a maritime attraction. On 16th June 1987, while at Blackpool, she was wrecked by a hurricane force December gale.