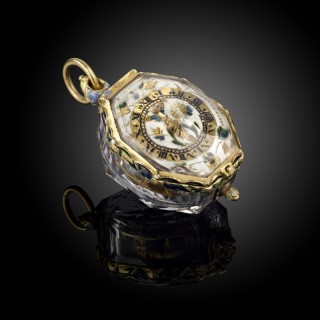 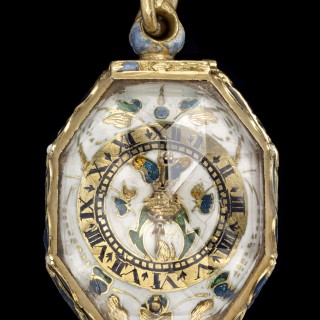 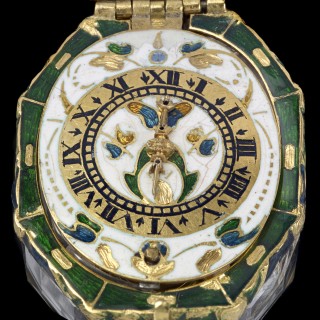 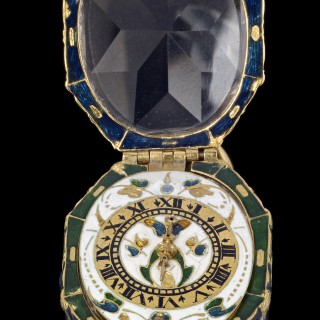 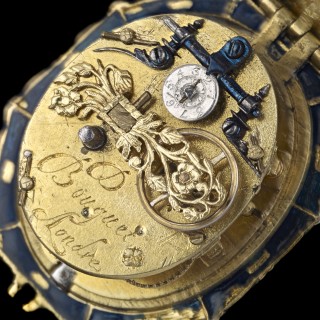 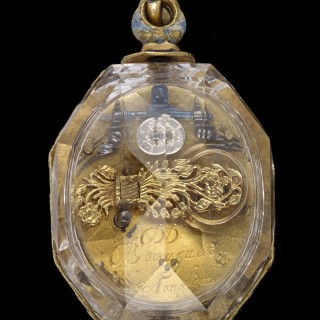 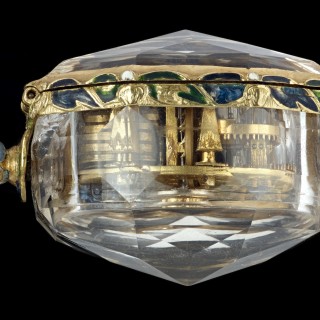 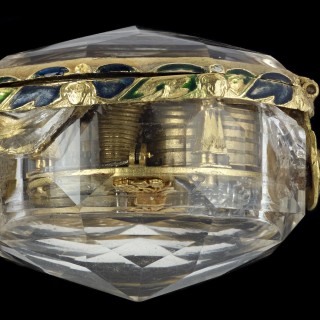 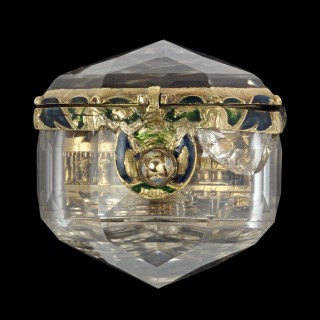 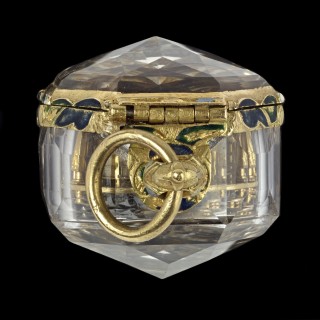 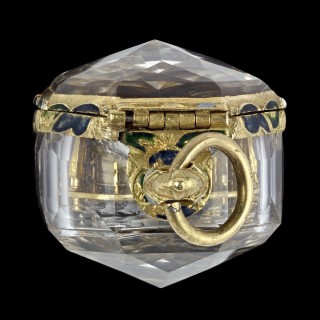 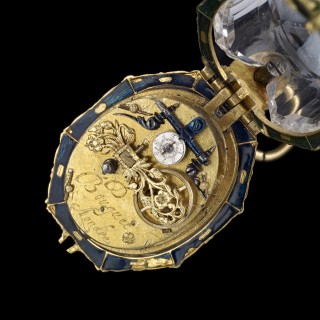 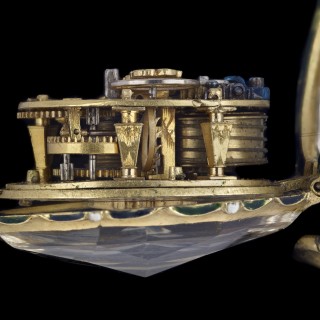 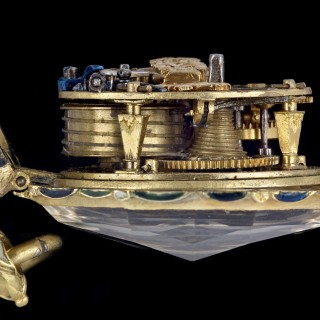 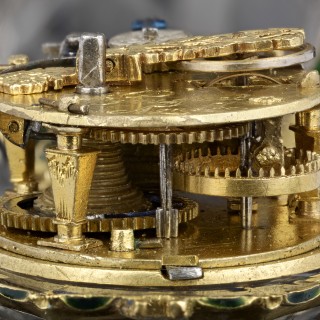 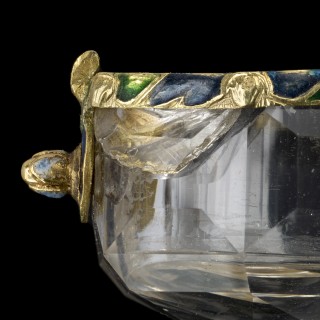 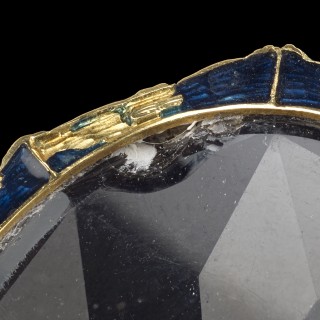 Oval gilt-brass pre-spring verge movement with engraved pillars, gut line fusee and worm and wheel set up; oval dial set with octagonal gold mount decorated with enamel tulips
and butterflies amongst leaves in colours of blue, green and orange, all against a white background.

Very few watches of this period have survived, and of those that have, most have had their original movement removed or replaced by a later one – see for example the one
illustrated in Terence Camerer Cuss, The English Watch 1585 – 1970, 2009, pp 60-61, pl 23.In that example the movement is a later 18th century replacement, but otherwise the age,
design and decoration of that piece are very similar to the present example and may well be by the same maker.

Given the age and delicacy of the piece it is in remarkable condition. There are some minor losses to the enamels and the rock crystal case has had a couple of knocks where it has been called upon to protect the contents inside. The small delicate nature of this piece and its intricate decoration suggests, we believe, that it was made for a high status lady.

It would have been worn on a chain hung round the neck – see the picture in the Royal Collection of a young Lord Darnley (the father to be of James I) which shows him wearing a watch in this fashion (RCIN 403432). At this stage in the early development of watches, it would not have been particularly efficient. It would have needed to be wound twice a day; it would have maintained accuracy to within about ten minutes.

The maker David Bouquet I is noted in Brian Loomes, Clockmakers of Britain 1282 – 1700 Mayfield Books, Ashbourne, 2014 at p.63. By the beginning of the 17th century there were a number of foreign clock and watchmakers working just outside the control of the City of London, particularly in the area of Blackfriars, one of the so-called “liberties”. Many of these ‘strangers’ were Hugeunot refugees from France who were particularly skilled in the art of engraving, enamelling and lapidary work.

Their existance so near the City had a significant impact on the established clock and watchmaking trade. In 1622 a Petition was raised by a group of watchmakers in the Blacksmith’s Company and was sent to King James I in an attempt to prevent them trading and requesting the establishment of a Livery Company for the Clock and Watchmakers of London.

The first record of David Bouquet is in this Petition where he is referred to as ‘David Bowkett at Mr. Samsom’s house with two apprentices’ (presumably Sampson Shelton, a member of the Blacksmith’s Company) and living in Blackfriars.

Bouquet became a Freeman of the Blacksmith’s Company in June 1628, and subscribed an unspecified sum towards the incorporation of the Clockmaker’s Company in 1630 (as Mr Bucket) later being made a Free Brother of that Company in 1632 and in which he became Assistant from 1634 to his death in 1665. Bouquet was a prominent member of the Huguenot church and served as a warden at the French Church in Threadneedle Street for four periods of three years each between 1637 and 1662. He had three sons. David and Solomon, who both became watchmakers, and Hector who was apprenticed to the diamond cutter Isaac Merbert. Bouquet continued to run a prolific workshop in Blackfriars with
mumerous apprentices until his death.

Bouquet’s work, some signed ‘D. Bouquett, London’, ‘David Bouquet a Londres’, or ‘D. Bouquet A Londres’ was mainly watches, but lantern clocks by him are known. A tiny lantern clock in a silver case, now with verge pendulum, is in the Victoria and Albert Museum. There are notable watches by Bouquet in the British Museum, the British Royal Collection, the Rijksmuseum, Amsterdam, the Museo Poldi Pezzoli in Milan and the Walters Art Museum in Baltimore.

Given the age and delicacy of the piece it is in remarkable condition. There are some minor losses to the enamels and the rock crystal case has had a couple of knocks where it has been called upon to protect the contents inside. 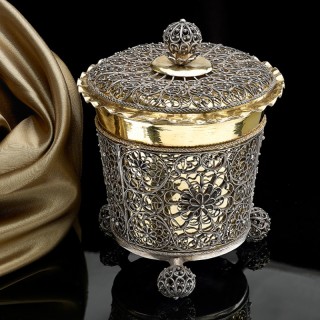