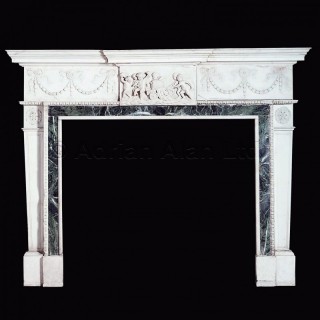 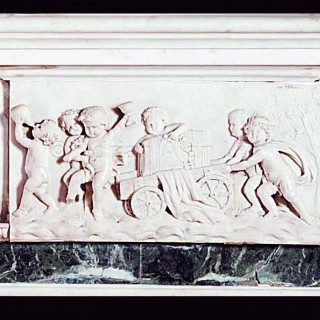 This elegant fireplace comprises many Neoclassical features, characteristic of the Georgian period. The tapered trapezoidal jambs stand on deep block feet with foliate column head motifs beneath a horizontal entablature. The simplicity of the vertical jambs is complemented by a band of egg and dart moulding and carved Corinthian leaf detailing around the fire aperture. The greater ornamentation, however, is reserved for the entablature. Here the breakfront frieze is carved with trailing ribbon tied bell-husk flowers and centred by a relief carved tablet. The tablet boasts a charming Bacchanalian scene of Putti, with their glasses charged and held aloft, negotiating with a cart and barrel. This fine fireplace gains an added touch of opulence from the inlaid Verde Antico marble, which frames the fire aperture and contributes to the overall grandeur of the piece.

This fireplace was formerly housed at Nuneham Park, Oxfordshire.

Nuneham Park, Oxfordshire was built to designs by Stiff Leadbetter during the late 1750’s for Simon 1st Earl Harcourt (1714-1777), who was a close confidante of George II and Governor to his grandson, the Prince of Wales, later George III. Between 1760 and 1764 further interior detailing was undertaken by James Stuart, including a chimneypiece for the dining room and the drawing room ceiling. During the latter part of the Eighteenth Century, alterations were carried out by Lancelot Brown in conjunction with Henry Holland for the 2nd Earl Harcourt. The house remained unaltered until the Nineteenth Century when Sir Robert Smirke carried out a series of improvements, including the addition of a South wing circa 1832.