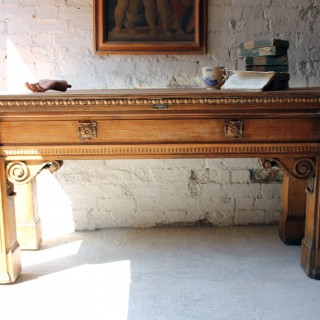 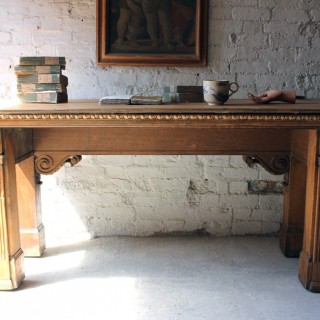 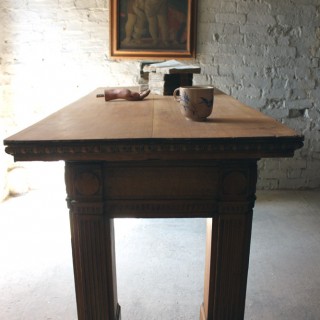 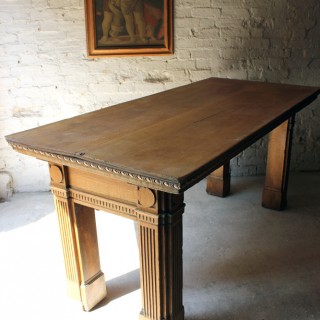 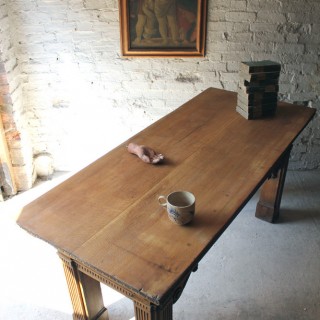 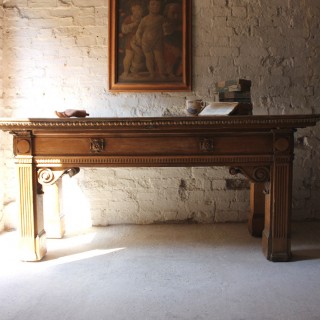 The large and heavily constructed architectural Victorian bleached oak table, in the Georgian revival style, having a boarded drop in top above a frieze with egg and dart frieze moulding to the surmount and a dentilled apron, the front frieze with dual carved square flower head medallion mounts, the square legs with fluted pilasters with wonderfully well carved scroll angle brackets and surmounted by roundels, the frieze bearing a presentation plaque stating `The Gift of Miss R.A.Clayton B.A. 1925′.

The table has mainly be left in as found condition but we have given some attention to her top, which was bowed so this has been rectified though there are still some signs of it not being completely true. There are markings to the top and the oak has plentiful character with imperfections to the surfaces but no sections of loss. The top is lift off and is thus removable. The plaque present on the table does provide more information than is generally the case for research purposes though the table certainly pre-dates the presentation date of 1925 and thus would not have been new at that stage. There are some mouldings absent to the tables upper frieze but they aren’t visible unless one inspects on hands and knees.

This impressive table was most likely specially commissioned. There may have been further matching furnishings and the details sharing some of the characteristics of the architectural features for where the items were intended to be placed. It has the appearance of a serving table, altar, or pier table, refectory, or even a console table, to be positioned against a wall or it may have even been once a stand, possibly for a cabinet surmount with plate glass to all sides of the top. However, it is more likely a counter table having been placed in a hotel lobby, country house or similar. There are two old hook fixings to the tops underside which one can see having been used for the hanging of papers as one stood on one side of the table. The fact that the egg and dart moulding is to all sides of the top and that the rear legs have the fluted pilaster detail would suggest that the item was intended to be placed away from the wall and thus visible on the reverse but this aspect lacks a frieze and scroll angle brackets. There would be ghosting and other marks from these former components if they have been subsequently removed. The table could be used as any of the above in today’s interior.

Remaining somewhat of a silent witness of its past this wonderfully over-engineered table is unashamedly masculine, undeniably fine and fantastically imposing.