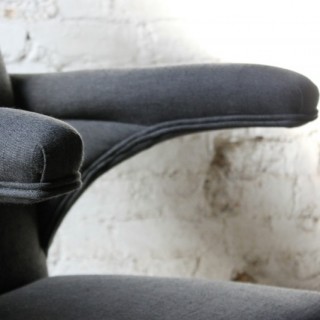 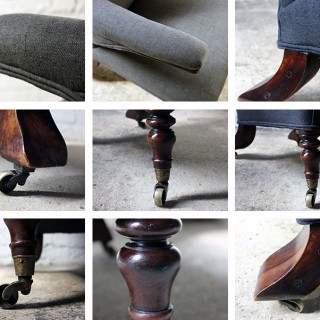 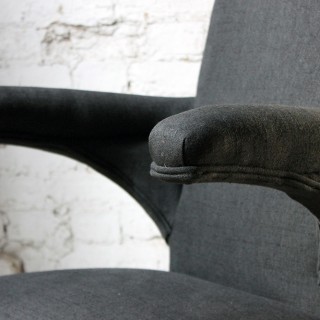 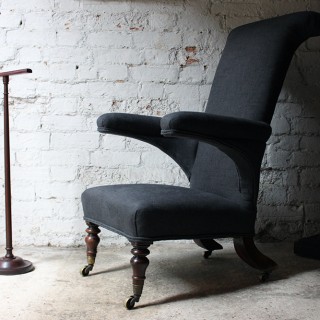 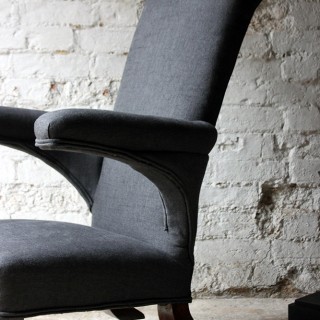 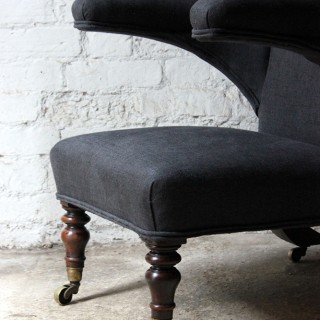 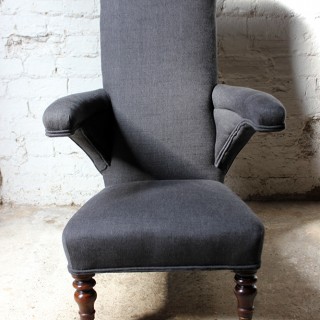 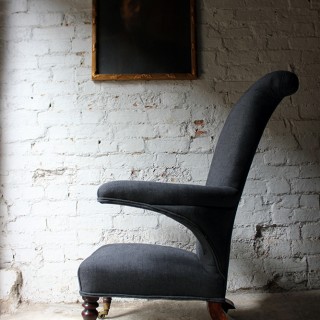 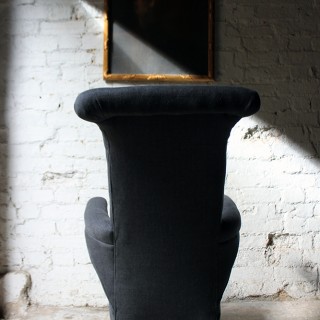 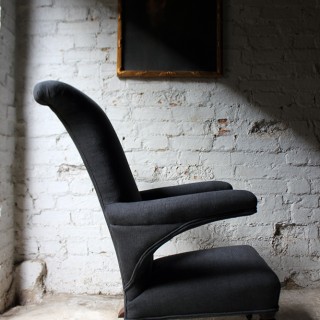 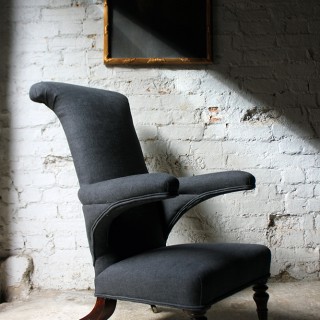 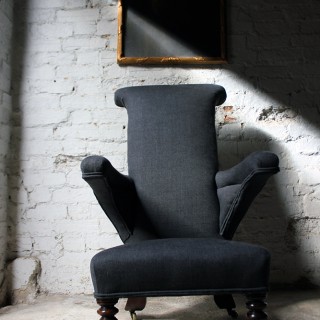 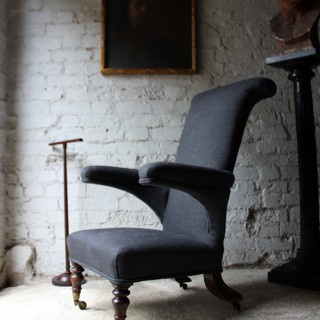 The good quality whole of unusual and sculptural form, of prie-dieu type, being upholstered in a charcoal tuscan linen with double piping, featuring an pair of under-swept arms to a high angular back with curved crestings, the padded seat to well circular turned walnut front legs to rear chunky sabres each with the original quality brass castors, having a paper label to the underside for ‘WM Bramston Esq’ and surviving from the late Regency to William IV period England.

When tightening and re-upholstering the chair there were some remnants of French period newspaper discovered to the innards though we don’t believe the chair is French, it may haven travelled there at a time. There were also some metal reinforcements to the frame, which both the French and the English used, employing bolts to fix arms and backs from the mid 18th-century onwards. This was continued by the best firms in the UK until the 1870 and then died out as a practice.

The charming hand written label to the underside (now covered but could easily be seen again) of the former owner ‘WM Bramston Esq.’ could well be for the Skreens estate in Roxwell, Essex. Thomas Bramston, Esq., built the house about 1710, but it and the grounds were greatly improved by his successor. Thomas William Bramston, Esq., M.P. He may have signed the chair WM Bramston to differentiate from his father before him as they were both Thomas’.

The frame has some similarities with that of prie-dieu chairs, though these never have arms, the back is similar being high and relatively upright. It may have been a prie-dieu for an infirmed gentleman, a certain Mr Bramston(?), who needed to rest his arms as he set about his devotional activities. The chair also has some similarities to a cock-fighting chair but the back isn’t quite narrow enough. The rear sabre legs are almost double the size you would expect and all of the castors are original. As such it is a mixture of different influences and proves unusual.

First used by the higher clergy during religious services in the early European Middle Ages, the prie-dieu became popular in the 19th century owing to the Gothic Revival and to a pietistic passion for family prayers. During this period their secular use was extended by the introduction of prie-dieu (or devotional) chairs, which followed the general shape of the purely religious version but extended the knee rest to form a low seat.

An intriguing, curious, beautifully sculptural and well-made chair, of which we don’t expect to see the like of again.

The chair is in very good condition both structurally and aesthetically, and there are no major flaws to report. The upholstery is fresh and contrasts well with the carcass lines and the walnut legs. The castors are original and are moving freely. The chair is more comfortable than it first appears and can be used regularly.