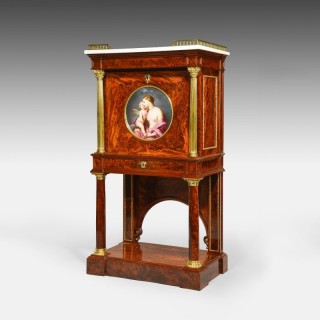 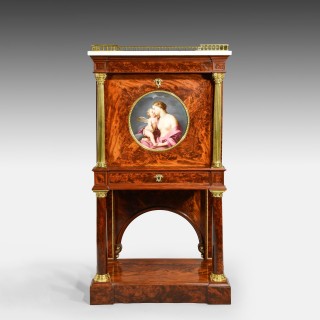 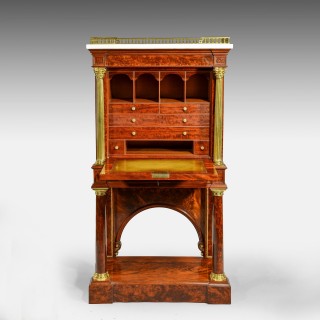 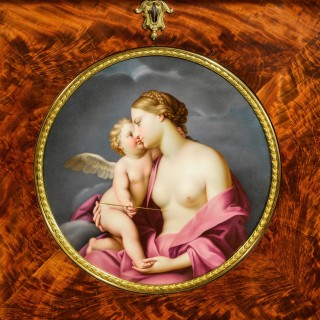 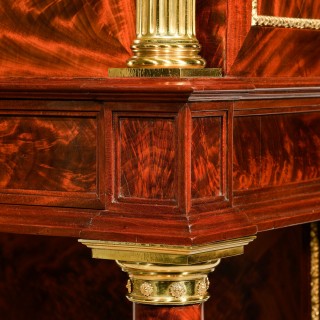 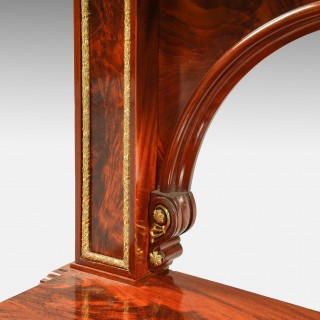 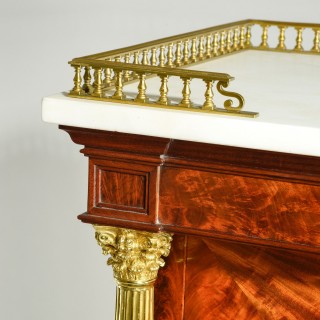 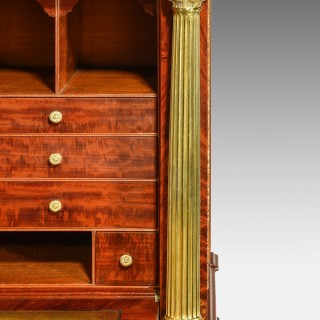 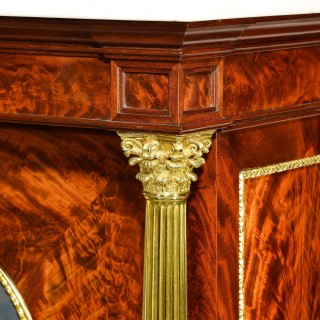 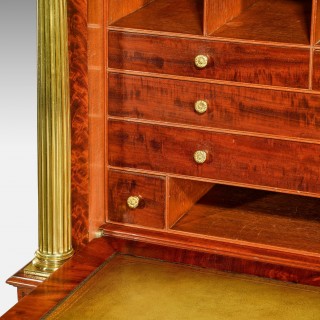 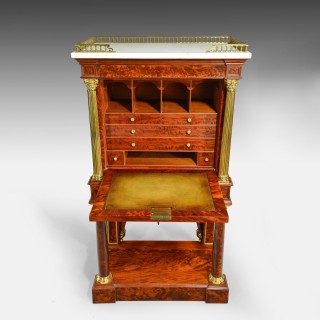 An Ormolu-Mounted Mahogany Secrétaire In the manner of S. Jamar

An Ormolu-Mounted Mahogany Secrétaire
In the manner of S. Jamar

Constructed from the finest flamed Cuban Mahogany and dressed with cast and fire-gilt bronze mounts, the fall-front secretaire posed on a rectangular plinth and supported on two columns with an open-arched backboard beneath a single lockable frieze drawer, the central door set with a central hand-painted porcelain plaque depicting Venus and Cupid within an ormolu border and flanked by fluted solid bronze Corinthian columns with acanthus leaf capitals; the hinged panel opening en abattant and incorporating a gilt-tooled leather writing surface as well as an arrangement of pigeon holes and six drawers with fine bronze rosette handles; the cabinet surmounted with a fine Carrara marble top finished with an ormolu three-quarter gallery. The plaque inscribed to the back “Copy from a Picture by Franceschini / in the Collection of Count Czernin in […]/ in Vienna Porcelain.”
English, Circa 1820

Of most innovative design, this English-made writing cabinet is inspired by contemporary Louis XVI and neoclassical pieces of furniture made at the end of the 18th-century in France. The motif of the architectural columns set on the corners derives from the work of Adam Weisweiler and Bernard Molitor, both of whom are represented in the English Royal Collection.

A few London cabinetmakers active during the first half of the 19th century could have been responsible for this cabinet combining the height of French design with the quality of English craftsmanship. However, it is the work of S. Jamar, based from Wardour St and Gerrard St in Soho, which comes closest to the present flamed mahogany secretaire.

In an advertisement dated 1818, Jamar claimed his furniture manufactured in London in the French taste was “equal to any made in Paris,” employing similar techniques and materials. He often combined striking flamed mahogany veneering with dazzling gilt bronze ornament. Several secretaires by Jamar incorporating Corinthian-style columns are documented.

The leading master of his time, Franceschini was an Italian painter and draughtsman. He painted altarpieces and cabinet pictures and was exceptionally skilled at large-scale fresco decoration, in which capacity he was widely active. He was the pupil of Carlo Cignani, himself the most distinguished pupil of Francesco Albani, and thus traced his artistic lineage directly back to Bolognese classicism. He interpreted the principles fundamental to this style with a rigour unequalled by any contemporary Italian master, being rivalled in this only by such French classicists as Eustache Le Sueur. Many artists were trained in his studio in Bologna and at his summer villa at Belpoggio. His closest follower was Giacinto Garofalini (1661-1723). Pupils of greater distinction included Giacomo Antonio Boni and Giuseppe Marchesi.

An Ormolu-Mounted Mahogany Secrétaire In the manner of S. Jamar