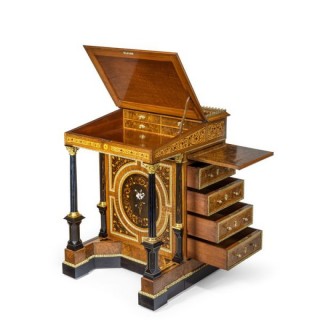 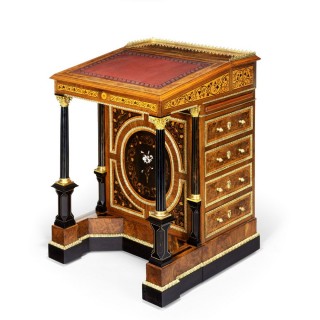 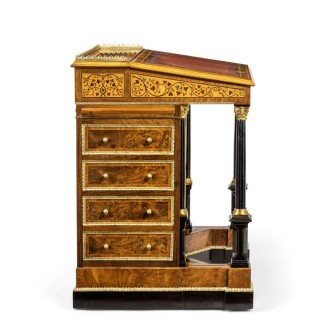 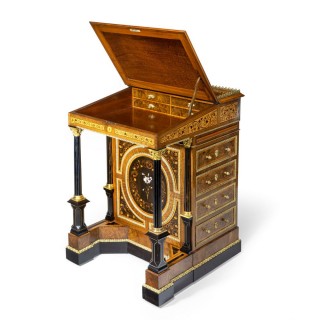 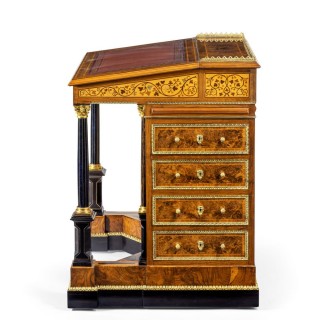 An outstanding high Victorian freestanding burr-walnut Davenport desk, attributed to Holland & Sons, of typical form with the hinged writing slope inset with the original Gothic tooled leather, enclosing four small drawers, all supported by four simulated lapis lazuli columns, the right side with four drawers and a book slide, with four corresponding dummy drawers on the other side, ornately decorated throughout with an ormolu gallery, corinthian capitals, classical borders and pomegranate handles, inlaid with a variety of coloured woods and bone with flowers and foliate arabesques, with hidden castors, the locks stamped ‘Chubb & Son, Makers to Her Majesty’ and individually numbered from 176130 to 176134.
English, circa 1870.

Footnote: Originally founded in 1803 by Stephen Taprell and William Holland, a relation of the architect Henry Holland, the firm of Holland & Sons became one of the most successful furniture making companies in the 19th Century. The firm worked extensively for the Royal Family, being granted the Royal Warrant by Queen Victoria, for the decoration and furnishing of Osborne House, Sandringham and Marlborough House. By 1859 they employed some of England’s leading designers and participated in all of the International Exhibitions from 1851 to 1878. Holland and Sons also executed over three hundred separate commissions for the British Government, including work at in the Palace of Westminster, the Victoria and Albert Museum.