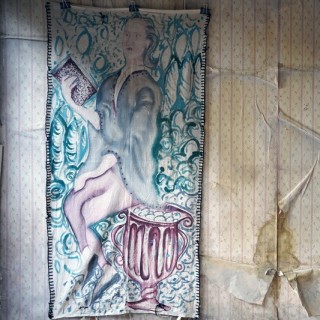 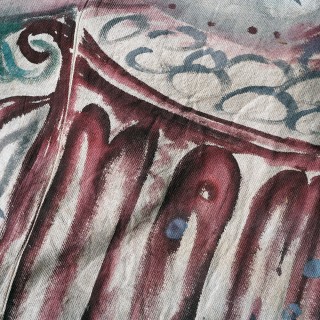 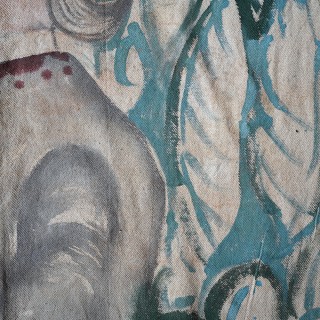 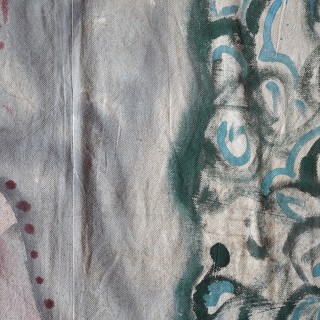 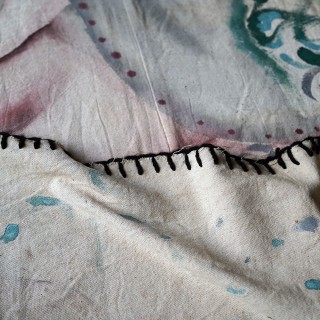 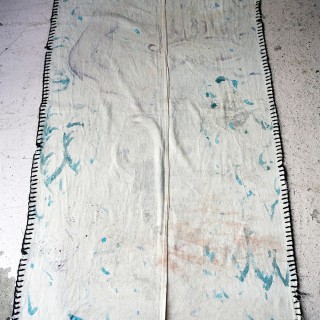 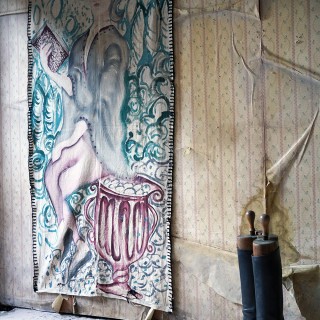 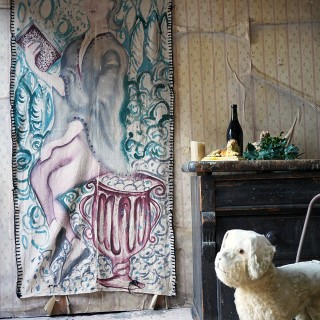 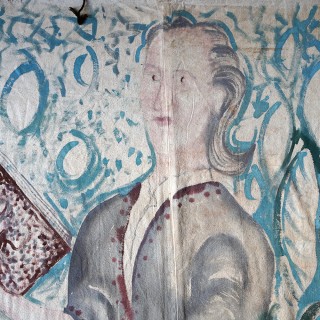 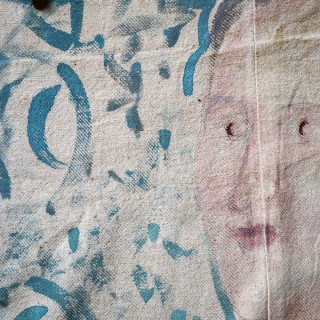 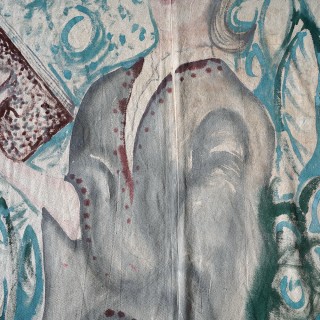 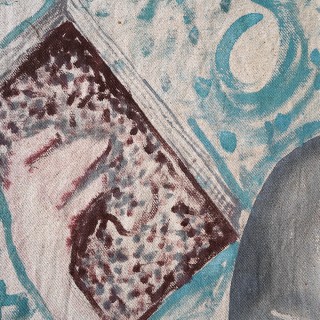 The large hand-painted theatre canvas backdrop, executed in a Bloomsbury Group-esque maximalist naïve style, upon thick cream cotton twill panels, depicting an androgenous figure holding a book, seated on a large garden urn, to highly stylised swirls and patterns to the background, using hues of blues, reds and blacks, the whole hemmed to upper and lower edges, sides hemmed in blanket stitch with black wool and surviving from the first quarter of twentieth century France.

In 1905 a group of writers, artists and intellectuals began to meet at the London home of the artist Vanessa Bell and her writer sister Virginia Woolf. They shared ideas, supported each other’s creative activities and formed close friendships. The group became known as the Bloomsbury Group and their meetings continued for the next thirty years and the style of this painting is very much of their stable. Pablo Picasso, Cezanne, the writer Jean Cocteau and the composer Eric Satie would have been prominent figures when this backdrop was painted and their influences can be seen clearly in its style and execution.

Beautifully hand crafted in the early twentieth century, this backdrop would have been used for a very specific production in a particular theatre. The major battle of romanticism in France was fought in the theatre. The early years of the century were marked by a revival of classicism and classical-inspired tragedies, often with themes of national sacrifice or patriotic heroism in keeping with the spirit of the Revolution, but the production of Victor Hugo’s Hernani in 1830 marked the triumph of the romantic movement on the stage. By the middle of the century, theatre began to reflect more and more a realistic tendency, associated with Naturalism. These tendencies can be seem in the theatrical melodramas of the period and, in an even more lurid and gruesome light, in the Grand Guignol at the end of the century. Also popular were the operettas, farces and comedies of Ludovic Halévy, Henri Meilhac, and, at the turn of the century, Georges Feydeau. Before the war, just before the time this backdrop was made, the most successful play was Octave Mirbeau’s great comedy Les affaires sont les affaires (Business is business) (1903). The poetry of Baudelaire and much of the literature in the latter half of the century (or “fin de siècle”) were often characterised as “decadent” for their lurid content or moral vision.

A unique and joyful which was incredibly ahead of its time, it could almost have been painted yesterday. Marvellous.

The painted canvas is in good overall condition, with a few creases here which could be dropped out over time and very minor scuffs to the paintwork. The twill panel is in two widths joined in the centre.