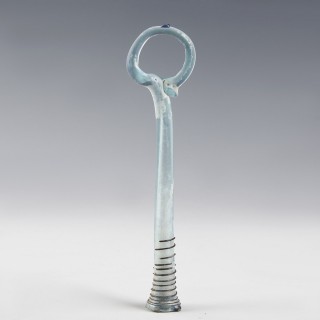 An elegant and finely modelled Ancient Roman perfume applicator made from vibrant light turquoise glass, featuring a flaring, hollow body which is coiled at one end to form a looped handle. The flared end is further enriched by an additional applied thread trailing in a dark brown glass. Some silvery and mother of pearl like iridescence to the body. An extremely beautiful and rare piece.

This charming piece would have once been used to apply perfume from an unguentarium. Unguentaria were small perfume or cosmetics bottles made of blown glass. They were extremely popular throughout the Roman Empire, since they contained perfume and oil, considered precious at the time. Ancient Romans loved wearing perfumes, which were used in beauty products, public bath and in religious ceremonies. Roman perfume-making process is well documented: a mural scene in Pompeii displays the process of making and trading Roman perfumes. In Classical Times the abundance of olive oil made it the most popular oil used in the perfume manufactory, always combined with plant-based ingredients such as flowers, leaves, seeds, woods and resins.

The finesse and delicacy of this artefact may suggest that the original owner could have been a woman from Roman high society.

Very fine, some encrustations and some beautiful iridescence on the surface. Some part of the applied dark blue trail missing.