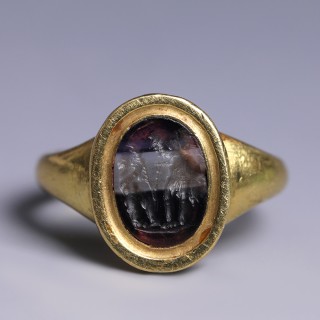 A fine ancient Roman gold ring comprising of a round section hoop with expanding shoulders and an oval bezel marked by an internal groove. The ring is enriched by an amethyst which displays a deep purple colour and a wide, horizontal white band. The stone is finely carved with the image of two male figures. To the right, an old man is depicted with his back hunched, holding onto a cane and possibly carrying an object onto his shoulders. In front of him stands a naked young boy who carries a tall palm frond. In Roman mythology, the palm branch was a symbol of eternity and triumph, seen as a favourable omen linked to the legends of the origins of Rome. This allows to identify the two figures as Romulus, the mythological founder of Rome, and Faustulus, the shepherd who found him and his twin brother Remus along the banks of the Tiber River, as the infants were being nursed by the she-wolf.

Very fine condition. Some signs of ageing on the gold behind the bezel.