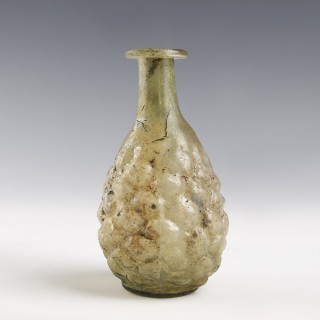 An Ancient Roman pale green glass grape flask of a very large size. The vessel features a long neck with rounded, flattened rim and an oval body. The relief decoration on the body consists of small, tightly-packed knobs, which were likely designed to imitate a bunch of grapes. Some light mother of pearl like iridescence and earthly encrustation are visible to the surface. A rare piece considering its size and condition.

During the Roman Empire glass was often the preferred material for storing expensive oils, perfumes, and medicines because it was not porous. The small body and mouth allowed the user carefully to pour and control the amount of liquid dispensed. By the 1st century AD, the technique of glass-blowing had revolutionised the art of glass-making, allowing for the production of small medicine, incense, and perfume containers in new forms. These small glass bottles are found frequently at Hellenistic and Roman sites, especially in cemeteries, and the liquids which filled them would have been gathered from all corners of the expansive Roman Empire.