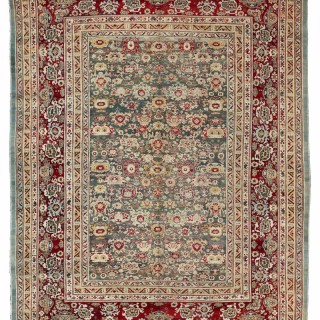 Woven in the late 19th century this exquisite Agra has rich burgundy dyes in the border balanced beautifully with the subtle green main field colour.  The pale blues and gentle yellow dyes used for the minor borders and floral palmettes and harshang designs are just delightful.  A deep pile completes the rarity and quality of this antique Agra.  Exceptional condition with little wear, Agra carpets are known for their durability and excellent construction.  This piece is quite remarkable and ideal for any room.  It could look magnificent in a study, hall, drawing room or dining room.

The Indian city of Agra in the late 19th century was an area where carpet weaving began to excel, as carpets and rugs were comissioned for the western market. Persian designs were used, but like Ziegler carpets the designs were generally enlarged to show beautiful palmettes and vines with mainly reds, purples, greens and ivory as the predominant colours.  From the 16th century, during the Mughal Empire carpet weaving was influenced by the Persian weavers which resided in Agra, India.  Designs on Agra carpets vary considerably, but Persian floral motifs from Tabriz and Ziegler were often used.  The British revival in the 19th century bought back the production of oriental rugs after the collapse of the Mughal Empire due to high demand for export.

We offer the service of viewing any of our carpets & rugs in-situ in London, Surrey, Hampshire & the UK by appointment.  We also will ship worldwide and have sent carpets as far as Hong Kong safely and securely.

With a wonderful rich deep pile, in excellent condition.