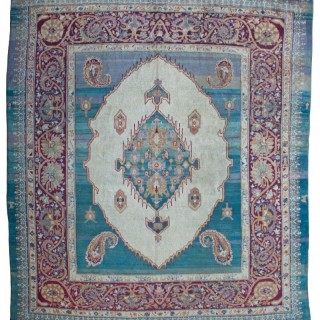 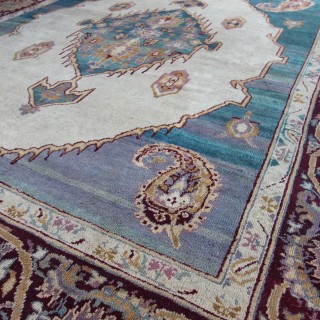 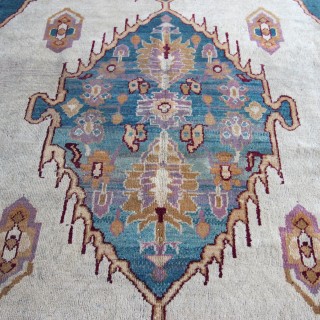 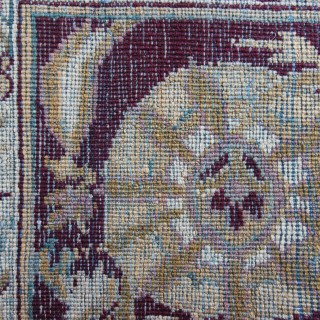 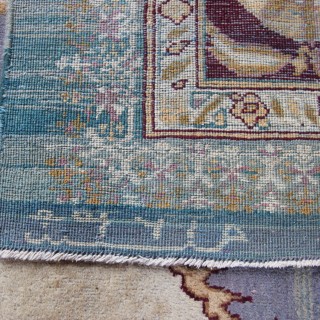 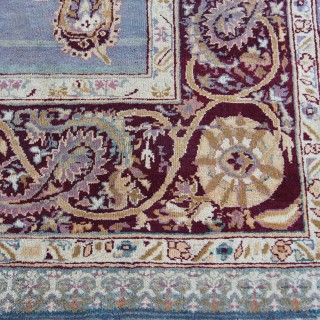 A simply stunning and extremely rare antique Agra carpet of square proportions woven in India, the city famous for the Taj Mahal. Beautiful natural dyes on this carpet with soft purples blues, greens and rich burgundy dyes. Each corner has been signed by the weavers, also there are some charming animal motifs in the outer border. This carpet is also very rare as it has the date woven into each of the four corners of the carpet, woven in the Persian Calendar it reads 1246 which translates to 1867 in the gregorian calendar.

The Indian city of Agra in the late 19th century was an area where carpet weaving began to excel, as carpets and rugs were commissioned for the western market. Persian designs were used, but like Ziegler carpets the designs were generally enlarged to show beautiful palmettes and vines with mainly reds, purples, greens and ivory as the predominant colors. From the 16th century, during the Mughal Empire carpet weaving was influenced by the Persian weavers which resided in Agra, India. Designs on Agra carpets vary considerably, but Persian floral motifs from Tabriz and Ziegler were often used. The British revival in the 19th century bought back the production of oriental rugs after the collapse of the Mughal Empire due to high demand for export.

We offer the service of viewing any of our carpets and rugs in-situ in London, Surrey, Hampshire and anywhere else in the UK by appointment.

Very good indeed, the main field of the carpet has a medium pile with only minimal areas of wear. The colours are very good and the woven date in each for corners is very clear. A remarkable early carpet with beautiful colours and dye change.