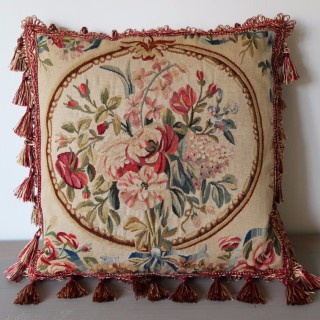 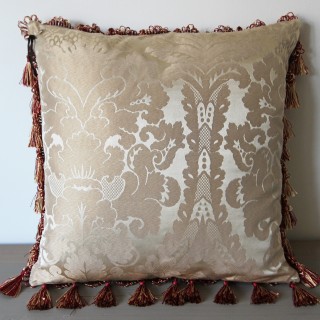 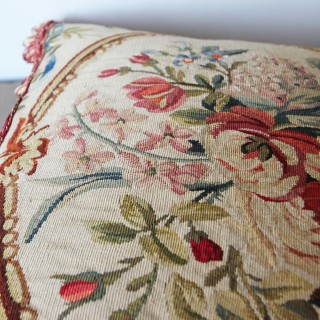 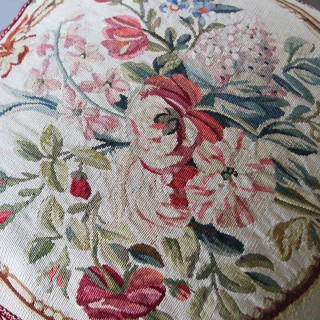 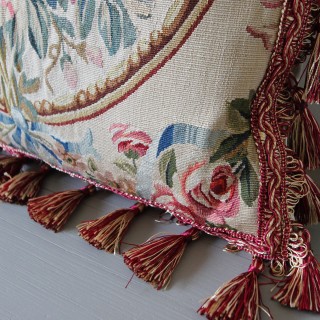 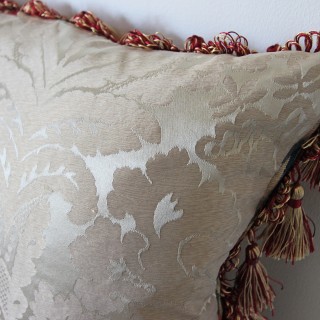 Purchase this gorgeous Antique Aubusson cushion from our website and we shall ship it securely to your home. All handmade beautifully with a delicate silk backing and wonderful detailing around the edges and filled with a feather insert.  The Aubusson faces of these cushions are original French tapestries from the late 19th century, they date from around 1870-1880 and have been conserved where necessary and then made into these elegant decorative antique cushions.  The workmanship is exceptional and we try to have these created in pairs, Ref: 8960 is part of the same original Aubusson tapestry so they work together very well. There are a couple of images of the two cushions together in additional images as well.

We have a good selection of antique Beauvais tapestry cushions, antique Aubusson cushions as well as contemporary pillow cushions from Suzani design cushions and Ikat cushions which are silk and wool all hand-produced in Turkey.  Purchase any of our cushions online and we will securely wrap and ship them to your home or office.

The Aubusson manufacture of the 17th and 18th centuries managed to compete with the royal manufacture of Gobelins Tapestry and the privileged position of Beauvais tapestry.  Aubusson carpets were produced in the upper valley of the Creuse in central France, possibly developed from looms in family workshops established by Flemings that are noted in documents from the 16th century.

Typically, Aubusson tapestries depended on engravings as a design source or the full-scale cartoons from which the low-warp tapestry-weavers worked. As with Flemish and Parisian tapestries of the same time, figures were set against a conventional background of verdure, stylized foliage and vignettes of plants on which birds perch and from which issue glimpses of towers and towns.