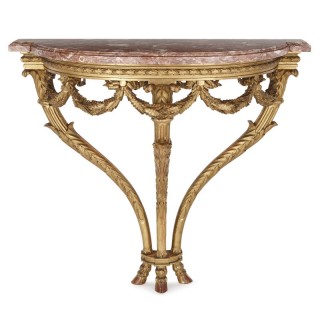 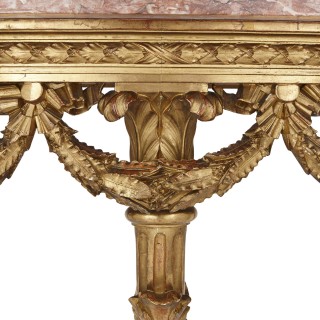 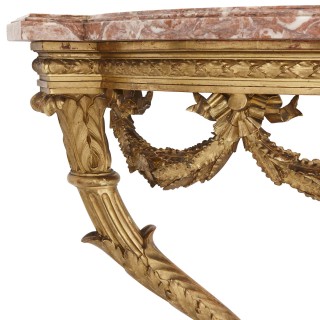 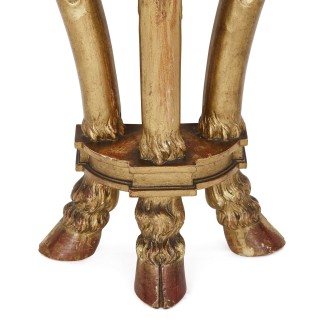 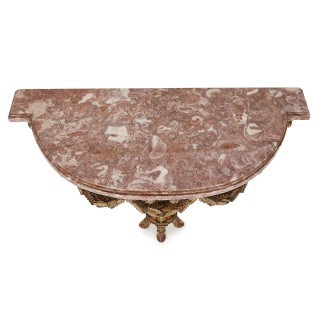 Arguably the greatest craftsman of the 19th and early 20th Century, French cabinetmaker, François Linke, is responsible for the design of this stunning console table. In his lifetime, Linke supplied works to an elite international clientele, and won multiple awards at International Exhibitions. Indeed, Linke’s furniture on show at the 1900 Paris Exposition Universelle was described in one review as ‘magnificent’ and displaying the ‘wonderful talent’ of the craftsman.

The table is composed of a veined pink marble top, raised up on three, curved giltwood legs. Its back is flat, allowing for it to be placed against a wall in a hallway, or in some other space-restricted room. The marble top covers a giltwood frieze, which is decorated with foliate carvings, and draped with sculptural foliage swags. The three legs that support the frieze have foliate capitals and fluted bodies, which are wrapped in large leafy forms. The legs terminate in hoof feet, which are linked by a stretcher. The table is signed, ‘F. Linke A Paris’.