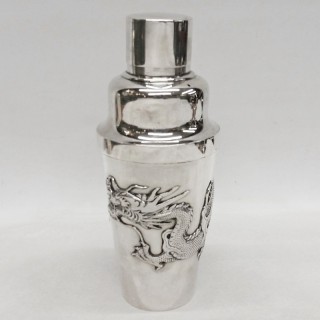 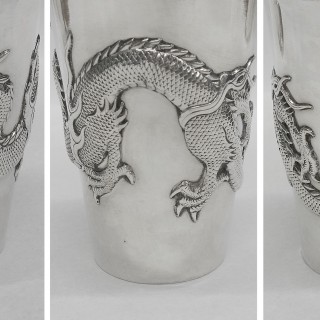 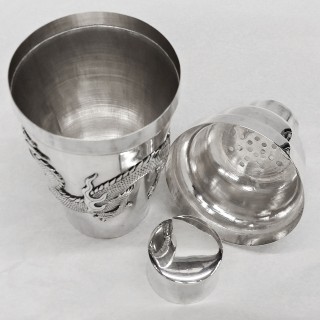 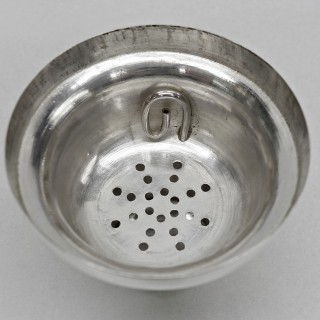 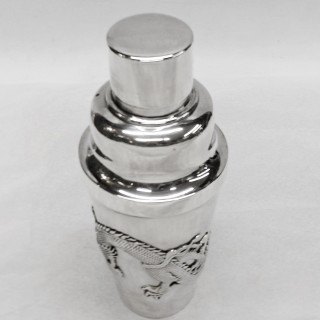 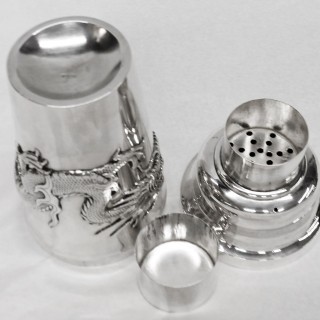 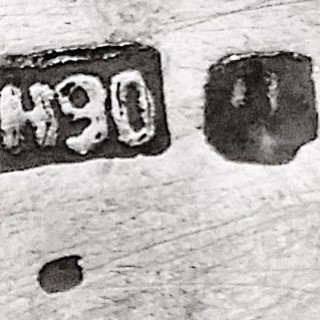 A large size antique sterling silver cocktail shaker with a hammered finish. An applied decoration of a dragon, blowing fire from his mouth, curls all the way round the shaker. The large top comes off to fill the ingredients and the little top cup comes off for pouring and also serves as a drinks measure. Weight 476 grams, 30.5 troy ounces. Height 22 cm. Stamped underneath with Chinese silver marks. Maker Wang Hing. Circa 1900.

Biography – Wang Hing & Co, circa 1854-1941, was a prolific producer of Chinese Export Silverware. The company was also one of the first to establish a large retail emporium that grew to sell a wide variety of luxury goods.

Wang Hing & Co begun just after the 1842 Treaty of Nanking by the Lo Family who lived in Xiguan with Shameen Island in Canton where the 13 Hongs had been situated. In the late 1860’s, the eldest son Lo Kit Ping took the helm. It wasn’t until the early 1920’s that a purpose-built flagship store was decided to be built on the Queen’s Road, Hong Kong. This store was run by Lo Hung Tong.

The Lo family members insisted on designing and overseeing the quality of every item of silver that was made for them and it was from their Hong Kong emporium they fast established the reputation as the place to go to order bespoke trophies and commemorative items that became part of the thriving men’s clubs and sporting clubs that became synonymous with Hong Kong.

This useful cocktail mixer is in very good condition with no damage or restoration. The decoration has good definition. Marked underneath with Chinese silver stamps.
Please note that this item is not new and will show moderate signs of wear commensurate with age. Reflections in the photograph may detract from the true representation of this item.