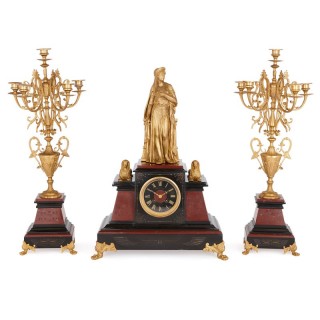 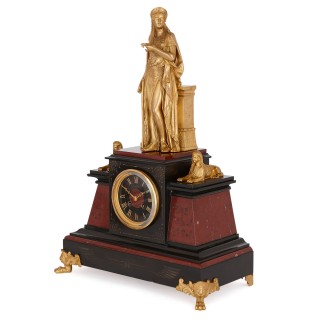 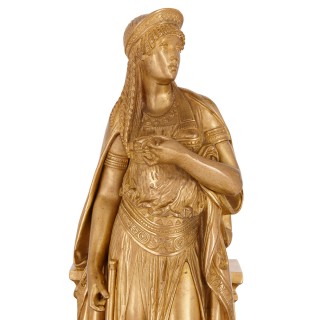 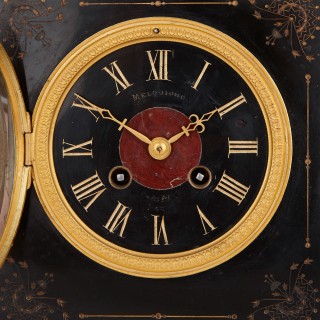 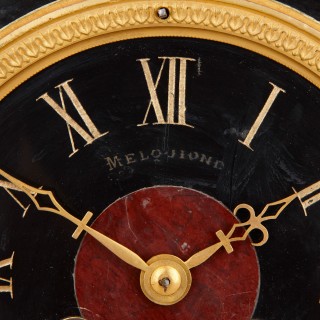 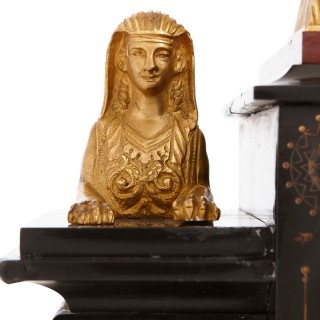 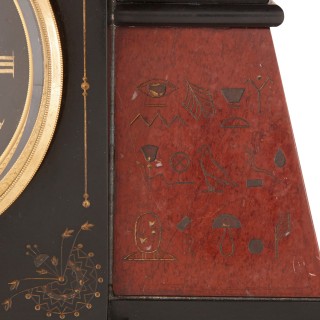 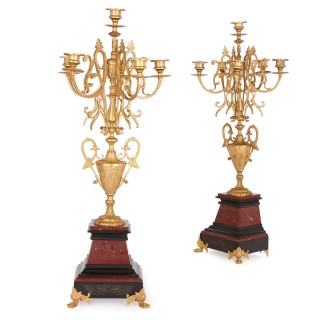 This clock set is designed in the Egyptian Revival style, which was in vogue in Europe and America in the 19th Century. The fashion was kick-started by Emperor Napoleon I’s campaign in Egypt in 1798-9. This led to the publication of ‘Le Description de l’Égypte’ (The Description of Egypt) in 1809 (and a second edition in 1830), which documented various aspects of Egyptian culture, including the pyramids, antiquities, ancient and modern buildings, Egyptian clothing, and so on. The translation of the hieroglyphs on the Rosetta Stone was published in 1822. These new releases encouraged the fashion for Egyptian motifs in decorative art, furniture, and architecture.

The clock set is comprised of a mantel clock and a pair of flanking candelabra. The mantel clock is of pyramidal form, with a gilt bronze (ormolu) sculpture of an Egyptian woman at its apex. The woman stands on a cuboid clock case and is accompanied, on the shoulders of the clock body, by two gilt bronze sphinxes. At the centre of the black marble clock case, there is a circular dial with gilt Roman Numerals and the manufacturer’s name, ‘MELQUIOND PARIS’. This is set within a circular gilt bronze bezel. Gilt bands and foliate motifs decorate the black marble case around the bezel. The pyramidal body of the clock is crafted from red marble, and decorated with black hieroglyphs. It is placed on a rectangular black marble base, with a winged sun motif on its front. This is set on four gilt bronze paw feet.

Each candelabrum features six gilt bronze branches, five of which are scrolling, and one central. These support beaded drip-pans and urn-shaped capitals. The branches are supported on stems, which issue from the mouths of gilt bronze twin-handled vases. The vases stand on pyramidal red marble plinths, decorated with black hieroglyphs and banded with black marble. The plinths stand on square black marble bases, which are decorated with winged suns, and set on four gilt bronze paw feet.