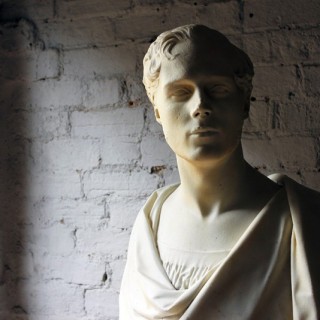 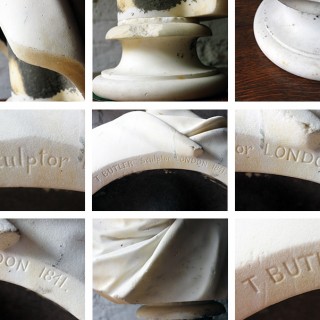 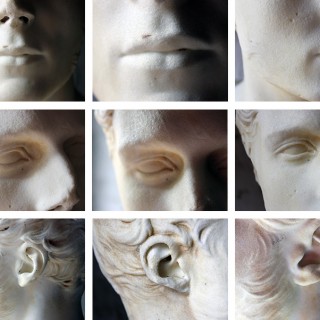 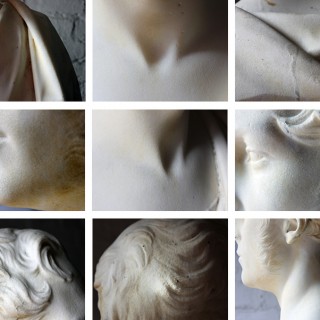 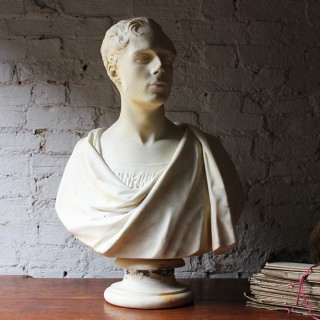 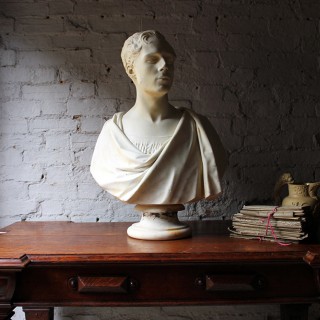 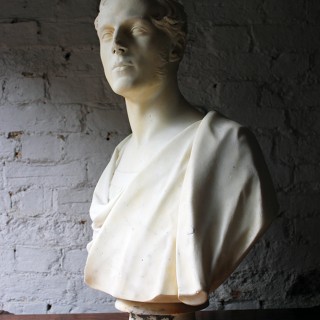 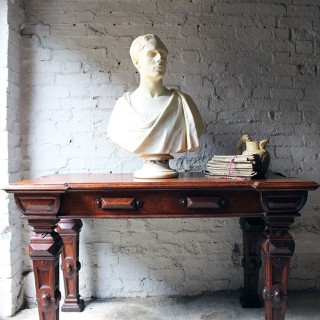 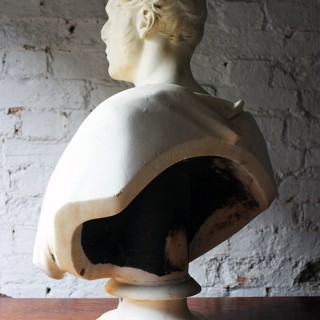 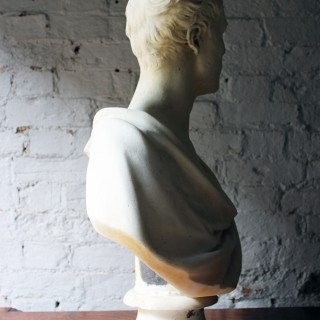 The bust has some weathering to it with some staining and overall wear as per the photographs that one would come to expect. The whole is in pretty good overall condition; there is loss to the nose of the bust, the weathered finish having at some point been partially cleaned whilst there are some small losses to the socle base and chips to the figure. It is naturally very heavy so would need a suitable resting spot.

The quality of the work is superb from the movement found in the drapery to the subtlety to the nape, all work of a great hand. The hand is that of Timothy Butler who was christened on 24 October 1806 at Camersham, Oxon, the son of Timothy Butler and his wife Sarah. Nothing is known of his early life but he trained as a sculptor in the studio of William Behnes at 91 Dean Street, Soho. In 1824 he won a large silver medal from the Society of Arts for a plaster model after the antique and in November 1825 entered the Royal Academy Schools, where he was awarded a silver medal in 1827. He exhibited at the RA between 1828 and 1879, showing about 100 portrait busts. He appears to have established his own studio by 1835, when his address was 30 Gower Place. He moved to 1 Middlesex Place in 1845 and then to 270 Marylebone Road in 1858.

Butler was a popular portrait-sculptor and his busts seem to have been excellent likenesses. In 1842 he executed one of Sir James Eyre which the Art Union considered ‘a work which would do honour to the greatest of our sculptors’. The outspoken art critic F T Palgrave was an admirer of the sculptor’s work. He described the bust of Professor Narrien as ‘in the grand and thoroughly sculpturesque manner of Mr. Behnes’ and noted that, like other works by the artist it was ‘careful and conscientious in every detail’ and appeared ‘to convey a genuine likeness’. A number of Butler’s busts were posthumous portraits including that of the infant Charles William O’Malley. He executed statues of the Earl of Leicester for Dereham town hall, and Richard Cobden for Bradford wool exchange. Butler also undertook decorative work, designing lamp standards which were set up on the Thames Embankment ‘at the landing place between Waterloo and Hungerford Bridge’ in 1870 and lions’ heads for ‘the pedestals both on the north and south side of the river’. The lamps featuring figures of boys climbing the shaft of the lamp to light the globe at the top, were intended to represent ‘the energetic spirit which characterises the British nation’.

The census records show that by 1881 Butler was a widower, living at 186 Euston Road with a daughter, who was a sculptress, and a son who was an artist. John Adams-Acton, a successful portrait sculptor of the later 19th century, trained in Butler’s studio.

In the year of 1841 we know that Butler created three portrait busts; that of Dr Elliotson FRS, George, 6th Earl of Granard and John William Buckle, so this could well be assumed to be of one of those three figures. From these we believe that it most likely of Dr John Elliotson, , professor of the principles and practice of medicine at University College London (1832), and senior physician to University College Hospital (1834).

The bust has some weathering to it with some staining and overall wear as per the photographs that one would come to expect. The whole is in pretty good overall condition; there is loss to the nose of the bust, the weathered finish having at some point b