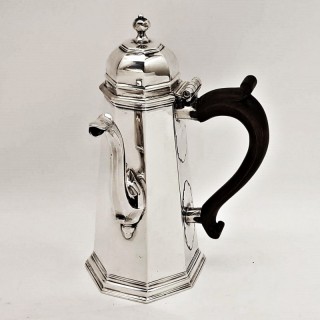 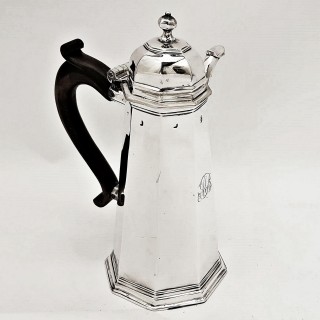 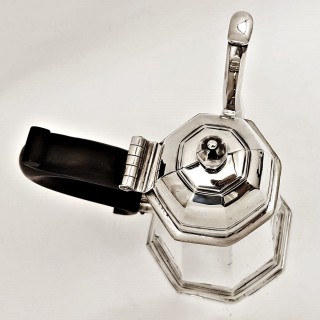 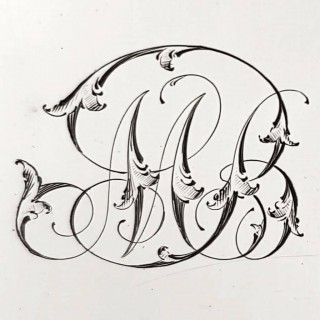 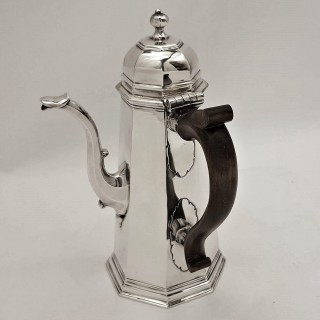 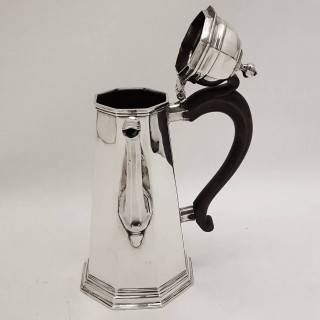 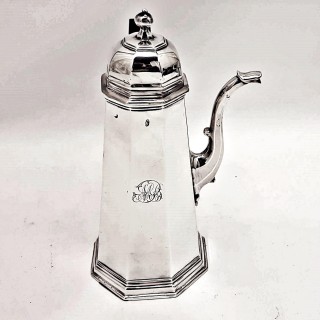 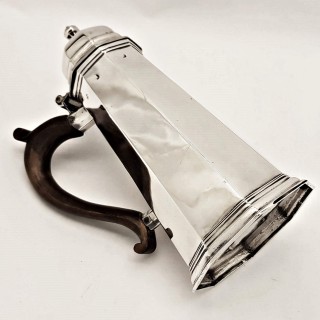 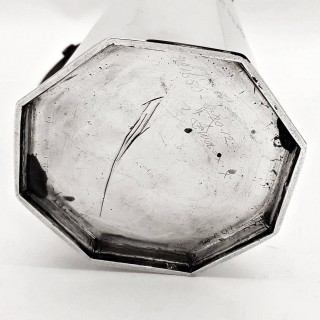 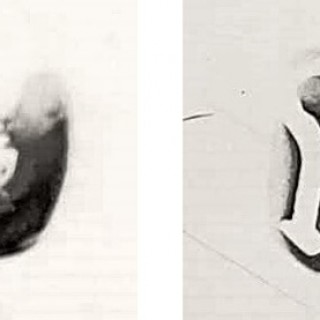 An early antique silver coffee pot (or chocolate pot) with domed lid and wooden side handle. Dates from the first year of George I’s reign. Britannia standard* silver. Elegant plain style with simple reed borders and the straight lined octagonal shape is a very rare and desirable feature. The decorative strapwork handle supports are also functional as Britannia standard silver is purer and therefore a softer silver. To the front is a stylised monogram in old fashioned script (later engraved).
Weight 669 grams, 21.5 troy ounces.
Height 24.5 cm. Spread 14 cm.
London 1715.
Maker indistinct.
*Britannia Standard. In 1696, so extensive had become the melting and clipping of coinage that the silversmiths were forbidden to use the sterling standard for their wares, but had to use a new higher standard, 95.8 per cent. New hallmarks were ordered, “the figure of a woman commonly called Britannia” and the lion’s head erased (torn off at the neck) replacing the lion passant and the leopard’s head crowned. This continued until the old standard of 92.5 per cent was restored in 1720. Britannia standard silver still continues to be produced even today.

Coffee and chocolate were brought to England in the mid 17th century and were established as part of social life by the end of the century. Coffee pots can be found from the 1680’s onwards. Initially, these tall form pots were used for both coffee and chocolate however we now term chocolate pots to be those with either a removable finial or removable lid for inserting a swizzle stick. We also nominate some early side handled pots as chocolate pots.

The silver pot is in good condition. Stamped with a full set of English silver hallmarks on the body (the date mark is clear, the remaining marks are rubbed), the lid rim has the Britannia mark. Bright finish. The octagonal sides are good at the edges. There are a few minor bruises and scratching from use over the years.
Please note that this item is not new and will show moderate signs of wear commensurate with age. Reflections in the photograph may detract from the true representation of this item.