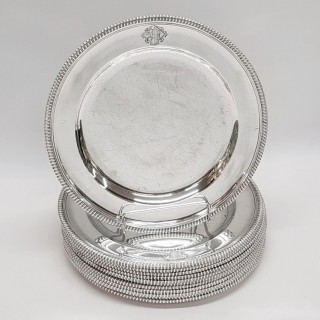 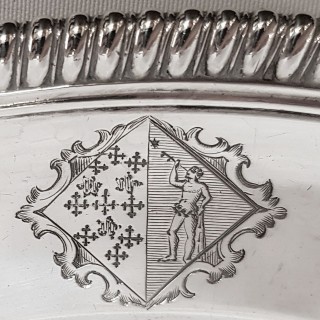 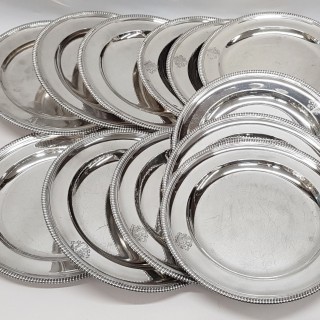 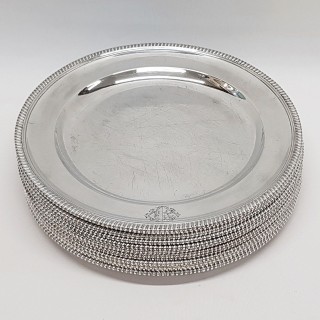 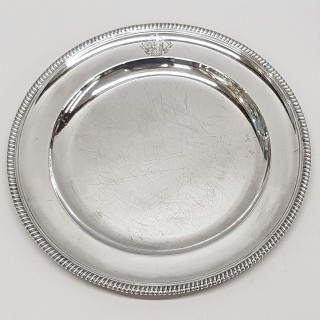 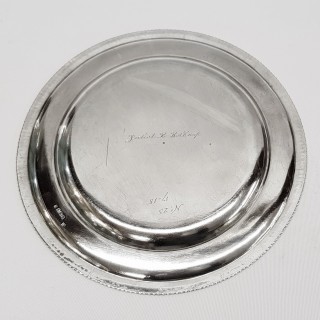 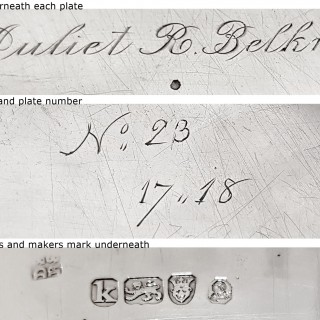 A handsome set of 12 antique sterling silver plates with plain styling and gadroon borders. Hand engraved to each top rim there is a armorial within a lozenge shaped cartouche. Excellent quality. They are numbered on the underside (originally a very large set) and also have the owners name Juliet R Belknap and the scratchweight. Total weight 6652 grams, 213 troy ounces. Diameter 24.7 cms. London 1785. Maker Smith & Sharp.

Biography – Daniel Smith and Robert Sharp, a London silversmith partnership 1763-1788. A curious characteristic of the marks of Smith and Sharp after the Carter partnership was over, and of Sharp alone in 1788, is that each shows, at the top edge of the punch, traces of the bottom of the initials of the former partner, apparently intentionally.

Robert Sharp, originally of Newcastle on Tyne, apprenticed to Gawen Nash 1747 and turned over the same day to Thomas Gladwin Citizen and Merchant Taylor, free 1757. First mark in partnership with Daniel Smith 1763. Supplier to Parker and Wakelin. His nephew Robert Sharp was apprenticed to his uncle 1771. Second mark as plateworker, in parnership with Richard Carter and Daniel Smith 1778. Third, fourth and fifth marks, in partnership with Smith only again, 1780. This last mark has been ascribed previously to Robert Salmon, spoonmaker.

This large set of silver plates are in very good condition with no damage or restoration. Each stamped on the reverse with a full and matching set of English silver hallmarks. The engraving is crisp. There is some light scratching and wear from use and this has not been polished away.
Please note that this item is not new and will show moderate signs of wear commensurate with age. Reflections in the photograph may detract from the true representation of this item.