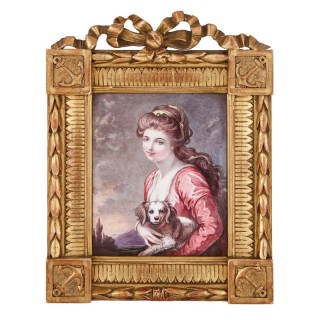 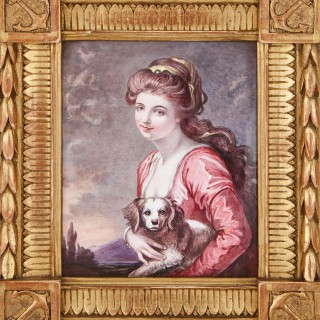 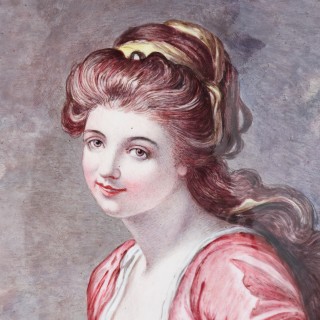 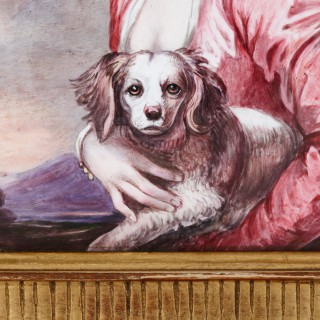 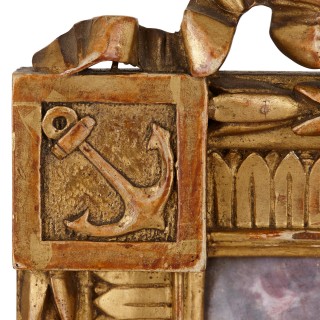 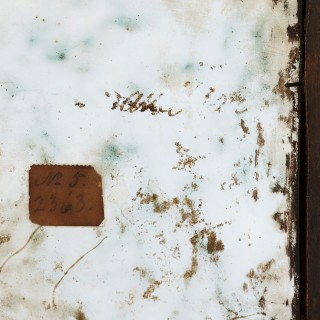 The beautiful enamel plaque was crafted in Limoges, a town in northern France. Limoges has long been associated with the production of high quality enamel wares. While to begin with, in the 12th Century, the town was famous for its applied enamel pieces — religious icons, for example, which were crafted in metal with champlevé enamel ornament — Limoges later, in the 15th Century, began to paint onto enamel, creating plaques, plates and ewers, which were both religious and secular in character. These local techniques were revived in the mid-19th Century, when items like this enamel portrait painting were produced.

This enamel portrait is a half-length depiction of a young woman. While her body is faced slightly to the side, she turns her head to look out directly at the viewer. The woman wears a fine, light pink gown, identifying her as a member of the social elite. Her long hair is partly tied up with a ribbon, while the rest falls down her back. A small brown and white spaniel sits on her lap, and also looks out at the beholder. In the left-hand background, there is a cluster of trees, standing before hills. While the sky behind the woman is cloudy, it appears to clear to the left of the composition. It is possible this portrait was intended for a potential suitor, or for the sitter’s family, and was commissioned to record the woman at her prime, as a youthful beauty.

The back of the enamel panel is indistinctly signed.