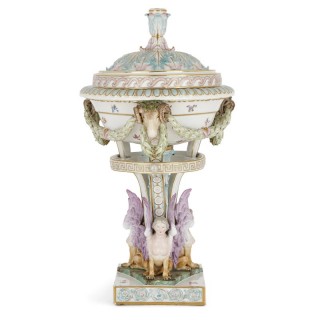 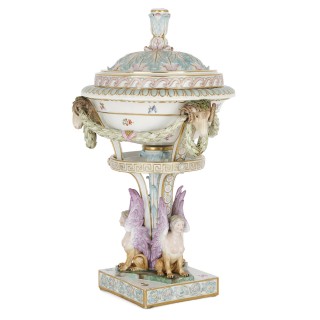 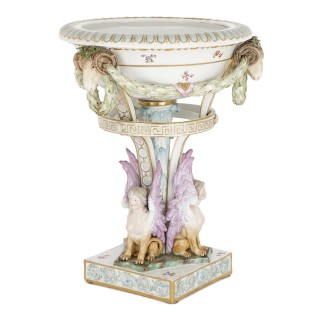 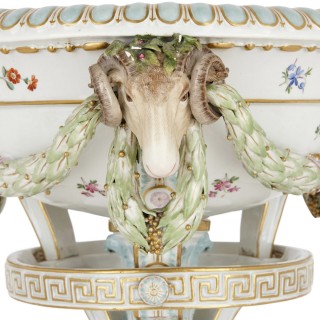 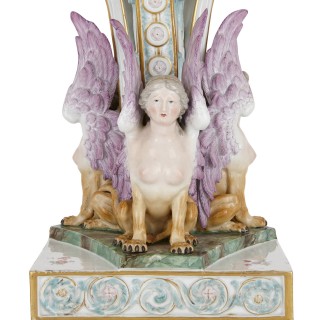 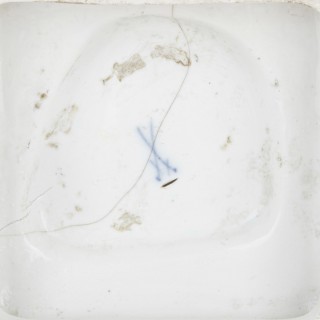 This beautiful vase was created by the world-famous Meissen porcelain factory. Meissen was established in the early 18th Century, making it the first producer of hard-paste porcelain in Europe. The company was hugely successful, and enjoyed the patronage of European royalty and nobility. This vase bears the blue-painted crossed sabres mark of the Meissen factory.

The white porcelain vase features a shallow bowl, which is covered by a domed lid with a candlestick finial. The lid and finial are decorated with raised, parcel gilt light pink and blue leaves. The bowl is parcel gilt and ornamented with a light blue egg-and-dart pattern and colourful flowers. Naturalistic, modelled rams’ heads are mounted onto the vase’s bowl, and green swags are draped between them. The vase’s bowl is supported on four legs, centred on a stem covered with parcel gilt light blue foliage. The legs are edged with parcel gilt light blue paterae (medallion motifs) and they are linked by a circular band, decorated with blue rosettes and a gilt Greek key pattern. Pink-winged sphinxes sit at the legs’ feet. The vase is set on a square base which is decorated with colourful flowers, light blue scrollwork and gilding.