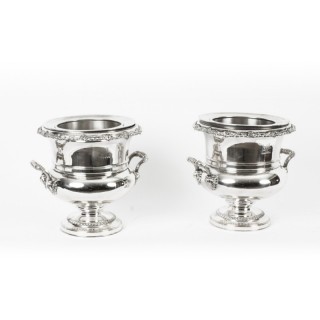 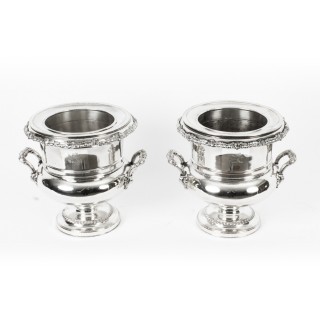 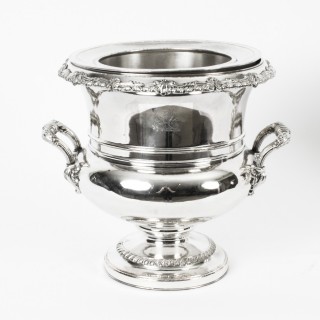 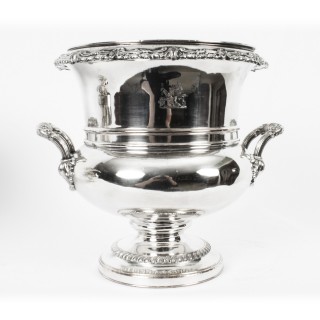 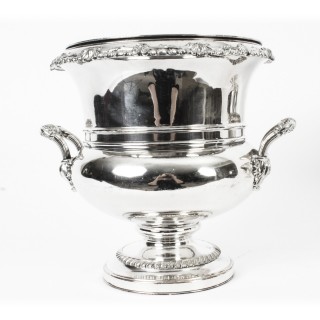 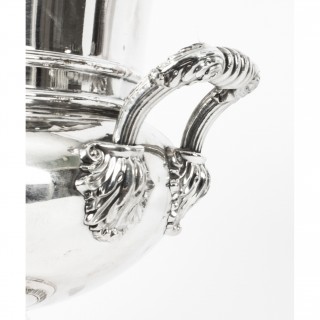 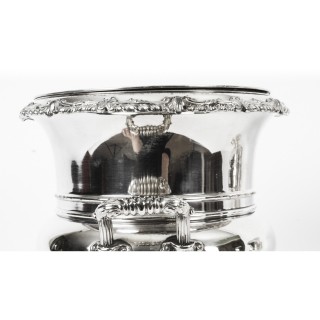 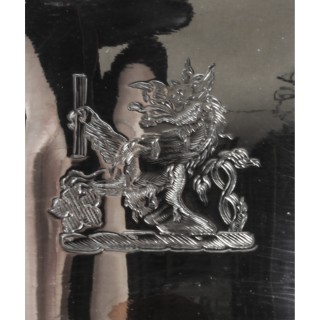 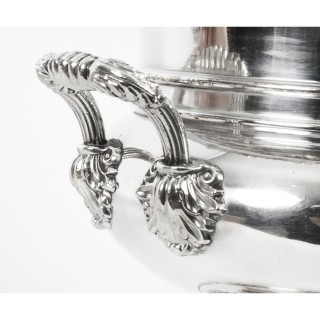 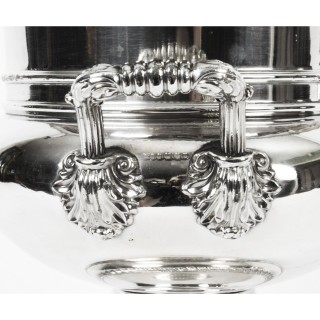 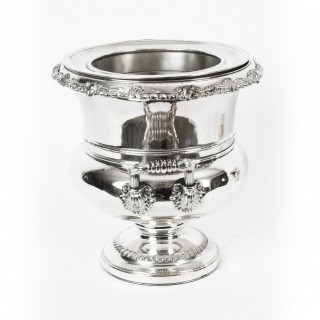 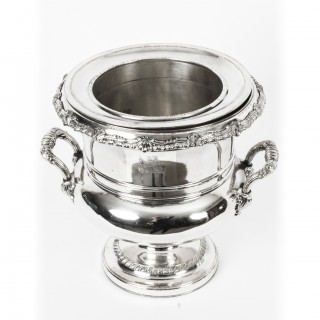 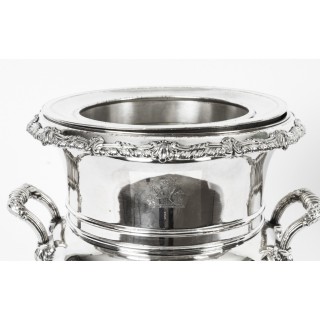 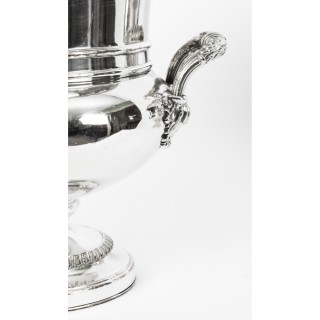 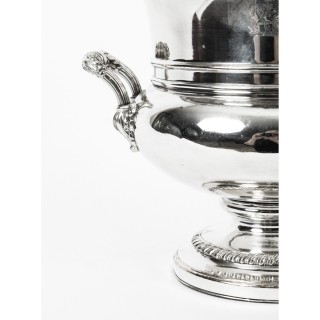 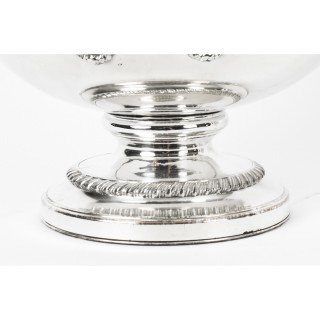 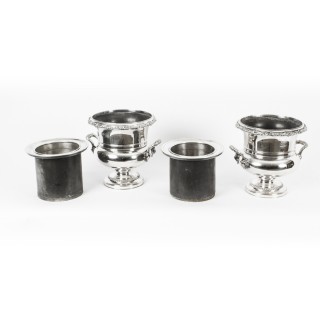 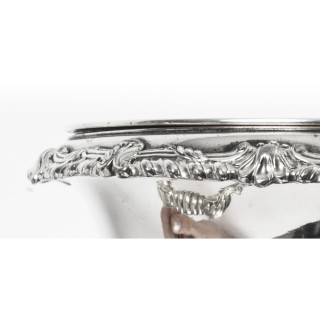 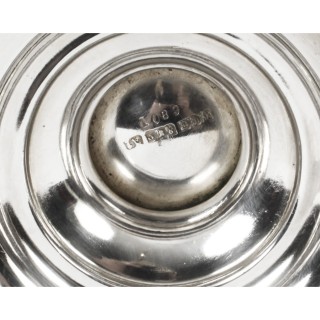 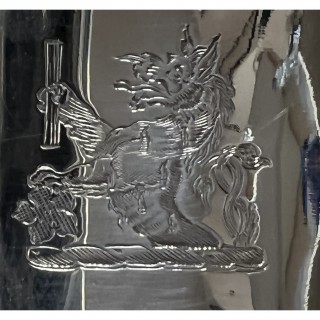 This is an exceptional pair of antique English Old Sheffield Plate silver on copper wine coolers, circa 1815 in date.

The wine coolers stand on widespread circular pedestal bases with fluted and shell decoration, the bodies rims and handles are embellished with applied acathus leaf decoration and each is engraved with the Hise family crest.

Each cooler is fitted with a removable lid and liner.

Add some classic Regency style to your home with this lovely pairs coolers.

Condition:
In excellent condition. As antique items, the coolers show minor signs of use commensurate with age, these minor condition issues are mentioned for accuracy and, as seen in the accompanying photographs, they display beautifully.

Old Sheffield Plate
Thomas Boulsover, a Sheffield cutler, invented the process which became called Sheffield plate Circa 1740. The date is uncertain because no patent was taken out. The next known manufacturer was Joseph Hancock, in 1755, but others also began and in 1784 the Sheffield Plate makers obtained an Act of the Parliament legalizing a mark consisting of the full name of the maker and an associated device.

In Sheffield plate a sheet of silver is fused on to a thicker one of copper and the compound billet rolled, both metals expanding equally, become a thin sheet of copper coated with a layer of silver. About 1840 the Electroplate process superseded Sheffield Plate and it’s production ceased about 1860.

Hise Family Crest
This German and Jewish surname of HISE was a regional name for someone from the state of HESSE in Germany. The placename is first recorded as HASSIA and probably derives from the CHATTI, a Germanic Tribe mentioned by the Roman historian Tacitus in the 1st century. The name is also spelt HASSE and HESS. Surnames are divided into four categories, from occupations, nicknames, baptismal and locational. All the main types of these are found in German-speaking areas, and names derived from occupations and from nicknames are particularly common. A number of these are Jewish. Patronymic surnames are derived from vernacular Germanic given names, often honouring Christian saints. Regional and ethnic names are also common. The German preposition ‘von (from) or ‘of’, used with habitation names, is taken as a mark of aristocracy, and usually denoted proprietorship of the village or estate from where they came. Some members of the nobility affected the form VON UND ZU with their titles. In eastern Germany there was a heavy influence both from and on neighbouring Slavonic languages. Many Prussian surnames are of Slavonic origin. A notable member of this name was Eva HESSE, (l936-l970) German born American sculptor, born in Hamburg into a Jewish family. Her family emigrated to the United States in l939 and settled in New York, where she remained until her death. She attended the Pratt Institute, New York, from l952 to l953, and Cooper Union from l954 to l957. From l965 she worked in a variety of unusual materials, including rubber, plastic, string and polythene. These were made into hauntingly bizarre objects designed to rest on the floor or against a wall or even be suspended from the ceiling. The word Heraldry is derived from the German HEER, (a host, an army) and HELD, (champion): the term BLASON, by which the science is denoted in French, English, Italian and German, has most probably its origin in the German word ‘BLAZEN’ (to blow the horn). Whenever a new knight appeared at a Tournament, the herald sounded the trumpet, and as competitors attended with closed vizors, it was his duty to explain the bearing of the shield or coat-armour belonging to each. Thus, the knowledge of the various devices and symbols was called ‘Heraldry’. The Germans transmitted the word to the French, and it reached England after the Norman Conquest of 1066.