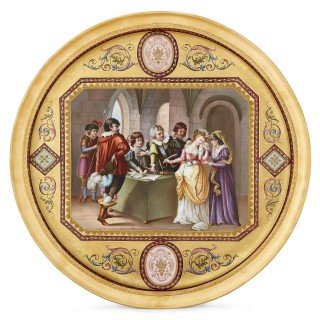 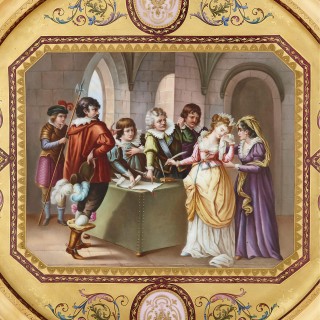 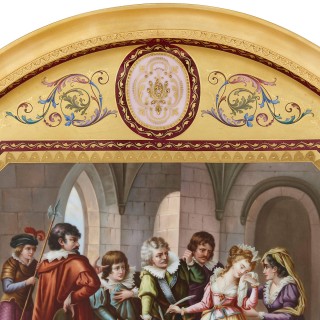 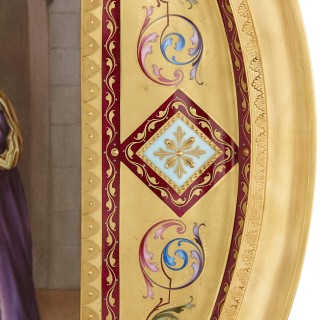 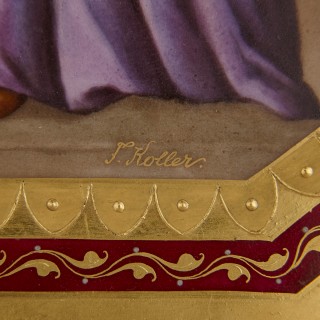 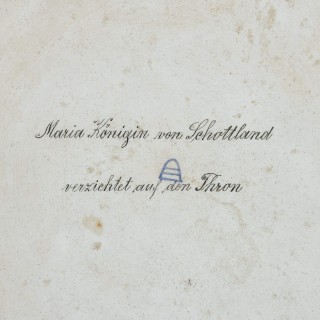 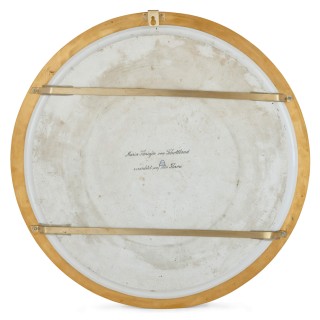 This beautiful charger plate was crafted by the famous Royal Vienna Porcelain Manufactory. Royal Vienna was founded in 1718, making it one of the first factories to produce porcelain goods in Europe. Antique Royal Vienna items are today held in important art collections, including the Uffizi in Florence, the Metropolitan Museum of Art and the Frick Collection in New York. This charger is marked with the blue beehive-shaped shield of the Royal Vienna factory.

The charger features a central painting, depicting the abdication of Mary, Queen of Scots. Mary was forced to renounce the Scottish throne in 1567 by a group of nobles who were angered by her decision to marry the Earl of Bothwell, a disliked figure at court. Mary’s young son, James (later James VI and I), succeeded to the throne following his mother’s abdication. This painting depicts Mary standing before a table, quill in hand, ready to sign the abdication document laid out before her. She wipes away tears from her face, and is comforted by her female attendant. A group of four male nobles gather around the table, pushing Mary to sign away the throne. One man shakes his fist angrily and points, while holding a dagger, to the abdication document. The painting is signed ‘F. Koller’.

The painting is set within a gilt border, which is edged with red bands overlaid with gilt foliate patterns. Light pink ovals and pale blue diamonds decorate the gilt border. These contain gilt central floral motifs, and are placed within parcel gilt red frames, flanked by colourful acanthus leaf scrolls.

The plaque is set within an ormolu frame.