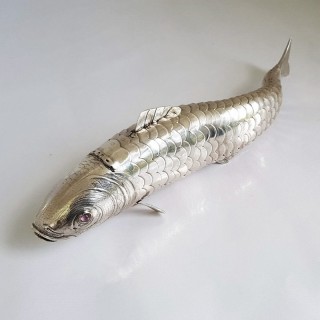 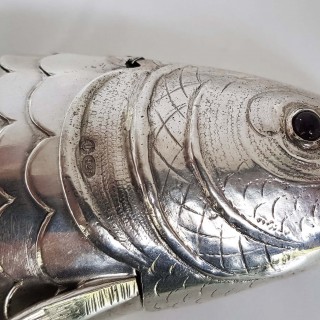 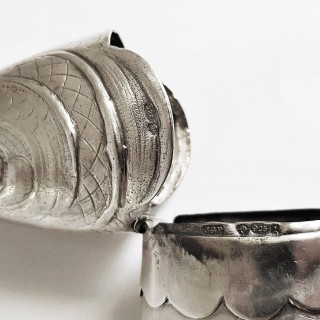 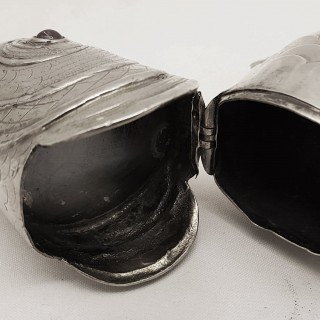 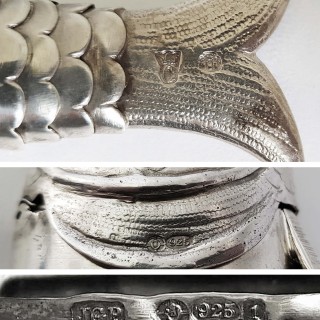 Stamped on head and the tail fin with continental silver marks and London import mark for 1906.

JOHN GEORGE PIDDINGTON
The antique silver industry of Hanau specialised in excellent copies of old master silversmiths’ work, particularly Nuremberg pieces, double lady cups, old goblets, snuff boxes and so on. These copies were marked with fantasy marks, somewhat resembling old marks, which also harmonized with the style of the piece. For example, French rococo style reproductions are marked with French looking marks, German seventeenth century-inspired pieces got German-looking marks, and so on. These marks were usually in a style reminiscent of seventeenth and eighteenth century maker’s marks. Hanau silver was largely imported in UK between the end of the 19th and the beginning of the 20th century, the main importers being Berthold Muller and J.G. Piddington. The UK company J.G.Piddington was a shipping and forwarding business founded in 1849, the firm was a partnership between J.Friend and J. Piddington. The grandson of Piddington, John G.Smith jr. took the surname of his grandfather in 1900. J.G. Smith & Co are noted to have imported a great deal of silver, apparently an important part of their business until 1939. Many of these items, decorative in nature, to be of German origin.

This silver fish is in very good condition. The tail is stamped with German silver marks. The head and top rim of the body have London import silver hallmarks for 1906. The mouth flap has the 925 silver grade mark.