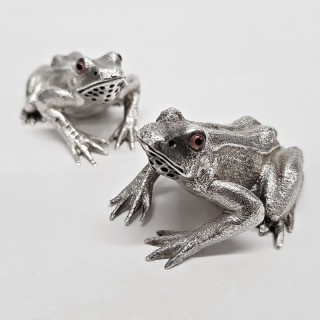 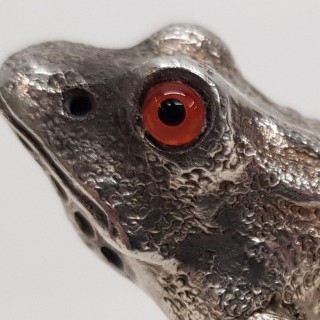 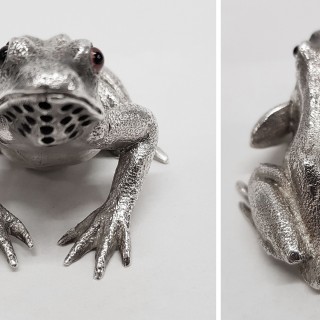 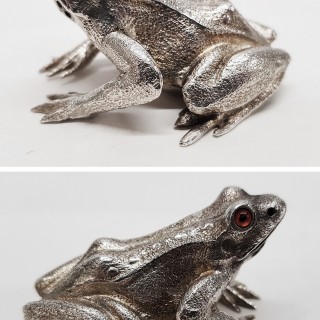 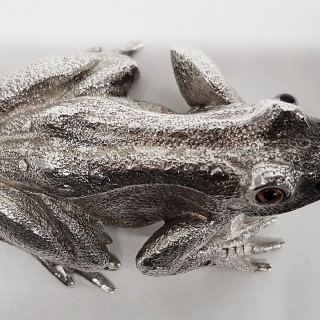 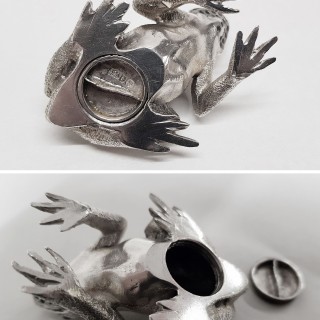 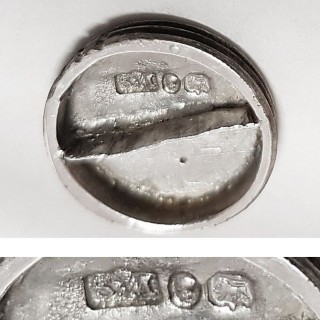 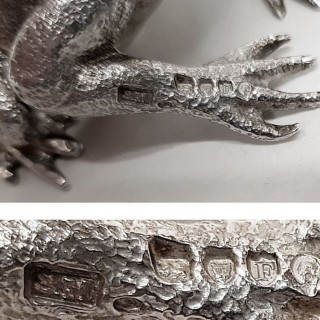 A rare and excellent quality pair of novelty silver pepperettes modelled in the form of crouching frogs. The chased decoration is very fine, crisp and realistic. Bead eyes. The pepper pours from the pierced holes representing the frog’s nostrils and wind sac. The pepper is filled via a screw cover to the underside. London 1881. Maker Sampson Mordan.

Biography – Sampson Mordan (1770-1843), apprenticed to the mechanic John Bramah, established his own business in 1815.

The first patent for a propelling pencil was obtained in 1822 (his co-inventor was John Isaac Hawkins). In 1823 Mordan bought out the rights of Hawkins, and entered into partnership with Gabriel Riddle manufacturing silver mechanical pencils with the marking “SMGR” until 1836 when the partnership was dissolved and the business became S. Mordan & Co.

Sampson Mordan died in 1843 and the business was taken over by his sons Sampson (Jr) and Augustus, They were later joined by Edmund George Johnson and Zachariah Watkins who retired in 1879. In 1898 the company became the limited liability company S. Mordan & Co Ltd. In 1933 the distribution rights on the propelling pencil business were given to L. G. Sloan Ltd, and in 1941, following the destruction of the factory by enemy bombing, the patents were sold to Edward Baker. The firm went into voluntary liquidation in 1952.

In addition to pencils the firm had a large production line of small silver and gold items, most of them belonging to the type of “novelties” so popular at the end of the 19th/beginning of the 20th century. They were supplied to many retailers, including Asprey & Sons and the Goldsmiths & Silversmiths Co. Ltd. Sampson Mordan & Co was present at the 1851 London Great Exhibition and at the 1922 and 1929 British Industries Fair.

These model frogs are in very good, crisp condition with no damage or restoration. Each has a full set of English silver hallmarks to one of the feet, the screw filler cap with maker, Victorian head and lion mark.
Please note that this item is not new and will show moderate signs of wear commensurate with age. Reflections in the photograph may detract from the true representation of this item.