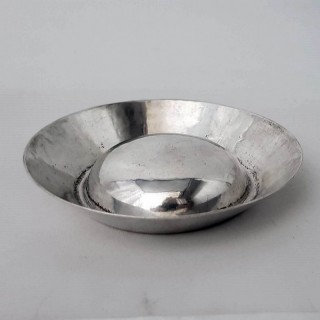 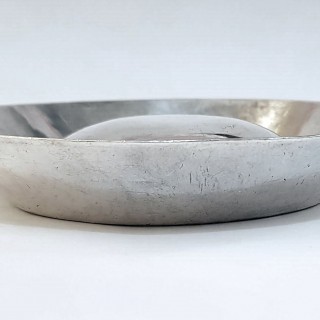 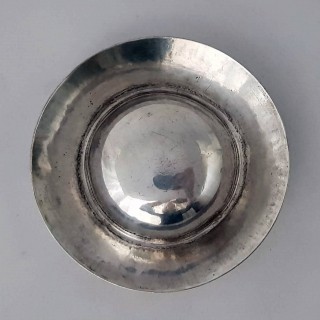 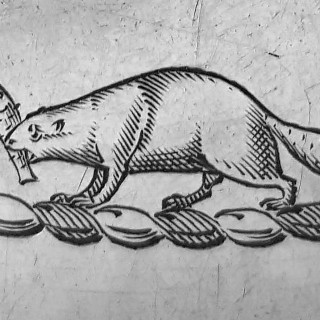 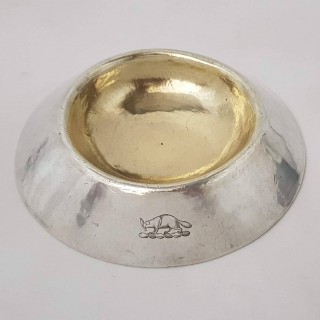 A rare early antique silver wine taster of simple plain form in the shape of a flat bowl with a raised central dome. Very charming with the original hand beaten silver. At a later date the reverse side has been gilded for use as a trencher salt and the crest of a beaver holding a fish hand engraved to the front.

Wine Tasters. The saucer shaped taster was already in use as early as the 14th century BC in Minoan Crete and has been essential in the production of wine right through to the present time. It is used by the sommelier to determine a wine’s quality by assessing the colour, clarity, bouquet and taste. The majority of wine tasters in existence are French. The owners often engraved their name on the taster whose single flat handle often accommodated a neck cord.
Very few English wine tasters were made because wine was not a national product however a number were produced during a short period in the second half of the 17th century. These English examples are rare and anything after this date is even rarer. The early English examples were in the shape of a flat bowl with a raised centre against which the colour of the wine could be viewed. They sometimes have simple wire handles (these often have original rough soldering which can appear “blobby”). The placing of the hallmarks on an English wine taster indicates the way in which it is to be held, and the central dome is generally proud of the rim thus proving it is not being intended for use, reversed, as a trencher salt.