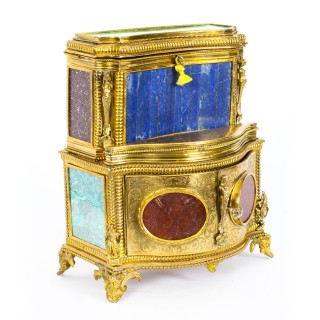 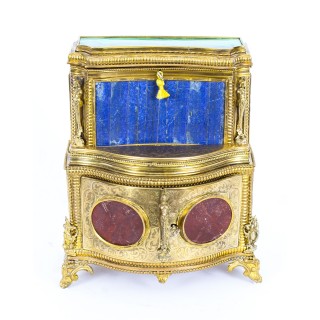 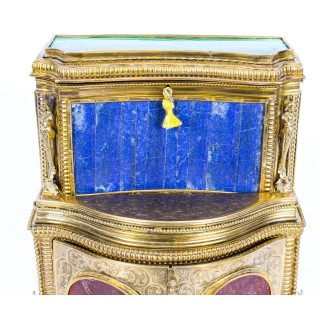 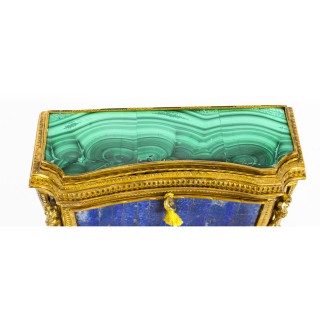 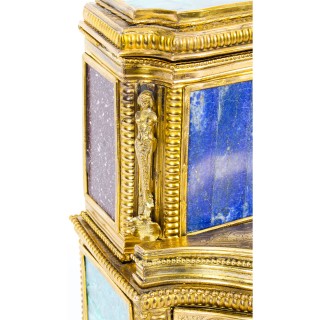 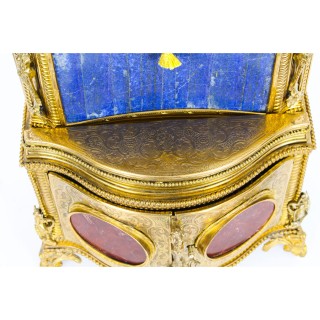 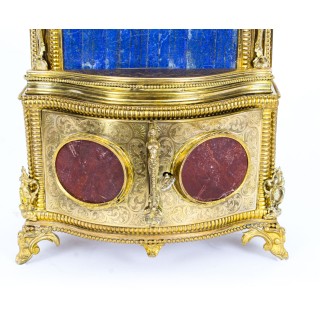 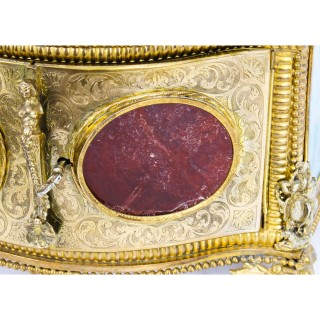 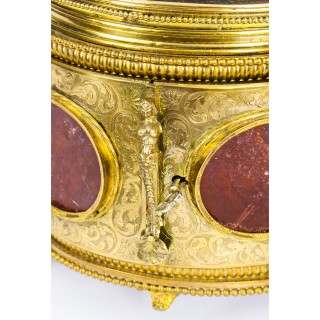 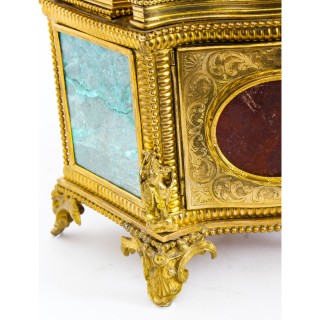 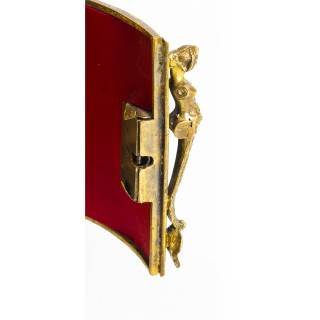 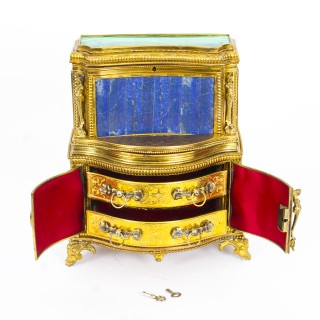 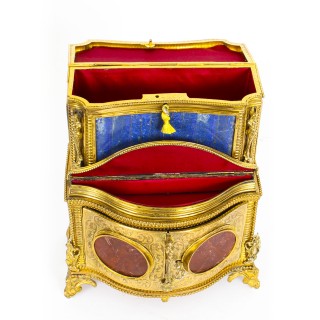 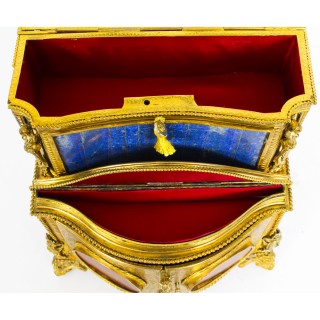 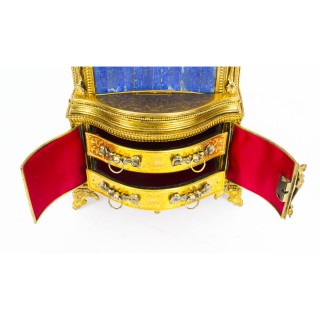 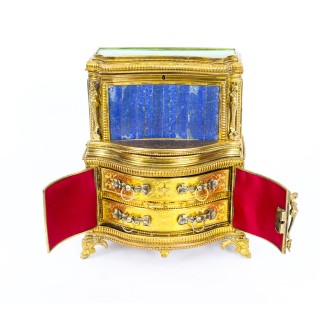 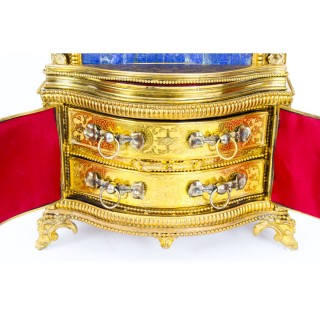 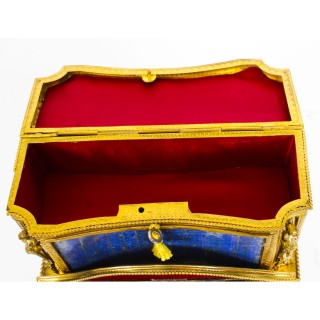 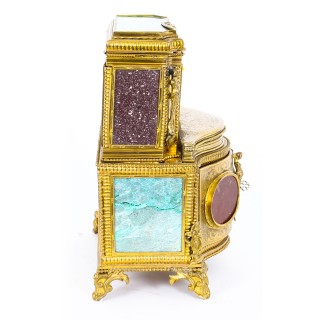 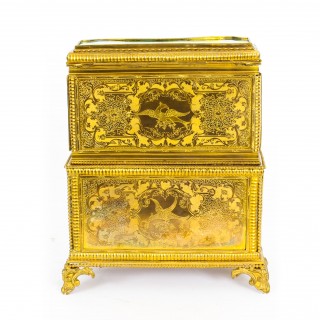 In the form of a cabinet on chest, the lid on the top superbly inset with a fabulous Malachite panel which opens to reveal a deep compartment for storing your precious items. This is above a striking bowed Lapis Lazuli panel flanked by ormolu figures, above another hinged compartment, the sides with rare inset Porphyry panels.

The rear of the casket is of gilded ormolu with beautiful engraved floral decoration.

This item is of superb quality and is incredibly rare, it will instantly enhance any desktop.

Condition:
In excellent condition, the porcelain and ormolu having been cleaned and the interior relined, in our workshops. With no chips, cracks or signs of repair, please see photos for confirmation.

Malachite
is an opaque, green banded mineral. It is believed to be a strong protector of children. It protects the wearer from accidents and protects travellers. Malachite has been used to aid success in business and protect against undesirable business associations. It is a stone of balance in relationships.

Malachite is always green, usually in banded tones varying from very dark green to a mellow green. Most malachite comes from Zaire, Chile and Australia.

Ancient Egyptians, Greeks and Romans used malachite for jewellery and ground it to use as eye shadow. It is used in amulets to protect against the evil eye. In the Middle Ages it was used to protect children from witches and other dangers.

Porphyry
is arguably the rarest and most historically important stone in the world. It comes from only one source; a single mountain in Egypt that the Romans called Mons Porphyry. It is a purple, volcanic stone, very dense and fine-grained, with small white inclusions.
According to Pliny’s Natural History, Imperial Porphyry was discovered in 14 AD by Caius Cominius Leugas, a Roman legionary. Seeing that this hard stone was the purple color which symbolized Imperial power, he had samples brought to the Emperor Tiberius in Rome. When Tiberius saw that this royal-colored stone was solid enough for building and carving, he decreed that “Imperial Porphyry” would be for the use of the Imperial family only.
Tiberius quickly established a quarry on Mons Porphyry and began to use the stone for the decoration of Imperial palaces and other buildings. Later emperors continued the tradition. Imperial Porphyry was used for panels, floor tiles, statues, sarcophagi, and for the pillars of official buildings throughout the Roman world.

Lapis lazuli,
is a deep blue matamorphic rock used as a semi-precious stone that has been prized since antiquity for its intense color. As early as the 7th millennium BCE, lapis lazuli was mined in the Sar-i Sang mines, in Shortugai, and in other mines in Badakhshan province in northeast Afghanistan. Lapis was highly valued by the Indus Valley Civilisation (3300–1900 BC). Lapis beads have been found at Neolithic burials in Mehrgarh, the Caucasus, and even as far from Afghanistan as Mauritania. It was used in the funeral mask of Tutankhamum (1341–1323 BCE).

At the end of the Middle Ages, lapis lazuli began to be exported to Europe, where it was ground into powder and made into ultramarine, the finest and most expensive of all blue pigments. It was used by some of the most important artists of the Renaissance and Baroque, including Masaccio, Perugino, Titian and Vermeer, and was often reserved for the clothing of the central figures of their paintings, especially the Virgin Mary.

Lapis takes an excellent polish and can be made into jewelry, carvings, boxes, mosaics, ornaments, small statues, and vases. During the Renaissance, Lapis was ground and processed to make the pigment ultramarine for use in frescoes and oil paintings. Its usage as a pigment in oil paint largely ended in the early 19th century when a chemically identical synthetic variety became available.