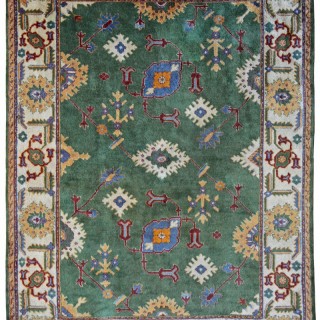 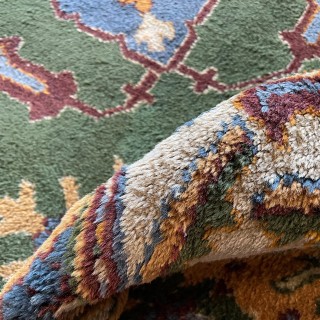 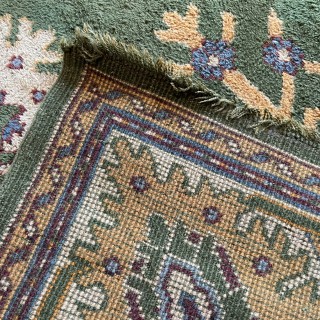 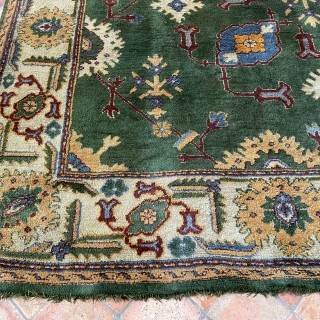 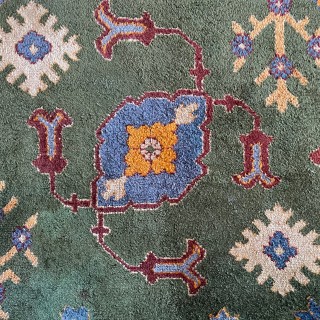 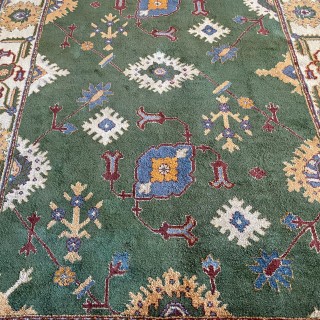 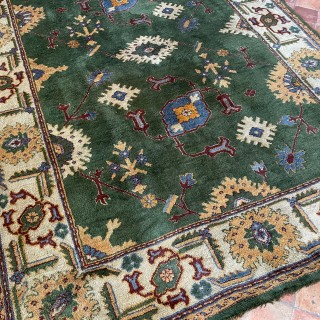 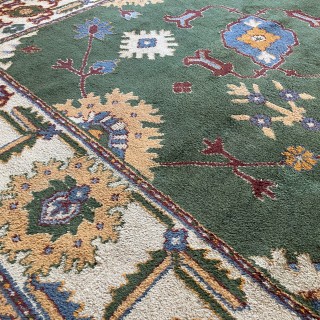 A wonderful rare green antique Ushak carpet from Western Anatolia which was one of the largest rug production areas since the Ottoman Empire.  Ushak designs tend to be more open than Persian rugs and soft dyes are not uncommon.  Often younger Ushaks or Oushaks from the early 20th century will be rich red in colour and use bolder geometric designs.  This good condition Oushak or Ushak has a good wool pile throughout the majority of the carpet, with only a few lower areas of pile.  It could well have been supplied by the famous Maple & Co London, sadly their label was tatty and since been removed. But this style was typical of what they purchased for their store.  Dating from around 1920 a wonderful decorative carpet which would suit a traditional or contemporary room.

Please contact us to arrange a home visit.  We love to travel and would be very happy to show you this antique Ushak carpet in situ along with many more carpets so you can see which best suits your home.

Or please arrange an appointment to visit our showroom in Crondall, Surrey and view one of the UK’s largest collections of beautiful antique carpets and rugs.

Maple & Co was one the largest and most successful British furniture retailers and cabinet makers in the Victorian and Edwardian periods. They were well known for fine quality, craftsmanship and were specialists in copying old designs but bringing them up to date to the more modern trends. They produced many quality pieces of furniture in designs such as Hepplwhite and Chippendale but also were well known for their quality Arts & Crafts Furniture.

Maple & Co was first established by John Maple, a shopkeeper, Surrey, who later opened a furniture shop in Tottenham Court Road but it was his son, John Maple, who pushed Maples & Co to be such a huge success. With his skills in business, by the 1880s they were the largest furniture store in the world as they exported their fine antique furniture to many different countries and were well known throughout the interiors world