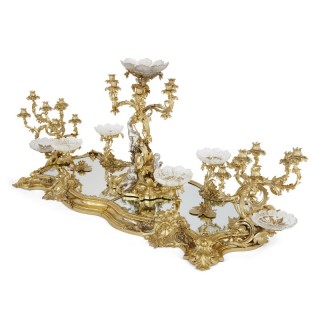 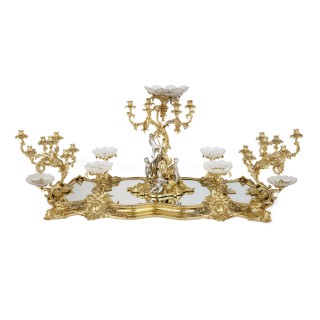 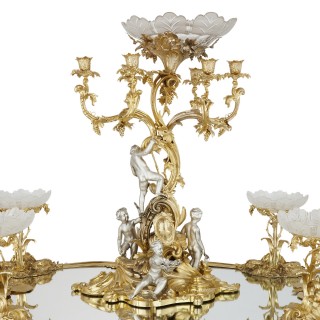 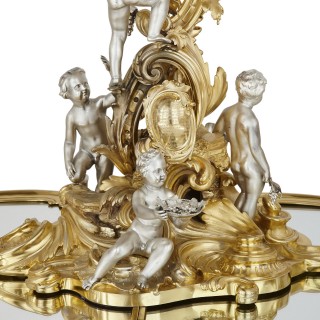 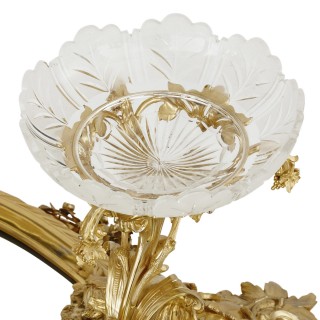 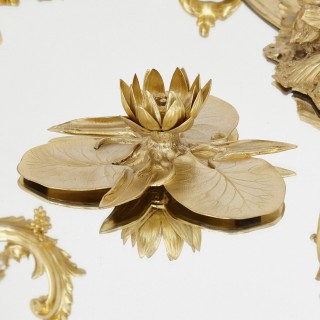 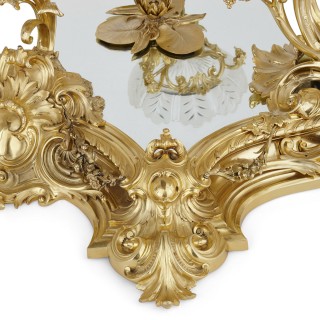 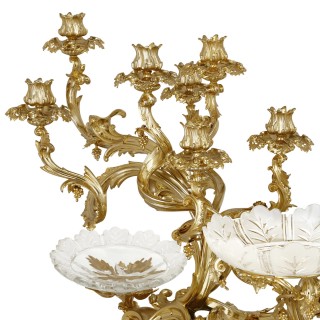 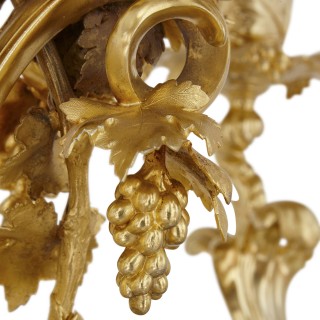 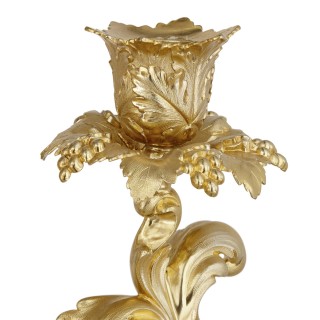 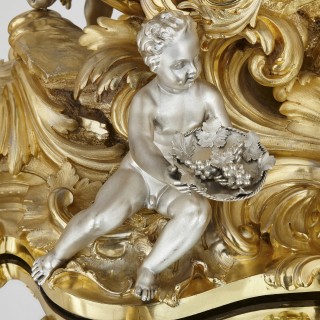 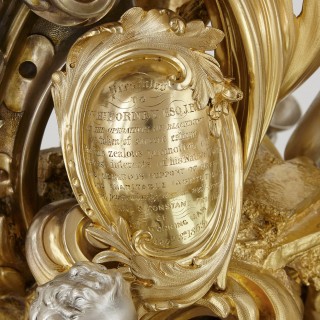 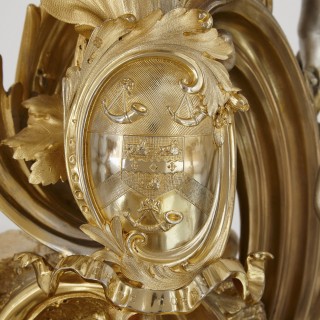 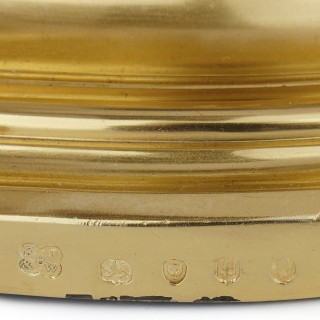 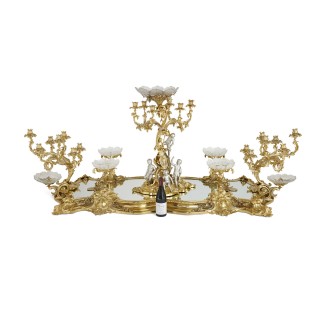 This magnificent centrepiece is wrought from silver and silver-gilt and designed in the superb Louis XIV style by important silversmiths Edward Barnard & Sons.

The centrepiece is supported by a shaped mirrored base, which is mounted with candelabra, cut glass bowls, and elaborate decorative mounts. The central candelabrum is the largest, with five silver cherubs seated and standing on a scrolling rocaille-like base. Some hold grapes and dishes, indicating the bacchanal inspiration for the piece, while one cherub climbs up through the silver-gilt foliate branches. These branches scroll and curve into six lights, from which hang more grapes. It is surmounted by a large cut glass bowl. The two smaller candelabra are placed at either end of the long centrepiece, and are both conformingly decorated with foliate forms: each issuing seven lights. There are six further cut glass bowls, each raised up from the elaborate silver-gilt border of the centrepiece, which is similarly decorated with shells, rocaille forms, and scrolling foliate motifs. Either side of the central candelabrum, placed directly on the mirrored base, are two lily pad mounts, perhaps drawing inspiration from ‘The Lily Font’ (see below).

There are two cartouches on the centre candelabrum, which are both oval shaped and are framed by scrolling acanthus leaf detailing. One of the cartouches features a coat of arms which resembles the Blackburn crest, but with boars heads and hanging horns to the top and bottom. The other is inscribed with the following:

‘Presented to W.H. Hornby, Esq.J.P by the operatives of Blackburn in token of sincere esteem for his zealous promotion of the best interests of his Native Town, his generous support of useful and charitable institutions and particularly as the well-tried faithful & constant friend of the working man. Sept 8th 1853.

The ‘W.H. Hornby’ in question refers to industrialist and cotton spinner William Henry Hornby (1805-1884), who became the first mayor of Blackburn in 1851 and was also elected as national chair of the Conservative Party. As a native resident of the town, he was a celebrated paternalist industrialist who supported the Ten Hours Bill to restrict working hours of women and young people. This particular centrepiece was given to him in 1853, at a ceremony attended by over ten thousand people and reported by the Blackburn Standard newspaper.

In the article of the newspaper, they celebrated the ‘great skill of the artist’ who made the piece. The maker was the firm Edward Barnard & Sons, which was an English silversmiths company originating in 1680. They were indeed extremely skilled craftsmen in silverware, and, at the time this centrepiece was produced, were at the peak of their renown. One of their most important pieces came from Queen Victoria, who commissioned ‘The Lily Font’ in 1840 for the christening of her first child. The font has been used for all royal baptisms of Queen Elizabeth II’s children and grandchildren, and is kept at the Tower of London when not in use.

The present centrepiece is stamped to the rim with silver hallmarks to indicate maker, date, and origins.