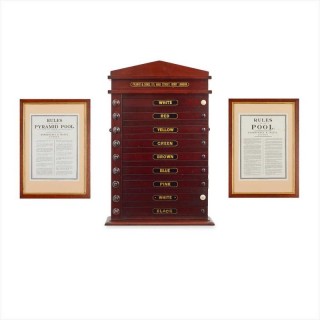 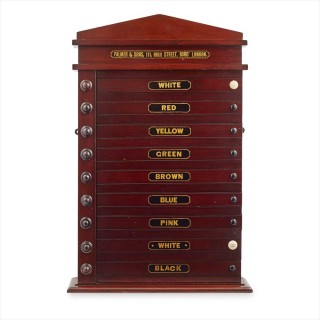 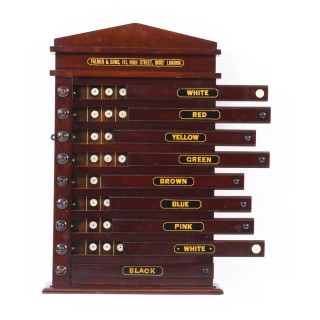 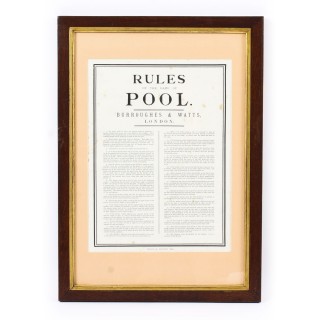 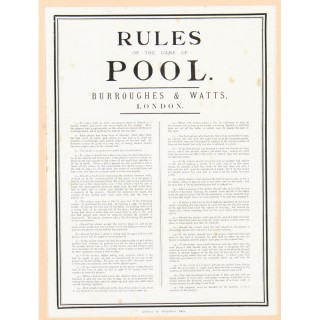 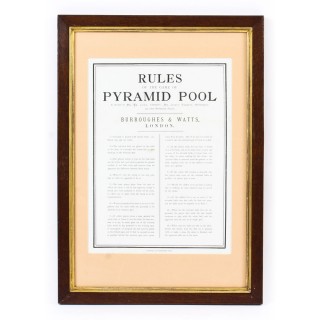 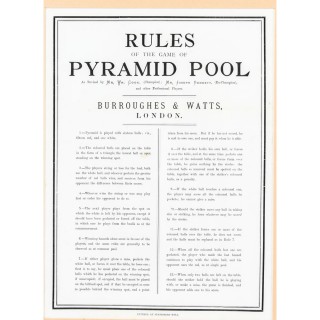 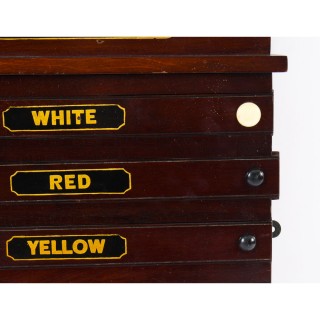 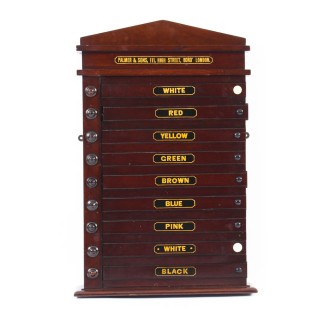 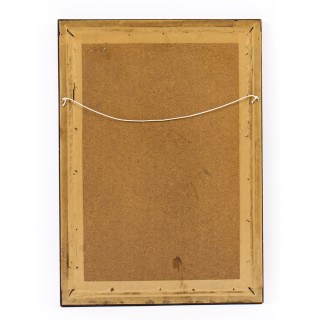 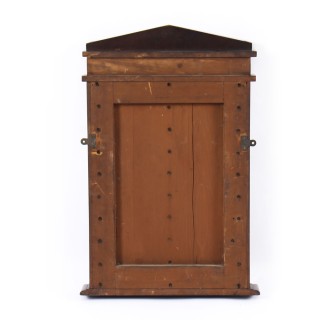 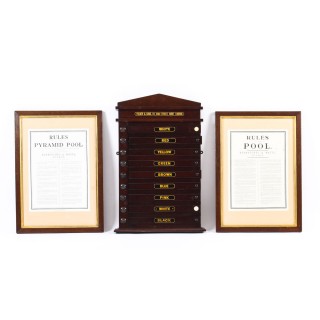 This is one of the best examples of a pool scoreboard, with nine slides and a moulded pediment above the maker’s label:

Together with two prints in oak frames,

This is a fun piece which is sure to attract a lot of attention from your guests and be a welcome addition to any games room..

Burroughes & Watts, London –
firm, which would become one of the most famous of the English billiard table manufacturers, was founded in 1836 by William Burroughes in partnership with F. Watts. William had learnt his trade with Thurston’s, and set up his new business at 19 Soho Square, London. He brought with him from Thurston’s all the latest innovations for billiard tables, immediately starting to produce models with rubber cushions and slate beds. Even though the natural rubber cushions would give extremes of elasticity according to temperature, and the slates where only an inch thick, this was to be the future of billiard tables, and Burroughes and Watts were at the forefront from the very beginning.
They were quickly recognised as a world-class manufacturer and received a prize medal for a table entered for the Great Exhibition of 1851, with a similar award being received at the subsequent London Exhibition of 1862.

In 1860 they were making a modest 150 full-sized tables a year, but by the end of this decade production had doubled. In 1869 they followed the lead of Thurston’s and improved their cushions with “vulcanised” rubber, which were designed to minimise the effect of temperature variations.

The business now looked for expansion away from London, and in the early 1870’s they opened up branches in Dublin and Belfast. At this time most tables in Ireland were made with cast iron frames, and the wooden framed Burroughes & Watts tables proved popular with the locals.

In 1873 the company secured a major contract for billiard tables to “Her Majesty’s War Department and Admiralty” and around the same time received the warrant of Queen Victorian and Edward, Prince of Wales.

The following year, the champion, William Cook, returned from a tour of America with the idea of running billiard tournaments on a “round-robin” basis rather than the straight knock-out principle which had hitherto been used in England. Cook mentioned the idea to Mr. J. S. Burroughes who was sufficiently impressed to promote a tournament, putting up prize money of £100.

By 1875 provincial showrooms and offices had been established in Manchester, and expansion increased with a branch at Newcastle in 1890, by which time agencies had also been established in Australia and New Zealand. In 1893 showrooms were opened in Glasgow, and by the end of that decade, premises in Birmingham and Sheffield were also operating.

Burroughes & Watts were more active in the provinces than any other London maker, and in 1876 they established the Scottish Professional Billiards Championship, providing a silver challenge cup.

Although new models of tables continued to be produced, Burroughes & Watts lagged somewhat behind their competitors when it came to their cushions. Most English manufacturers had switched to the use of strip-rubber from about 1910, and rather belatedly, this feature was incorporated into the Eureka Vacuum cushion in 1922.

However an excellent reputation of The Burroughes & Watts continued into the 1950’s and early ’60’s through now with household names such as Ray Reardon, Cliff Wilson, Joe and Fred Davis, Gary Owen and Rex Williams.