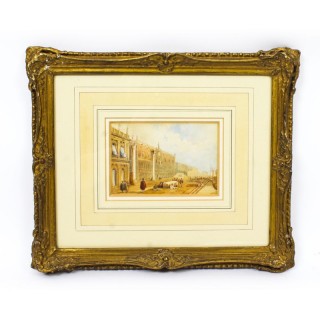 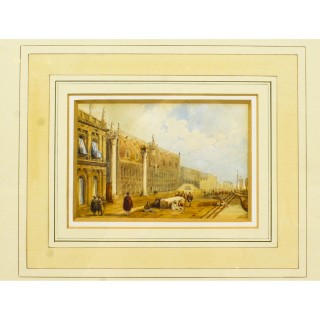 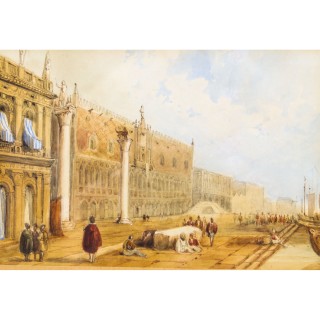 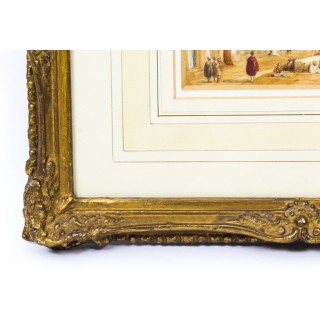 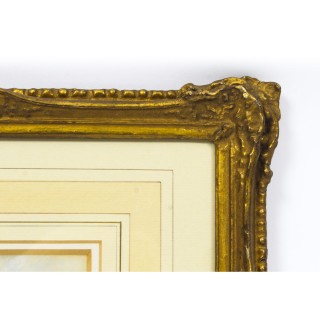 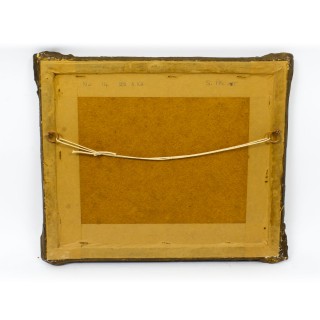 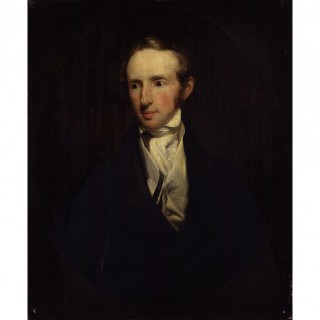 The beautiful watercolour of the view down the Piazza San Marco features the Marciana Library and the Doge’s Palace with the Columns of San Marco and San Teodoro on a cloudy day masterfully painted in subtle hues.

The colours are incredibly vibrant for its age and the painting has a beautiful period gilded frame.

Condition:
In excellent condition and ready to hang on your wall.

Samuel Prout
Samuel Prout born on the 17 September 1783 and died on the 10 February 1852 was one of the masters of British watercolour architectural painting. Prout secured the position of Painter in Water-Colours in Ordinary to King George IV in 1829 and afterwards to Queen Victoria. John Ruskin, whose work often emulated Prout’s, wrote in 1844, “Sometimes I tire of Turner, but never of Prout”. Prout is often compared to his contemporaries; Turner, Gainsborough, Constable and Ruskin, whom he taught. He was the uncle of the artist John Skinner Prout.

Samuel Prout was born at Plymouth, the fourth of fourteen children born to Samuel Prout Senior, a naval outfitter in the dockyard city, and Mary Cater. Attending Plymouth Grammar School he came under the influence of Headmaster Dr. John Bidlake who encouraged the young Prout and Benjamin Robert Haydon in their artistic apprenticeship. They spent whole summer days drawing the quiet cottages, rustic bridges and romantic watermills of the beautiful valleys of Devon. With John Britton, he made a journey through Cornwall to try his hand in furnishing sketches for Britton’s Beauties of England. In 1803 he moved to London, where he stayed until 1812. Marrying Elizabeth Gillespie in 1810.

In London, Prout saw new possibilities and endeavoured to correct and improve his style by studying the works of the rising school of landscape. To earn a living, he painted marine pieces for Palser the printseller, took students, and published drawing books for learners. He was one of the first to use lithography.

It was not however until about 1818 that Prout discovered his niche. Happening time to make his first visit to the Continent, and to study the quaint streets and market-places of continental cities, he suddenly found himself in a new and enchanting province of art. His eye caught the picturesque features of the architecture, and his hand recorded them with skill. The composition of his drawings was exquisitely natural; their colour exhibited “the truest and happiest association in sun and shade”; the picturesque remnants of ancient architecture were rendered with the happiest breadth and largeness, with the heartiest perception and enjoyment of their time-worn ruggedness; and the solemnity of great cathedrals was brought out with striking effect.

He established his reputation with these street scenes and gained praise from his erstwhile student John Ruskin. Until Prout, says Ruskin, excessive and clumsy artificiality characterized the picturesque: what ruins early artists drew “looked as if broken down on purpose; what weeds they put on seemed put on for ornament”. To Prout, therefore, goes credit for the creation of the essential characteristics lacking in earlier art, in particular “that feeling which results from the influence, among the noble lines of architecture, of the rent and the rust, the fissure, the lichen, and the weed, and from the writings upon the pages of ancient walls of the confused hieroglyphics of human history”. Prout, in other words, does not unfeelingly depict signs of age and decay chiefly for the sake of interesting textures, but rather employs these textures and other characteristics of the picturesque to create deeply felt impressions of age nobly endured. Though they are often compared, neither Turner nor Prout were vulgar artists, and while Turner concentrated upon the infinite beauties of nature, Prout was more interested by the cityscape.

Prout was appointed the coveted title of ‘Painter in Water-Colours in Ordinary’ to King George IV in 1829, and afterwards to Queen Victoria.

At the time of his death there was hardly a place in France, Germany, Italy (especially Venice) or the Netherlands where his face had not been seen searching for antique gables and sculptured pieces of stone. He died after a stroke at his home, 5 De Crespigny Terrace, Denmark Hill, London and was buried at West Norwood Cemetery.

A large quantity of his original sketchbooks, lithographs, account books, letters and family materials are held at the North Devon Athenaeum, Barnstaple, Devon. The collection was sold at auction in 2010, and much was acquired by Plymouth City Museum & Art Gallery, adding to its existing holdings of his work.

Samuel Gillespie Prout followed in his father’s footsteps by also painting watercolours. Another member of the family, John Skinner Prout made a career for himself painting and writing books in Tasmania.