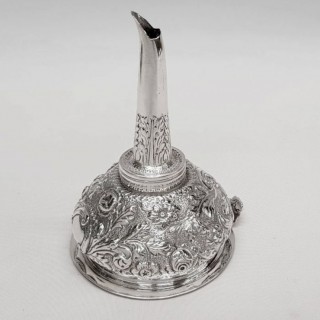 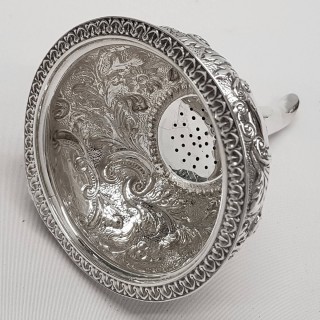 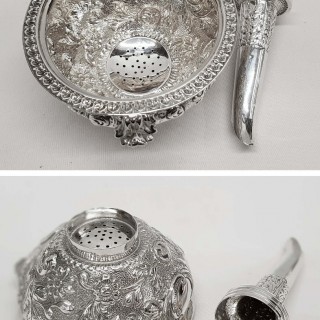 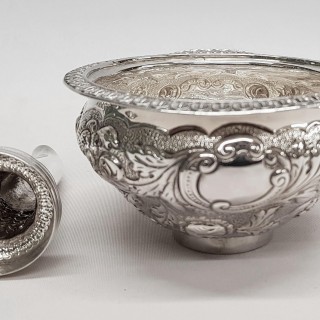 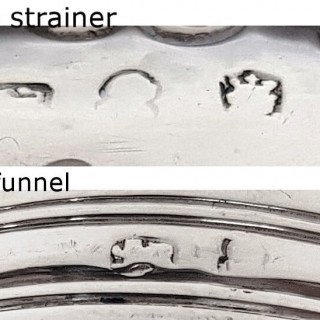 Literature: The wine funnel became common towards the end of the 18th century; a few rare earlier examples exist. With the modern wine making methods wine funnels are generally used just for decanting wine however in olden times the wine needed to be filtered before drinking it. The pierced platform is not normally sufficient to strain the wine properly and needs a piece of muslin fitted between the pierced section and the spout. There are two main varieties: the first has a spout which detaches just below the bowl of the funnel, the other has a detachable inner bowl with a pierced centre inside the main bowl. Occasionally there is a further detachable ring which held the muslin firmly. Funnels exist without a pierced strainer and were probably used to decant liquor or possibly perfume; these are normally smaller in size.

JAMES BARBER & WILLIAM WHITWELL
James Barber and William Whitwell, York silversmiths. William joined James as partner in 1814 after Barber’s previous partner, Robert Cattle, left the business on the 1st January 1814, to take charge of the mails and the post-horses at the York Tavern. Whitwell had been working as an assistant with the firm for many years. The partnership ended on the death of William Whitwell in 1823 aged 36 years.

The silver wine funnel is in very good condition with no damage. The silver marks on both pieces are matching, crisp and clear to read