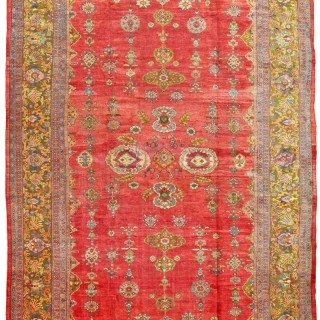 A remarkable antique Ziegler carpet, Persia in fantastic full pile all over. The wool pile is very high and thick being in such excellent original condition. The drawing of this piece is exceptional as it has a really open main field with the design well spaced apart. The border uses subtle hints of pale blue in the flowers with an unusual green border.

The soft red main field is a warm inviting colour ideal for a drawing room or entrance hall.

Ziegler rugs developed an almost immediate following, especially among early collectors included the Guinness family, who laid them in Elveden Hall, their Suffolk estate. Ziegler carpets are one of the only types of Persian carpet which were influenced by western designs and have become one of the most sought after types of carpet.