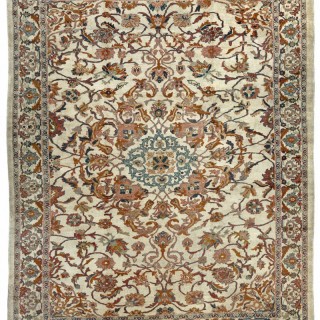 Rare ivory ground and border antique Ziegler-Mahal carpet in excellent original pile and condition.  From a private collection, where it has resided for over 30 years, it has been used but well looked after.  Dating from 1890-1900, the pile height is exceptional throughout, with beautiful soft dyes we associate with the Ziegler & Co workshop carpets.  Some losses to the original fringes at both ends, but this can be improved if required.

Ziegler-Mahal’s are called as such, because the Ziegler workshop produced carpets from their own looms with their own designs.  Using traditional Persian patterns consisting of small palmettes, floral rosettes and leaves, these were soon commissioned in grand sizes for the Western market and the designs, in particular the palmettes, were blown up to large proportions.  Often these Ziegler-Mahals can be considered earlier productions from the workshop, before designs were scaled up and large 5 x 4 metre examples were produced.

The overall design of scrolling leaves and flowers entwining around a subtle medallion.  Rare to find the colour palette which is always desirable of pale ivory ground and border.  Using soft pinks, blues, green and brownish tones, a wonderful array of colours to scheme with or place in a variety of rooms.

Ziegler & co workshop carpets have always been revered and desired by collectors and designers alike.  Ziegler rugs developed an almost immediate following in the late 19th Century, especially among early collectors which included the Guinness family, who laid them in Elveden Hall, their Suffolk estate. Ziegler carpets are one of the only types of Persian carpet which were influenced by western designs and have become one of the most sought after carpets in the world today.

Dating from 1890-1900, the pile height is exceptional throughout, with beautiful soft dyes we associate with the Ziegler & Co workshop carpets.  Some losses to the original fringes at both ends, but this can be improved if required.