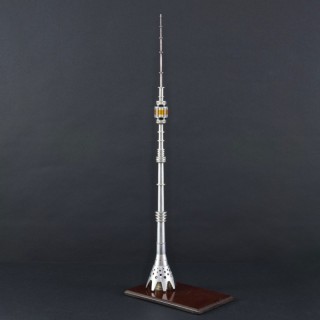 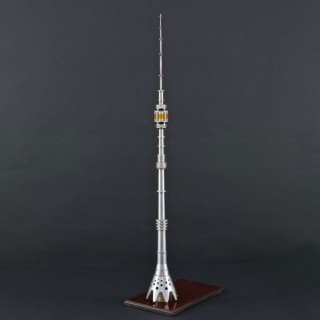 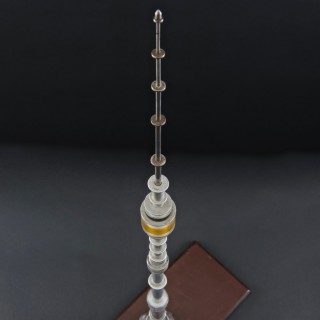 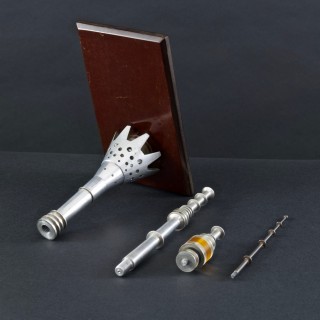 Architectural model of the Ostankino Tower

Architectural model of the Ostankino Tower, a radio and television tower in Moscow, that was distinguished by its record-setting height 1,772 ft (540.1 metres) when it was completed in 1967.
The model is mainly made of precision turned sections of Aluminium alloy with a few sections of Acrylic (Perspex).

The Ostankino Tower is a broadcast transmission tower and large multi communications structure used by numerous television and radio stations as well as satellite TV programs. It was designed by architect Nikolay Vasilyevich Nikitin and in addition to its practical purpose, was also opened to coincide with the 50th anniversary of the October Revolution under the Soviet regime. The tower is part of the World Federation of Great Towers, an association of international monuments. It was the first free-standing structure in the world to exceed 500 meters in height and at 1772 feet, for the first nine years of it’s existence, was the tallest self-supporting structure in the world. It remains among the worlds tallest structures today and is a major landmark that houses a restaurant across three floors and several observation viewing decks that result in it attracting over 200,000 tourists a year. It is named after the Ostankino district of Moscow in which it is located and is an architectural surprise in a city not known for its skyscrapers. Extensive use of pre-stressed concrete resulted in a structure that was a masterpiece of Soviet engineering at the time.The concrete is reinforced with steel cables which are compressed – allowing the structure to stretch in response to forces like wind and structural movement. The pre-stressed concrete with steel reinforcement is also able to handle compression by the same forces. The tower (outside ring) and the shaft (inside ring) of the structure also have separate foundations which allows for differences in pressure exerted on the ground by the two structures.; it has remained the tallest structure in Europe for over 50 years.

Architectural model of the Ostankino Tower