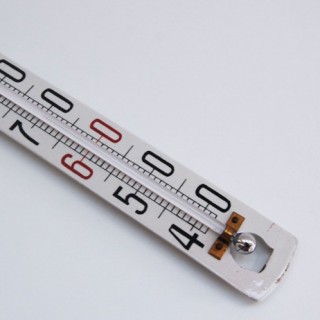 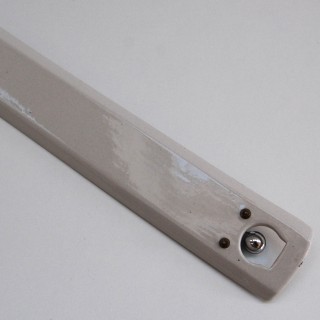 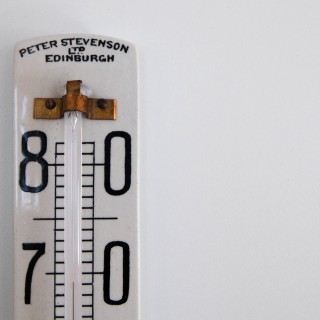 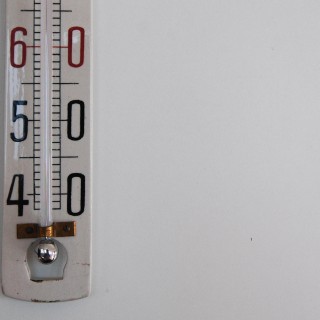 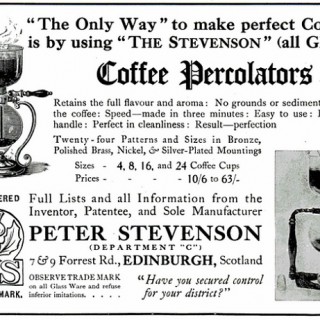 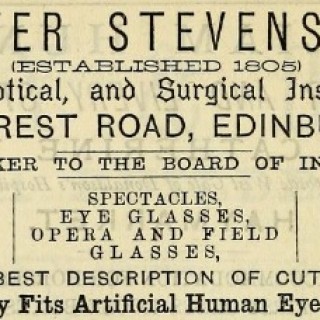 This large (27cms) thermometer is comprised of a ceramic back plate with a painted scale registered to between 40 and 80 degrees. The top of the scale is signed to “Peter Stevenson Ltd, Edinburgh”. The thermometer is fastened to the scale by means of two brass loops with screws that are secured by four nuts to the back of the plate.

This thermometer is an interesting example for its decorative ceramic scale plate but perhaps more unusual for the short range of its scale suggesting that it had a specific employment. Furthermore, the 60 degrees is painted in red as opposed to black suggesting that this temperature was of importance to the user. My hunch is that this is a wine cellar thermometer as most wines need to be stored at around 55 degree Fahrenheit. Coupled with Stevenson’s strong links with the brewing trade it would seem a reasonable assertion.

The company of Peter Stevenson can be traced back as far as 1804 when an Alexander Allan started working in Edinburgh as a philosophical and mathematical instrument maker in Baron Grant’s Close. In 1810 he moved to 9 Lothian Street and the links with the brewing trade began with Allan becoming associated with a Professor Thomas Thomson of Glasgow University to undertake improvements to the saccharometer, an instrument that measures the amount of sugar contained in a solution. Although the dates are unknown, Peter Stevenson apprenticed under Allan whilst at Lothian Street and eventually succeeded him in business upon his retirement in 1836. He must have made an immediate impression as he is listed in 1841 as being admitted a member of The Royal Society of Edinburgh.

Stevenson advertised himself throughout his career as a philosophical, optical and surgical instrument maker and saccharometers and hydrometers remained a mainstay of his stock in trade. An 1880’s advert for his shop proudly states his appointment as, “instrument maker to the Board of Inland Revenue” and these instruments must surely have been the reason for such an accolade. From 1862 to 1870, Stevenson traded from 51 George IV Bridge until he finally moved to Forrest Road in 1871, (his name can still be seen painted (now faint) above the door of the shop today). Whilst at this address, in February of 1884 he was awarded the Reid & Auld Prize for his, “description of meteorological apparatus constructed for the late Lord George, 8th Marquess of Tweeddale”. A surprising accolade for a prize normally associated with clockmakers in the area.

Just two years later in 1886, this notable Edinburgh businessman seems to have met a somewhat inglorious end in what is now known as the Crarae Quarry disaster on Lochfyne. During the period, the blasting of rock from the quarry seems to have become a yearly spectacle for the local people and numerous councillors and distinguished people had boarded a paddle steamer to view it. Shortly after the blast, a party including Stevenson embarked to visit the site but were not aware of a surprise emission of a toxic gas from the rock, the effects of which caused everyone to become disorientated and faint. Fortunately, most survived but seven people died from its ill effects including Stevenson.

Little is known of who continued the business after his death but presumably it remained in family hands as the name remained the same until 1921 when it was incorporated as, “Peter Stevenson Limited”. It remained that way until 1997 when a change to Stevenson Reeves Limited was implemented. The company remains in business today specifically as a supplier of hydrometers, an instrument that has been associated with the company since the beginning of the nineteenth century.

This super thermometer, would have been created after the incorporation of the company in 1921 given the inclusion of “Ltd” on the makers mark and dates to circa 1921 – 1930.