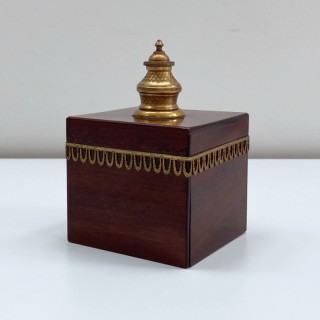 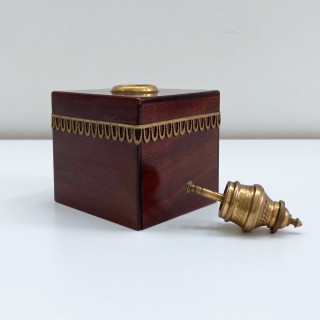 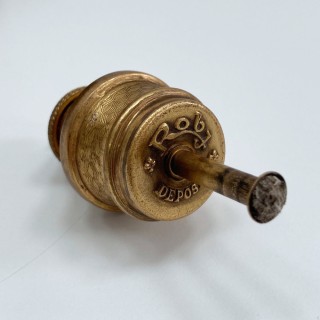 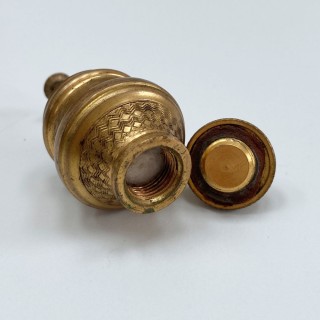 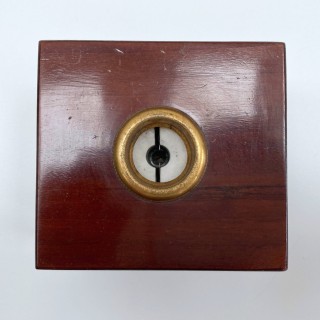 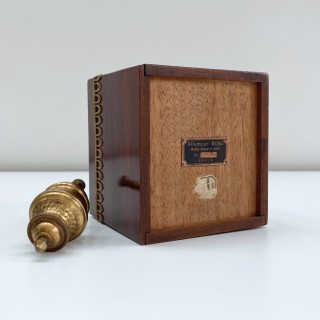 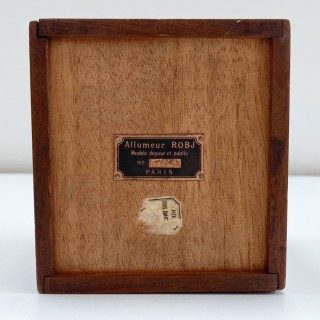 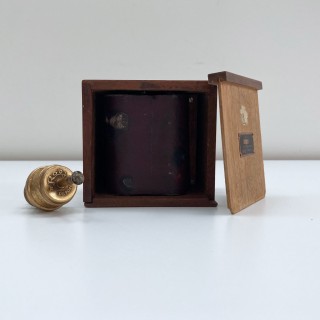 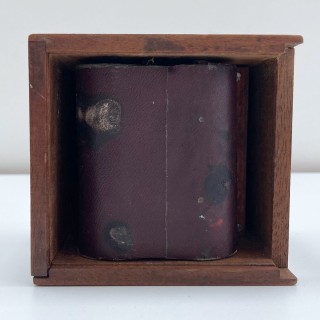 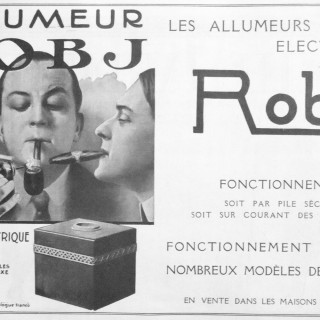 A luxurious table piece appropriate for the era, this example is comprised of dry cell battery confined within a polished walnut case with decorative brass drapery following around all four faces. The top is adorned with a brass ferrule under which is placed a ceramic plate with an opening to the centre which has two electrical touch points. The vase shaped removable lighter is comprised of pressed brass with geometric decoration with a top section that unscrews to reveal a lint pad which would have been soaked in lighter fluid. The tip contains a wick and would have been inserted into the base section. As the top is removed from the base, the flared tip end would make contact with the electrical points in the base and thus cause the wick to ignite for the user.

The base of the removable lighter section is further embossed with “Robj Depose” and the removable slide base also retains its original plaque stating, “Allumeur Robj – Model depose et public” with a serial number of 7638 – Paris.

A simply ingenious example of the domestic uses for which dry cell batteries were being considered after its initial invention in the mid 1880’s by the German scientist Carl Gassner. Having removed the obvious risk and encumbrances of the wet cell battery, the battery began to develop into what has now become a very ordinary and disposable item. The release of luxurious items such as these must have been a revelation to the wealthy Parisian society of the period. An advert depicting the lighter and its very fashionable users is provided in the images, where it is described as being operated by means of dry battery or on mains current.

The Robj Company was founded in 1908 by Jean Born with the name of the company being an anagram of the founder. Robj was originally associated with the retailing of electric lamps and lampshades and so it must be assumed that Born, sought to widen his product base with other electrical and glass items using the manufacturing base from which he procured his stock. The company never moved fully into manufacturing as his strong brand presence meant that he was eventually able to commission glass makers such as Lalique and Daume and ceramic houses such as Villeroy & Boch and Sevres to provide products in his name.

Jean Born tragically died in a car accident in 1922, however the company was adeptly managed after his demise by Lucien Willemetz, a shareholder of the company who also had a flare for design and high fashion. Furious marketing budgets and high-end boutiques increased the company’s reputation and in 1925, they were awarded a bronze medal at the Exposition International Des Arts Decoratifs et Industriels Moderne. It also started to run design competitions where applicants were bestowed with the honour of creating Robj products. That these competitions were so popular makes it all the more mysterious that the company fell into relative obscurity by the end of the decade. It continued to trade until about 1940 but it is likely that it became a casualty of financial and economic impacts during this time. It’s products remain hugely collectible across numerous disciplines.

An interesting piece from both a scientific, and a social history perspective.