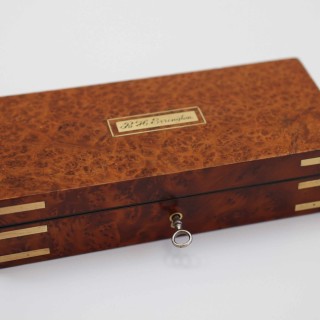 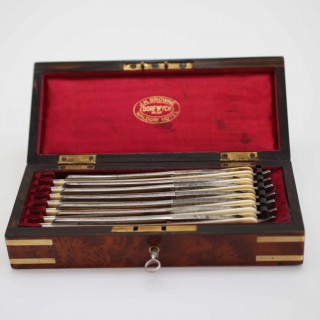 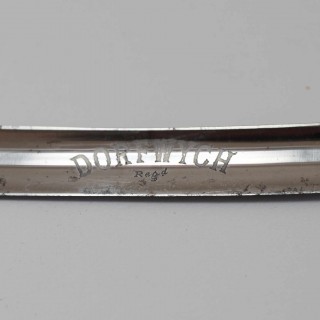 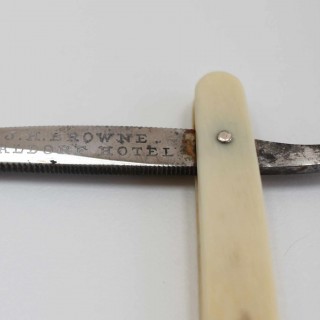 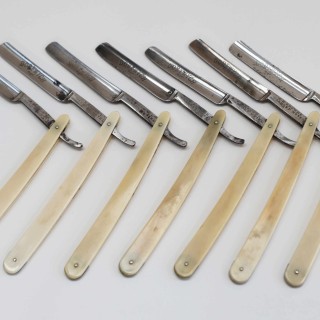 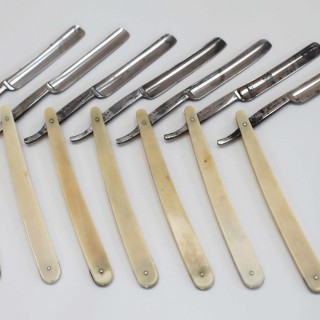 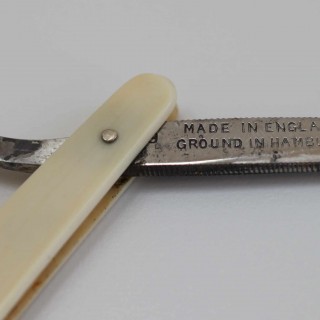 This superior set contains seven razors each engraved to the back edge of the blade with a different day of the week. The blade is further engraved with the registered mark “Dorfwych” an amalgam of Waldorf and Aldwych which is the area in which the hotel is situated in London. The tangs are further engraved to, “JH Browne – Waldorf Hotel” and “Made in England – Ground in Hamburg” to the reverse.

The case comes with a working lock and key and has a brass inlaid cartouche to the top on which the owner’s name, RH Errington is engraved.

John Herbert Browne, the seller of this fine set, owned the in-house hairdressing department of Edward Sanders and First Viscount Astor’s Waldorf Hotel. Upon its grand opening in 1908, the hotel quickly became a London hotspot known for its grand design and generous accommodation. During the 20’s and 30’s it was a hugely popular music and dance venue with the resident Waldorfians house band led by Howard Godfrey tempting such notable names as Al Bowlly to record with them.

Surprisingly little is known of Browne’s operation given the clientele that must have graced his salon over the years but the sales of his products led him to register the trade mark of Dorfwych in 1922. The use of “registered” on the blades therefore suggests that this set was manufactured after that point and during the Deco heyday of the hotel.

The owner’s engraving is similar proof for dating purposes. Reginald Hugh Errington was a Royal Navy Gunnery Officer by 1904 and was serving as a Lieutenant at the start of the Great War, rising to the rank of Lieutentant Commander by 1917. He served variously on the HMS Challenger, Cumberland, Excellent, Havelock, Hindustan and Ajax throughout the war and was present at the Battle of Heligoland and the ill fated Gallipoli campaign.

He gained the rank of Commander in 1921 and finally placed on the retired list by his own request in 1926 although he worked during World War II as a liason officer with US Naval Forces until his retirement this time with the rank of Captain. His services with the US, resulted with him being awarded The Legion of Merit in 1946.

In 1940, his daughter also married Air Commodore, Sir Peter Beckford Rutgers Vanneck. Vanneck is likely to have met his future wife through his early service with The Royal Navy and served with distinction throughout World War II being present during the operations to sink The Bismarck. He served as Queen Elizabeth II’s Aide de Campe from 1963 to 1973 and eventually became Lord Mayor of London in 1977.