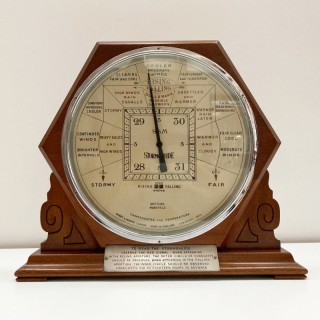 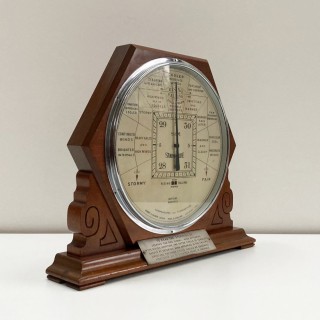 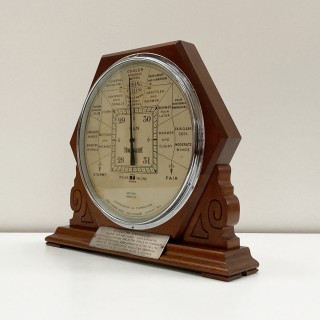 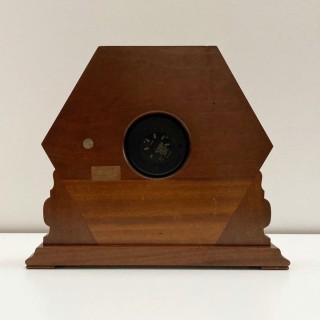 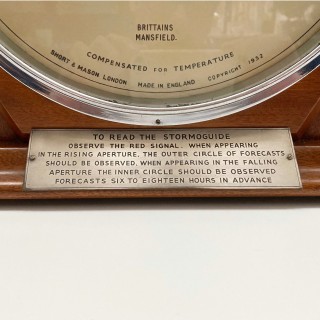 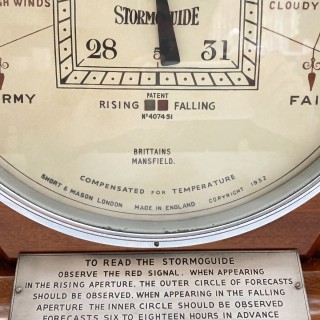 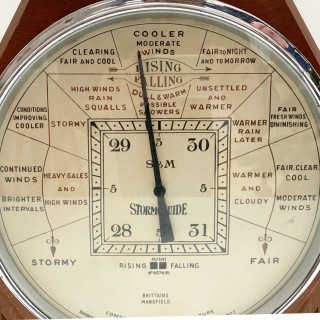 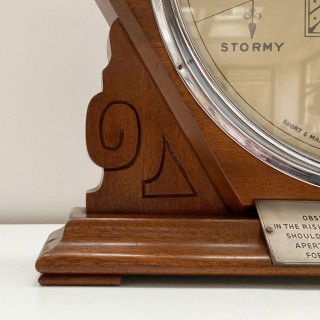 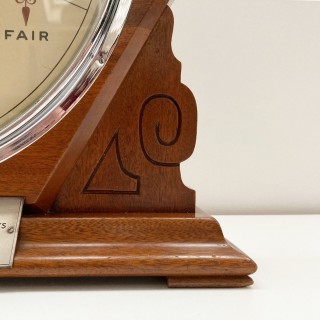 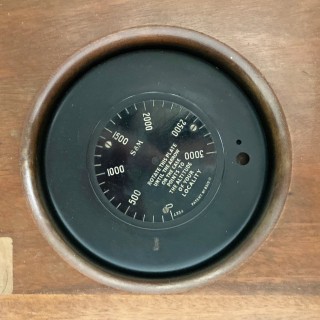 For sale, an Art Deco period shop display Stormoguide aneroid barometer by Short & Mason for the retailer and jewellers, Brittains of Mansfield.

The stormoguide was a clever means of popularising the barometer by Short & Mason in the early Twentieth Century. Rather than trying to purely interpret the barometric pressure in inches or using the old Admiral Fitzroy method of forecast, the company sought to provide visual description and meaning to the movement of the dial in the same way as Negretti & Zambra were doing with their forecasting aneroid range of products. These were not necessarily new indices but Short & Mason sought to remove the complication of reading a barometer and to make it an immediate and useful piece of household equipment without reference to any other instrument. An ingenious design which received a good amount of popularity upon its release, sadly the onset of radio and television forecasting largely put pay to any further developments but it (and its Negretti counterpart) really reflect the pinnacle in the development of the barometer as a domestic instrument.

This example of the “Stormoguide” was manufactured for use in shop displays as both an instructional tool to allow customers to understand the new product but also as a head turner for passers-by. The practice of putting oversized barometers as shop displays was popular during the Victorian period and this model is perhaps the last example of the practice. Most of these display pieces were dual branded with the optician’s or jewellers that were selling Short & Mason’s product. Brittains jewellers remains in business to this day and has been trading since the 1909. It must have therefore graced their windows in the very early years of its trading history.

The makers Short & Mason were formed by Thomas Watling Short & William James Mason in 1864 and were based in Hatton Garden, London. They were makers of barometers and scientific instruments but a significant part of their business was focused upon aneroid barometers and later barographs for which they had an unparalleled reputation by the end of the Nineteenth Century.

The partnership between the founders was dissolved at the turn of the century and the company was acquired by the US Company, Taylor Brothers who themselves had been in the business of scientific instrument making since 1851. Taylor Brothers benefited from the expertise that Short & Mason brought to the company and the instruments produced, were variously signed depending on which market the instrument was destined. In 1907, the US arm renamed itself The Taylor Instrument Company and began to use the brand name of, Tycos. This was eventually dropped in 1932 and the company reverted back to the Taylor name.

In the UK, Short & Mason moved from Hatton Garden to Walthamstow in 1910 and in 1921 lodged a copyright for a new means of forecasting the weather by observing changes in atmospheric pressure. Later in the twenties, a similar US copyright was taken out by Taylor Instruments who also sold the “Stormoguide” in America. Taylor Instruments eventually ceased the production of Short & Mason instruments in 1969 due to dwindling retail demand, the focus of the business was diverted thereafter to industrial applications.