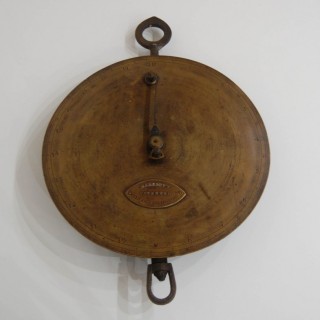 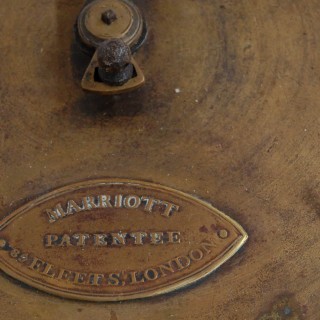 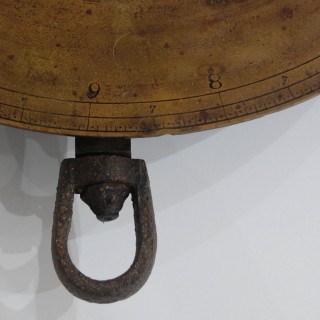 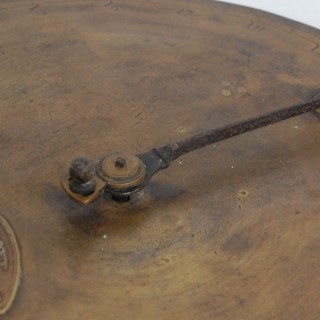 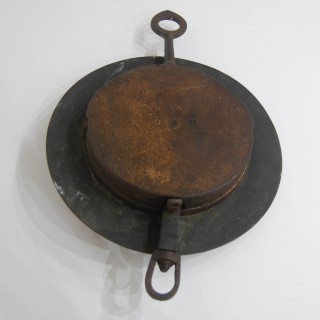 This example is comprised of a thirteen inch diameter brass scale plate divided for measurements of up to 20 stone with each stone subdivided for pounds. The plate holds an iron and brass pointer attached to a central shaft and a brass back stop at the zero point.

Underneath the central shaft is a brass plaque stamped to “Marriott Patentee, 89 Fleet Street, London”.

The scale plate is attached to an iron cased back which contains the original working spring and fixed ring support to the top for hanging and a ring support at the base which would be used for attaching the item to be measured.

The manufacturer of this early scale was a Henry Marriott who is listed in most directories as an ironmonger and inventor. His early career is somewhat difficult to deduce but Marriott must have reached some level of prominence during the reign of George III as by 1820, he was one of the largest ironmongers in London with an insured stockholding of £8600.

Marriott was also a prolific patentee and throughout the 1820’s he is documented as having lodged patents for water closets (1824), stoves (1825) and hydraulic machines (1828), the latter being co-patented with Augustus Siebe of Siebe & Gorman fame.

The “patent dial weighing machines” was advertised in the John Bull newspaper by 1821 but an interesting letter in The New Sporting Magazine of 1839 raises questions as to the real inventor of this scale. Augustus Siebe’s obituary reflects that he moved to Britain in 1814 and after perfecting his English became a foreman at an engineering firm (probably Marriott’s). He is also listed as having patented his own spring balance weighing machine in 1819.

The 1839 publication contains a letter to a friend, which recommends a “Sportsman’s weighing machine” associated with fishing and he quotes:

“It is altogether, a very beautiful contrivance, and by the way, emanates from the same clever engineer, who amongst other things, invented what is called, ‘Marriott’s Patent Circular Dial Weighing Machine’, so universally used, and also the well-known diving helmet and dress”.

This reference from this obscure publication of the first years of Queen Victoria’s reign provides two useful pieces of information, firstly that the design saw enduring popularity for at least twenty years and that although the machine was widely considered to be of Marriott’s design, it was actually one of the first inventions of Augustus Siebe. It seems likely therefore that Marriott bought or obtained the rights from Siebe (who is listed as the patentee) but by using the words ‘patentee’ has since been considered to be the inventor. In any case, the issue seems not to have been a problem for Siebe as he co-patented a hydraulic machine with Marriott nine years later.

Marriott’s advertisements from 1821 are therefore somewhat deceiving and he probably worded the first sentence in the following quote to obscure the fact that he had “obtained” the rights from a third party:

“Dial Weighing Machines – H. Marriott having obtained His Majesty’s Royal Letter Patent for an invaluable improvement in weighing machines, begs leave to recommend them to the public, as the most perfect and useful article for that purpose ever constructed for accuracy, simplicity, expedition & reliability, it stands unrivalled as it instantaneously shews the exact weight from one ounce to a ton without the use of weights, thereby saving time and labour. Being perfectly portable, it may be used in any situation…”

It is commonly understood that the spring balance was first invented by Richard Salter of Bilston in 1770. Together with his nephews John and George his invention built a company that still exists today. The differentiation in Siebe’s patent is explained in the 1842 Encyclopaedia Britannica as such:

“In this balance, by Mr Marriott of London, the spring is formed into an arbitrary curve, and is placed in a shallow brass box behind the dial; one end of the spring is fixed to the upper side of the box, and the other end to the head of the rod which carries the hook. Near the same point of this rod is also attached the head of the rack plate, which as the hook becomes loaded, is lowered by the spring and turns the pinion, and with it the pointer, which indicates the weight.

When in use, the portion of the spring to the left is extended and that to the right compressed; and during descent, the rack is kept in gear with the pinion by a screw pin at its right side.”

The longevity of this variant on Salter’s design shows that it must have been favoured by a broad proportion of its users and so it must also have continued to be a very profitable endeavour for Henry Marriott. Beyond the 1820’s, Marriott is known to have formed a partnership with his son Frederick and a prominent builder names Spicer Crowe and the company existed until 1845 at which point the firm of Marriott & Crowe was dissolved by mutual consent. It seems not to have affected Marriott as he is listed in the 1851 catalogue for The Great Exhibition as being an exhibitor of weighing machines. What happened to Marriott after this historic event is currently unknown, he must have been advanced in years by this point but in any case, the inventor Augustus Siebe went on to overshadow his former employer with numerous inventions relating to diving. His company Siebe & Co remained under family ownership after his death in 1872 and was later renamed as the famous Siebe & Gorman.

This unlikely and misunderstood piece of engineering history is the first marketable product that emanated from the inventive mind of Augustus Siebe. Marriott was a shrewd businessman and made full use of the rights afforded to him by effectively shrouding Siebe’s name but it is all the more important to ensure that this neat invention is afforded its appropriate place in history.