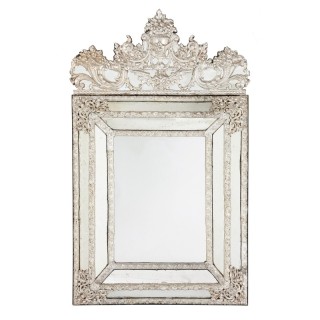 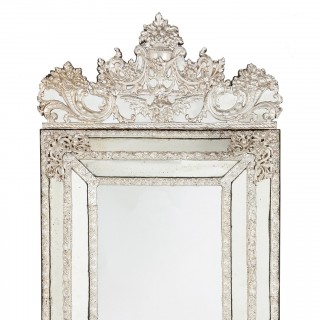 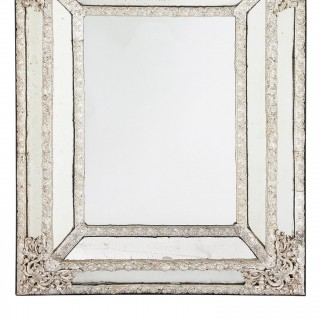 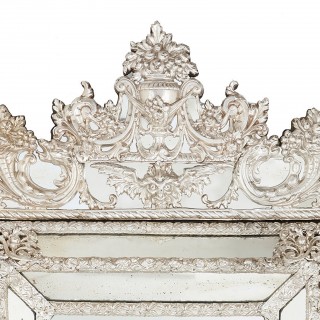 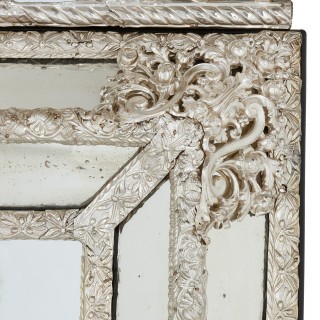 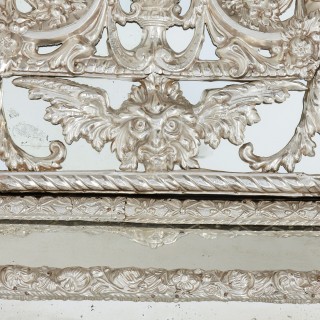 Imitating the Dutch eighteenth century Baroque style, and crafted in France in the nineteenth, this exceptional piece is a large rectangular silvered mirror, combining a decadent, indulgent, elaborate Baroque design with the skill and proficiency of nineteenth century French craftsmanship. Notable for its impressively large size, it features delicate floral embellishments and a decorative vase surmount, and this stunning antique mirror would make a beautiful addition to any elegant interior.

Although it was made in France, the silvered mirror is actually fashioned in the 18th century Dutch style. Known as the Dutch ‘Golden Age’, this period of the decorative arts was inspired by the previous Baroque style forms, which can be distinguished on the present antique mirror. Originating in 17th Century Italy, the ornate Baroque style is characterised by its dramatic exuberance and luxurious decadence. Floral garlands and scrolling foliate imagery are common to Baroque design, as is the use of heavy textiles such as velvet and damask. The influence of the Baroque is evident in the silver mirror’s heavily ornamented frame, which features lavish, swirling embellishments that are balanced by the structured rectangular frame below. The Baroque style of the Dutch Golden Age experienced a 19th Century revival, which is excellently demonstrated by this large antique silvered mirror.

Featuring extensive floral decoration both to the four corners, in elaborate corner ornaments that frame the rectangular beams of the mirror’s lattice-like structure, and to the mirror’s crest, it is topped with a single vase motif, that unites the scrolling, winding floral decoration into a pleasing symmetrical structure, giving the Baroque grandeur suitable French refinement and style, creating a unique and highly desirable interior piece.