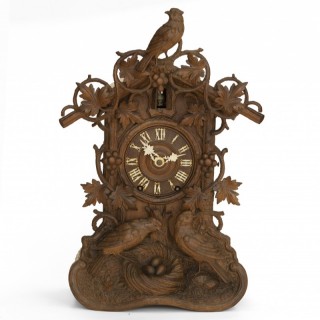 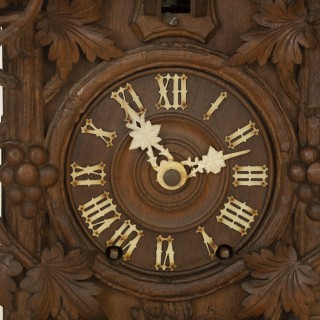 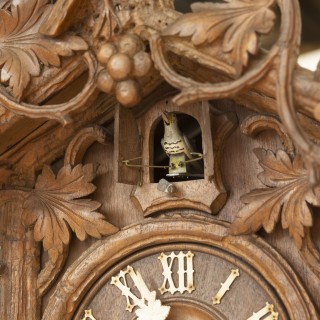 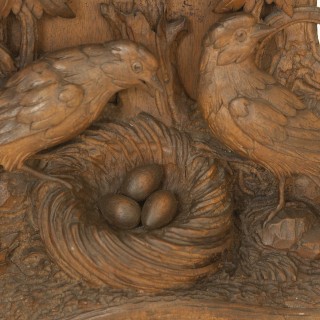 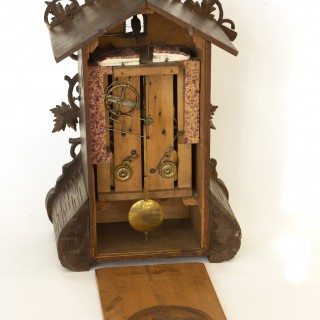 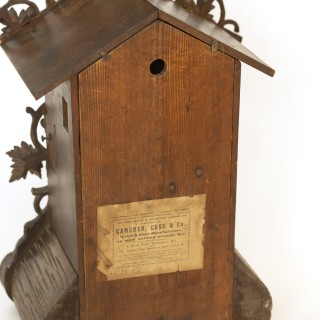 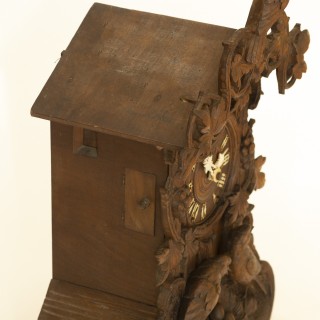 This is a fine example of model # 589 from Johann Baptist Beha, the most prestigious of Black Forest cuckoo clock makers, dating from c.1895. This design is a model I have not seen, other than in Beha’s catalogue from the 1890s.

The carving of the case is exceptionally good. The shaped sides are the most distinctive feature of this model, but the two cuckoos tending to their nest to the centre are rather magnificent, depicted in great detail.

The eight day twin fusee movement has wooden plates and the usual Beha distinguishing features – the coiled end click springs on the fusee stop work and the tapered steel piece behind the count wheel, both visible on the back plates.

The clock cuckoos on the hours and the passing of the half hour. The cuckoo is followed by a strike on the coiled gong mounted on the backboard.

The back door has a hand-written 589 on it, which corresponds to the model number in the catalogue of around 1895. It also bears a sticker for Camerer Cuss, a London-based clockmaker who imported a large number of high quality Black Forest clocks into Great Britain.

Although currently working well, the movement will undergo a thorough overhaul and will be guaranteed for 3 years.

Beha Black Forest clocks are among the most highly sought after. The factory is known to have produced some very high quality clocks, some with music complications or a cuckoo and quail. Johann Baptiste Beha was the only Black Forest cuckoo clock maker to be awarded the Gold Medal of the Vienna World Trade Exhibition of 1873. The cases for Beha clocks came from case/woodcarvers shops located in different towns of the Black Forest, and hence have slight variations from carver to carver.