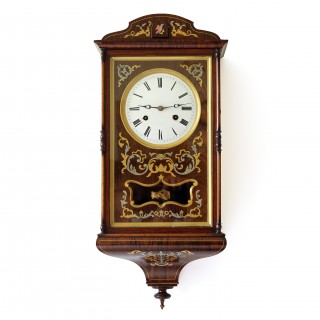 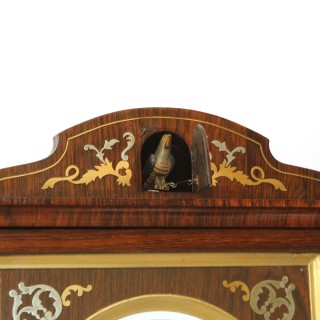 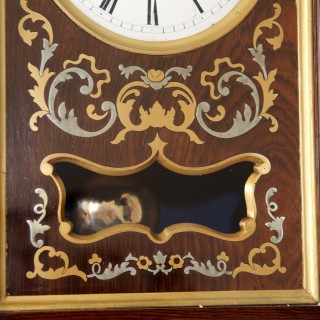 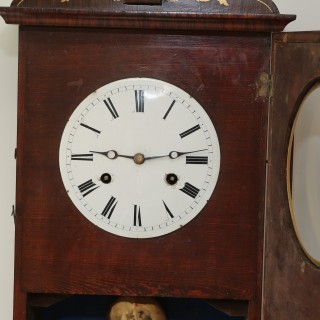 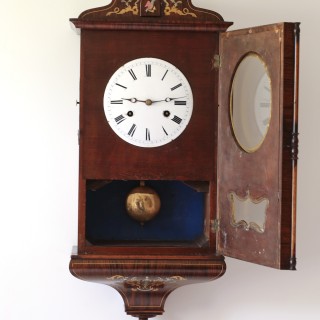 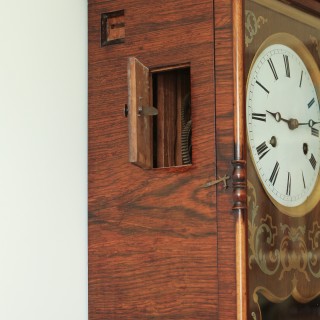 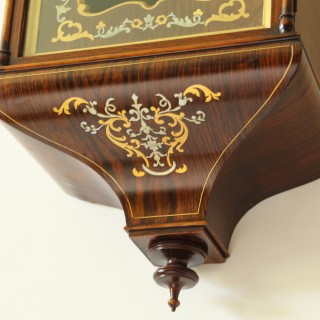 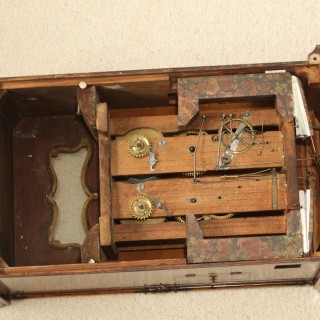 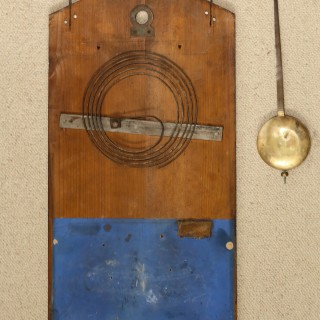 A very rare model of antique cuckoo clock by Johann-Baptiste Beha, dating to the 1870s. It was more common for Black Forest wall clocks to have weight-driven movements and the shelf (bracket) clocks to utilise the fusee movements introduced by Johann-Baptiste Beha to Black Forest clocks in the 1850s. Unusually, this wall cuckoo clock has a spring-wound fusee movement.

The attractive Biedermeier-styled rosewood case is inlaid with scrolling brasswork and pewter acanthus leaves. The top is centred by a door revealing a hand-painted cuckoo with articulated wings, tail and beak. The whole of the front is behind glass; the door opens to reveal a plain wooden surround to the white painted convex metal dial. The original black steel hands are elegantly pierced and finished.

The wood plated 8-day fusee striking movement has the usual Beha distinguishing features – the coiled end click springs on the fusee stop work and the tapered steel piece behind the count wheel, both visible on the back plates. It strikes the hours and the passing of the half hour on a gong, accompanying the call of the cuckoo.

An original BEHA sticker remains intact on the rear of the backboard.

The movement is awaiting servicing, but is complete with restored bellows and the original pendulum. Once overhauled the clock will be sold with a 3-year guarantee.

Johann-Baptiste Beha (1815-1898) was born in the Black Forest, Germany to a clockmaking family. He opened his own workshop in 1845 in Eisenbach, and was a pioneer of fitting a cuckoo clock movement to the chalet ‘railway house’ style of case. Unlike many large factories which joined the cuckoo clock production in the latter years of the 19th century, Beha did not ever eschew quality of production in favour of quantity. He was awarded a Gold Medal of the Vienna World Trade Exhibition of 1873, the only Black Forest clockmaker to be thus honoured.