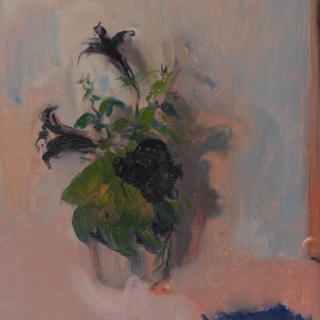 Medium: Oil on Board.

Serena Rowe is a Scottish painter of landscapes, interiors, and still lifes. She trained at the Florence Academy of Art, following graduation from the University of Edinburgh in 2000. Serena was awarded the Royal Glasgow Institute of Fine Arts Exhibition Award in 2004 which led to her ﬁrst solo show at the Kelly Gallery, Glasgow in 2005. Serena then went on to attend the Scholarship postgraduate MA course at the Prince’s Drawing School the following year. She was a Winsor & Newton Young Artists Finalist at the Royal Institute of Oil Painters annual exhibition in 2010 and exhibited at the Glyndebourne Festival in 2007. Her work is represented in the collection of HRH The Prince of Wales.

“I had always wanted to paint people but when I couldn’t find anyone who would sit for me I started to find things that would: pieces I found around me in my studio, in my grandmother’s house, in the woods, or brought in by the tide on the shore. My foraging resulted in a cuckoo’s nest of characters. These things – random belongings of humans and nature – have memories, meanings and characters – just as people do. They had their stories to tell as well. And so I began to paint their portraits.”

“It can be an object’s shape and form that catch my eye and I impose human characteristics onto them I suppose; a sensual curve of a cup handle, a mischievous edge of a knife, a laughing jug. I see them as individuals, and just as humans behave differently on their own and in groups, so too do these objects when brought together under one canvas. The canvas becomes the plane for them to exist in and converse with one another.”

“I mostly work from life and occasionally from drawings and memory. I always try to capture the essence of my subject whether it be pinned butterflies, a Chinese bowl or that night by the sea. Because once in paint they have permanence.”
Serena Rowe