Neil Murison, painter and teacher was born in Bath, Somerset in 1930. He attended West of England College of Art. Murison combined teaching and painting successfully, becoming RWA in 1979, and appointed Director of the Academy’s New Gallery in 2002.
He had a long series of solo shows, including Bear Lane Gallery, Oxford from 1963; Oxford Gallery from 1970; and Park Street Gallery, Bristol from 1978. Later ones include Albany Gallery, Cardiff in 1991 and Toll House Gallery, Cleveden in 2001. He has travelled widely in Europe, theCaribbean and Africa.
He has exhibited regularly since the 1960s and achieved early recognition with a series of abstract paintings which were exhibited in successful one-man shows in Bristol, London and Oxford.
‘Blue Channel 1, 1966’ dates from this period and was chosen by Godfrey Pilkington, the eminent founder of the Piccadilly Gallery in Cork Street, London, for exhibition there in 1966, where it was sold to the collector G.L.Harbottle.

NOTE: ‘Blue Channel’ the larger version of this painting was also purchased in 1966 by the Walker Art Gallery, Liverpool and is in the collection of the National Museums, Liverpool. 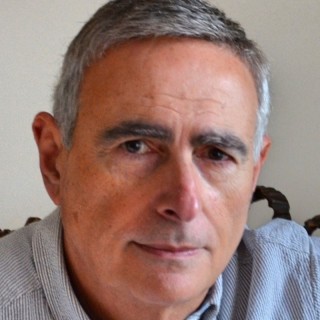