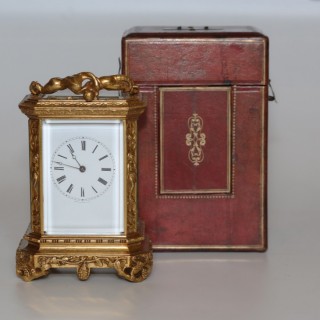 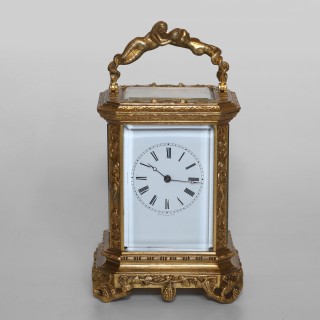 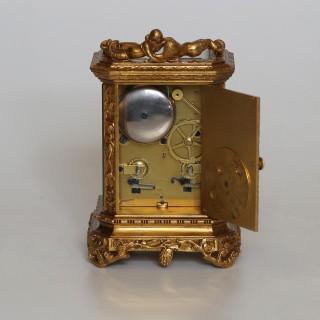 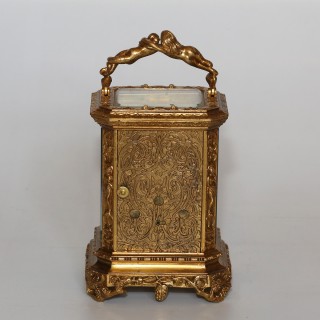 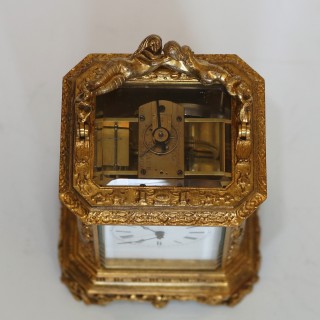 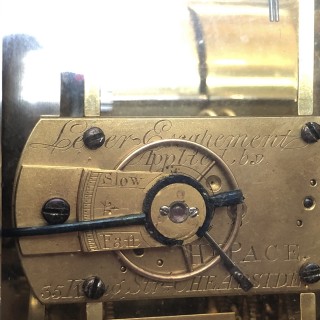 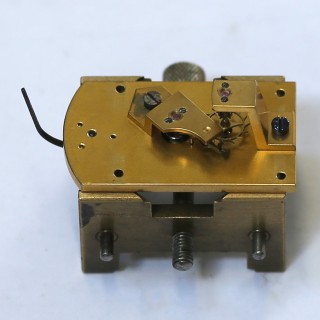 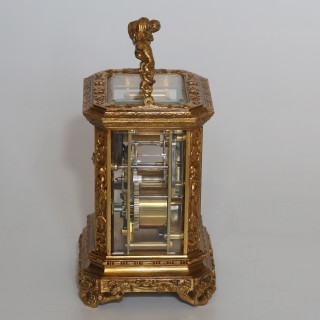 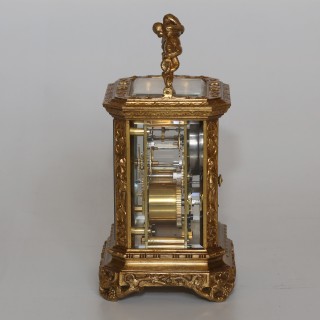 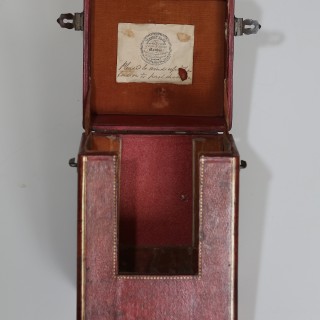 A bell-striking carriage clock by Bolviller & Gontard, Paris. Bolviller (1800-1874) was a comparatively early maker of carriage clocks, his early examples dating to the 1830s. This model is later, probably from the 1860s.

This case design is illustrated on Page 101 of Derek Roberts’  book, “Carriage and Other Travelling Clocks”. The gilt cast brass case is profusely decorated on all sides. The pillars have caryatides, the base is adorned with vines and grapes. Perhaps most striking is the handle which features two embracing serpent-tailed female figures.  The top is fitted with a large viewing glass with canted corners, to deservedly display the platform. The shuttered back door has an eagle to the centre of the rococo design.

The countwheel-striking 8-day mechanism strikes the hours and the passing of the half hour on a bell, a crystal clear tone. The back of the movement is signed BOLVILLER A PARIS, with serial number VV564.

The perfect white enamel dial is signed GONTARD ET BOLVILLER A PARIS. Celestine Phillipe Gontard was a respected platform maker who went into business with Bolviller in 1847/8. C.P. Gontard and Bolviller were jointly granted a patent for a lever chronometer escapement in 1848. Gontard went on to show carriage clocks in London 1851 and patent two further related escapements.

This platform is of fine quality, with the escape wheel and pallets on the underside and a screwed-down endstone. On the upper side, the narrow bridge and platform are finely engraved. It was proudly ‘applied by’ Henry Pace of Cheapside, who engraved it by way of his retailer’s stamp.

Henry Pace (1807-c.1865) moved into the premises at 35 King Street, Cheapside, London following his move from the family workshops at 128 Whitechapel High Street in 1838.

The clock movement is working well, but is to be overhauled and guaranteed for 3 years.

The clock is accompanied with its red tooled leather carrying case, carrying the retailers’ label for Henry Pace in the lid.