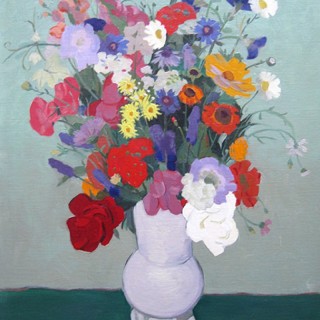 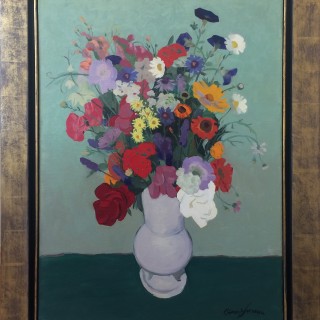 Clement Serveau was born in Paris in 1886. His early work was realistic in the tradition of the Post-impressionists but always with Cubist elements.

He was a student at l’École des Arts Décoratifs in Paris. He began exhibiting in 1905 at the Salon des Indépendants, and later at the Salon des Artistes Français where he won a bronze medal in 1921, silver medal in 1926, and a gold medal in 1929. He exhibited in Greece in 1934 and 1935, and participated in group exhibitions of French artists in London, United States, Canada, and Sweden. Serveau continued to exhibit his paintings widely and in 1937 designed murals for the French Pavilion of Tourism at the Exhibition International in Paris. He was awarded the Chevalier de la Légion d’Honneur.

He was a friend of Louis Marcoussis, an early Cubist, with whom he developed his style into Neo-Cubism. His style of abstraction and use of colour and planes made his paintings unique, with a mosaic-like quality.

Serveau designed frescoes, mosaics, stained glass, and bank notes for the Banque de France and several other countries. He also illustrated several books, including novels by Colette, Duhamel, and Manriac.

His paintings are in many international collections and in the museums of Le Havre, Lille, and the Musée National d’Art Moderne in Paris.