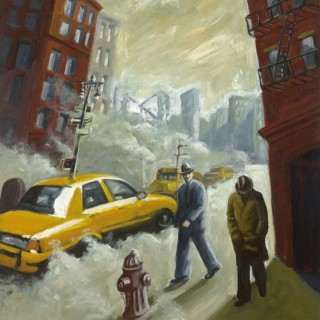 Ken grew up in Swindon and on leaving school at fifteen took up an apprenticeship in the railway works of GWR. Employed as an unskilled hotter of rivets he became fed up of the constant burns on his legs and feet from the white hot metal, so he began to look for a less scarring alternative. Managing to transfer to the relative safety of the Carriage and Wagon Department he was put to work learning the trade of signwriting.

Driven by a nascent desire to paint professionally, and despite his family’s misgivings, he gave up the steady, full time job to study painting at Swindon Art College. This was a deep pool of talent in the 1960s and there Ken made two new friends, the singer Ray ‘Gilbert’ O’Sullivan and Rick Davies, the keyboard player who later founded Supertramp. After graduation the only place for young, talented, singer musician-artists to be was swinging London. Ken and Rick took a flat together in Ladbroke Grove and Ken embarked on a career in commercial illustration. He designed album covers for Gilbert O’Sullivan even contributing backing vocals to one of his tracks and in 1970 his work appeared in the Beatles Illustrated Song Book.

He was contacted by a young schoolboy who asked him for a drawing of Dudley Moore for his magazine The Student, this was his first contact with Richard Branson who was to become his greatest patron. When he started his famous Town House Studios in west London two years later, he turned to Ken to adorn the outside walls with a distinctive trompe l’oeil mural. This relationship lasted over a quarter of a century: Ken covered the walls of Virgin offices, hotels and record stores across the globe. Most notably he designed and produced the famous Scarlet Lady that used to adorn the nose cone of every Virgin jet.

Throughout the 1980s Ken became London’s most exposed muralist, working on the Intercontinental Hotel on Park Lane, Madame Tussauds, Heathrow Airport, and the Kensington & Chelsea Pools. Perhaps the best known being the faux-Georgian town house painted on the massive blank wall of the Royal Opera House overlooking the Jubilee Gardens Piazza in Covent Garden.

For years he has developed a series of figurative oils and original prints informed by his childhood memories in Swindon. The hardship of those times, where heavy industry defined the landscape, and the atmosphere and lives of the town’s inhabitants proves a rich vein of inspiration.